One-on-one with the Independent MP 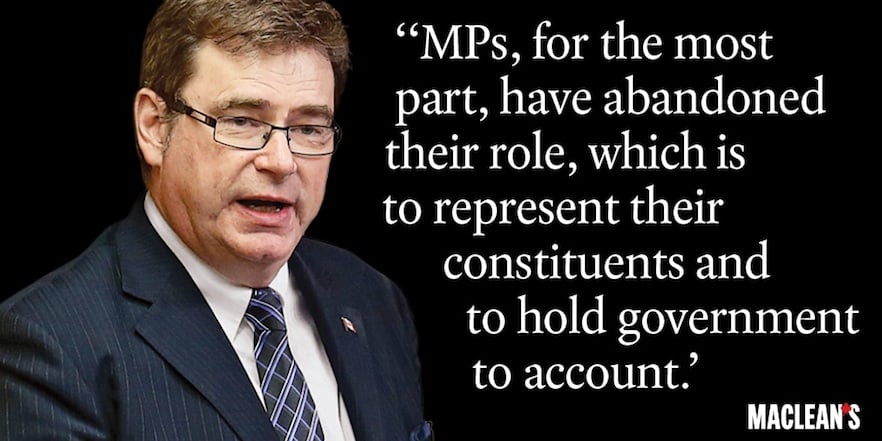 Brent Rathgeber’s book about the state of governance in Ottawa, Irresponsible Government, is officially released this week. At the risk of spoiling the plot for you, he doesn’t think it’s going particularly well (perhaps you gathered as much from the title).

I wrote about Rathgeber’s life as an independent MP back in January and I’ve closely followed his one-man experiment in parliamentary democracy. This week we have an excerpt from the book—the Globe went over some of the highlights and the Post has an excerpt too—and here is an exclusive extended interview with the Independent MP for Edmonton-St. Albert.

Rathgeber himself is interesting in various ways. The book he’s produced serves as a nice companion to the year’s other major study in the state of Parliament, Tragedy in the Commons, written by the founders of Samara. And those two books nicely tee up the House’s impending decision on the Reform Act (even in its new imagined form), which will be debated when Parliament reconvenes next week.

The version of the House of Commons that Rathgeber describes is something all MPs might be asked to confront.

MPs stand and read canned speeches in the House, sometimes on topics they are not at all familiar with. Rather than ask actual questions of the government during QP, Conservative backbenchers are reduced to taking part in scripted infomercials. Committee business is stage managed. When he runs afoul of the government, he is assigned to an obscure committee and has his seat moved to the other side of the House.

I think if you ask the other 307 MPs about all this, you’ll hear 307 different perspectives. I don’t think they all rely on scripts, I don’t think they all submit themselves entirely to their party. But party discipline is an inherent feature of the system and it is reasonable to ask each MP how he or she interacts with it.

And where it matters most is in how it impacts the ability of the legislature to properly hold the government to account. “The House of Commons, especially one in a majority setting, has long abandoned assigning any value to its role of serving as a check on government spending or of vetting proposed government initiatives or legislation,” Rathgeber writes. He is nowhere near the first person to suggest as much, but it’s probably worth remembering to not take that concern for granted.

That the opposition is entitled to the opportunity to stand and yell at the government on a regular basis is a wonderful part of our system. But it shouldn’t obscure the goal of and need for a system that can fully vet and air the laws, programs, policies and concerns of the day.

FILED UNDER: Brent Rathgeber house of commons Inside Ottawa Parliament