The reckoning for right-wing populists is coming

Adnan R. Khan: Politicians who bullied their way to power through fear—like Trump and Turkey's Erdogan—have failed to delivered economic prosperity, and voters are noticing 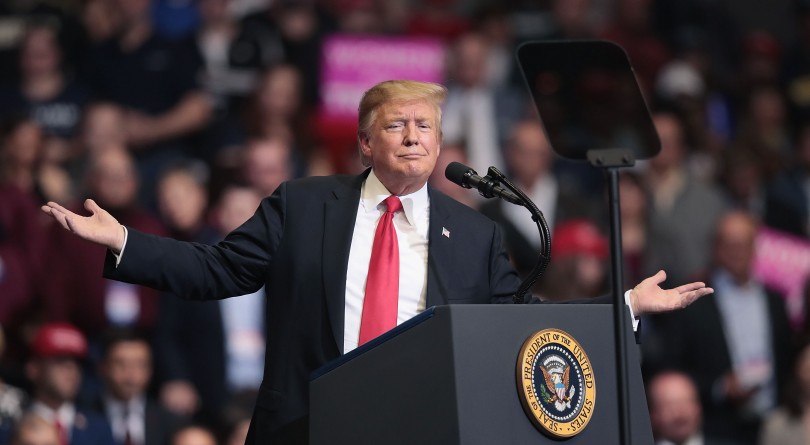 Trump speaks to supporters during a rally at the Van Andel Arena on March 28, 2019 in Grand Rapids, Michigan. (Scott Olson/Getty Images)

First, back in November last year, U.S. voters delivered a noteworthy rebuke to the leadership of President Donald Trump in midterm elections. On March 31, Turkish voters punished their president, Recep Tayyip Erdogan, with a defeat in local elections that many observers here are calling a pivotal moment of change in Turkish politics.

The specific reasons for the losses were somewhat different, but the similarities were striking.

In the lead-up to the midterms, worried about losing their majority in the House of Representatives, Republican candidates leaned heavily on Trump’s popularity with their conservative base. At campaign rallies, Trump was the focus of attention, with candidates taking a back seat to his ranting oratory. It seemed the election was less about local issues and more the Trumpian vision for America and its place in the world.

What was ignored was what mattered most to voters: health care, jobs, declining incomes and a precarious economic future. The Republicans lost the House in a landslide.

In Turkey, the governing AK Party, also concerned about losing control over local politics in its municipal elections, turned to their own popular, and populist, leader. Erdogan embarked on an epic campaign in support of the AK Party’s candidates for mayor in cities across Turkey, delivering as many as eight speeches a day.

Like Trump, he eschewed local issues like Turkey’s deepening economic crisis, rampant inflation or high unemployment. He barely acknowledged the candidates he was supposed to be endorsing. Instead, he talked about the greatness of Turkey, the threats it faced and how only the AK Party, and presumably Erdogan himself, could lead the nation to the global eminence it deserves.

At the polls, Turks punished the AK Party for it. The capital Ankara and the economic hub Istanbul, Turkey’s biggest cities and for years AK Party strongholds, both fell to the opposition People’s Republican Party, or CHP, though the AK Party is challenging the tight results in Istanbul. Other cities that had been under AK Party control fell, too.

In both cases, Trump and Erdogan turned politics into a personality cult. “Erdogan made this election about his leadership and his vision for Turkey,” Ilter Turan, professor emeritus of political science and international relations at Istanbul’s Bilgi University, said. “And now he will have to deal with the fallout of the AK Party’s defeat.”

Related:  When Trump meets Erdogan, who will blink first?

Is populist leadership failing? Not everywhere of course, but in western democracies at least, the experiment with right wing populism appears to have run into a few snags. With Brexit, Britain’s right wing ideologues have hurtled their country down the path of economic crisis; in Hungary, Prime Minister Viktor Orban’s populist economic policies, including slashing borrowing costs and opening the floodgates to cheap credit, have triggered concerns at the European Central Bank; in Italy, the anti-immigrant and anti-EU coalition government led by Giuseppe Conti can’t seem to get anything done.

Populists in all of these countries, not to mention Trump and Erdogan, bullied their way into office through fear—of immigrants, socialists, liberals or anything else that has the scent of non-traditional values—and have maintained their power through a toxic blend of populist economic policies and keeping up the façade of enemies constantly plotting the destruction of the nations they govern.

What they have failed to do is deliver on the prosperity their nationalist policies were supposed to produce. Erdogan is the longest serving example: When he came to power in 2002, he promised to transform Turkey’s economy. For years he seemed to be succeeding. By 2013, GDP per capita had nearly quadrupled, according to the World Bank. Massive infrastructure projects transformed Turkey’s cities and foreign investors flocked to what looked like the Golden Goose of the emerging economic world order.

But the boom was built of a house made of cards. Much of the economic growth rested on government spending and cheap credit. When the crunch time came, the illusion of prosperity crumbled.

The problem, according to Gunduz Findikcioglu, the chief economist at Dunya newspaper, Turkey’s leading economic publication, lies in how ideologically-driven populist leaders like Erdogan and Trump are so enamoured with their own worldviews that they are incapable of digesting contrary facts.

“They have such strong views that they don’t listen to experts,” he says. “They believe they, and they alone, are right. On occasion they may cede to advisors but it usually doesn’t last and they return to beliefs that have no basis in any logical economic theory.”

Erdogan, for instance, has shocked economists by claiming that the way to control inflation is to lower interest rates. Trump has said that tariffs are a net benefit to the U.S. economy but recent data shows they are costing the U.S. $1.4 billion a month.

That disconnect from reality ultimately produces a cost at the ballot box. In the U.S., most economists agree that the real pain from Trump’s economic policies are yet to come. Crises, they say, often take years to emerge after the policies generating them are implemented.

In Turkey, that economic reckoning is now. The loss of Istanbul was especially painful for Erdogan, whose years as its mayor propelled him to the national stage. Under his rule, however, the AK Party and its political predecessors have lost the city for the first time since 1994.

Fortunately for him, there won’t be another election in Turkey until 2023, enough time to right the economic course. But will he? As recently as last week, he again argued that Turkey’s Central Bank needs to lower interest rates to bring inflation under control and blamed the economic crisis on a U.S.-led plot to destroy Turkey through economic warfare, ignoring warnings from business leaders and economists that what Turkey needs most is to reassure investors it is prepared to make the necessary structural reforms to inject predictability into its markets.

Trump has less time. According to economic predictions, the U.S. will face the brunt of the negative impacts of his economic policies in 2020, an election year. It seems unlikely he will shift course before then or, even if he does, if there will be enough time for any shifts to work their way into the economy.

Whether he pays for it at the ballot box remains to be seen but the record of populist leaders suggests he’s in for a rough ride. People will put their ideological beliefs aside when their economic prosperity is at stake, and the only thing populists know is how to push ideological buttons. When it comes to economic levers, they pull with reckless abandon. And they fail.