The remarkable speech and great debate that gave us our flag

Perhaps the finest hour of Lester B. Pearson's premiership 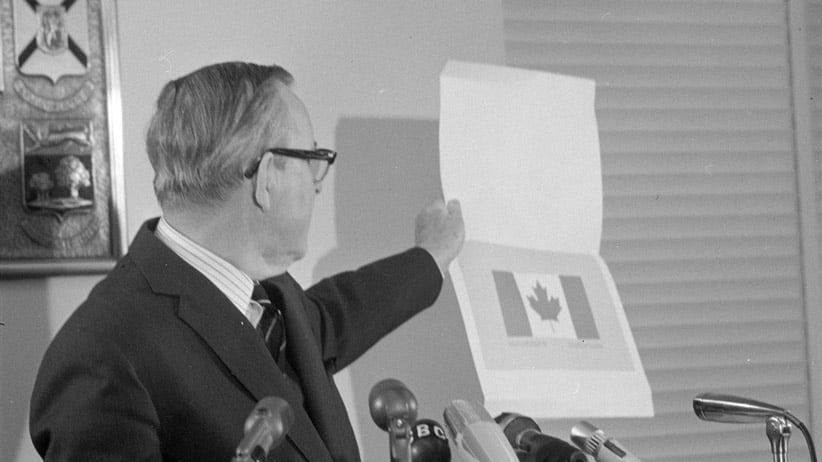 Between February 18, 1964 and April 3, 1965, the House of Commons sat for a total of 248 days, just over 60 per cent of the 410 calendar days covered by the second session of the 26th Parliament. For the sake of comparison, the current session of Parliament has so far covered 487 days, but the House has conducted business on just 171 of those days, a rate of 35 per cent.

A good portion of that difference was the time given to debating a new flag for the country—a debate that started on June 15, 1964 and didn’t conclude until December 15 of that year. That debate is typically described as bitter or acrimonious—this oral history includes one MP challenging another to a duel—but the sheer extent of it is worth appreciating. There are varying accounts of how many speeches were made therein: the Canadian Encyclopedia tallies 250 speeches, historian Allan Levine says 270 and this account puts it over 300. And to the House debate was added the work of the committee that actually selected the winning design: that committee met 41 times.

Debate in the House only ended because the government moved a motion of closure, and even then John Diefenbaker, as leader of the opposition, fumed at the imposed curtailment.

There’s a debate to be had about that debate and whether it represents a great, awful or merely momentous example. (Tom Kent, one of Lester B. Pearson’s advisors, later wrote that the flag debate woefully distracted the government.) It is at least hard to imagine such a prolonged exercise being tolerated now. And it might suggest that there’s something to be said for Parliament moving methodically—or at least that the sky won’t fall if it does. Getting things done is good, but ruminating on things is why we have a Parliament.

For the sake of comparison, here is Peter Van Loan boasting that the government’s first budget implementation bill of 2012—which measured 452 pages—had been the subject of 214 speeches. The time elapsed between introduction and passage of that bill was less than two months.

Perhaps to celebrate the anniversary of the flag, Mr. Van Loan served notice on Friday that the government will move a motion of closure to stymie debate on a contentious motion to have the RCMP oversee security in and around Parliament. The motion only just came before the House for debate on Friday and the government could go forward with closure as early as tomorrow.

But before that remarkable parliamentary exercise, there was a remarkable speech by Lester B. Pearson that is also worth noting.

Though he’d already stated his interest in a new flag, Lester B. Pearson’s real push for that started in May 1964. Among those opposed to replacing the Red Ensign was Royal Canadian Legion. But after first making his case to legion members in his own riding, the prime minister went to Winnipeg to address the legion’s national convention; Pearson choosing, in Tom Kent’s words, “the most critical audience possible” to mark the national launch of his initiative.

Tom Kent wrote that none of Pearson’s advisors were consulted and Levine cites another historian, Norman Hillmer, as saying Pearson decided to make the speech without consulting his cabinet. In a collection of his speeches and writing published in 1970, Pearson explained himself as follows.

I chose this occasion deliberately, though I might easily have arranged to speak to an audience which would have given my views a friendlier reception. I thought, however, that, outside Parliament, the Legion had the right to be the first to hear my statement. I had no illusions about their reaction for I knew their official views. But I got a fair, if somewhat hostile, hearing. It was naturally a difficult speech to make in the circumstances.

Indeed, Pearson was booed and heckled as he spoke. When he mentioned the Red Ensign, the crowd cheered. When the chairman of the meeting then tried to bring the crowd to order, Pearson riffed on Harry Truman’s famous line. “As Harry Truman once said, if you can’t stand the heat, keep out of the kitchen,” Pearson said. He smiled, the crowd laughed and then applauded.

Here is a modern account of that speech and here is a newspaper report from the time, but for a full appreciation of the moment, here, via the CBC archives, is video of the speech.

John English later wrote that it was Pearson’s “finest hour that year, perhaps in his prime ministerial career.”

Now try to imagine something like that happening in the current political context.

If we were still living under the Red Ensign and a prime minister decided tomorrow to introduce a new flag, the announcement of that would surely be made before a basically friendly audience, with a few rows of average citizens lined up behind him, everyone in attendance applauding whatever the prime minister had to say. Stuck to the prime minister’s lectern would be an appropriately party-coloured placard bearing the official five-word phrase for the initiative. And, of course, the announcement would also be done in front of a giant flag (which, in this case, would at least be vaguely applicable to the issue at hand).

Two possible caveats: It’s probably worth speculating about Pearson’s political calculation and his choice to face a hostile crowd might’ve been novel even for the time. But now it seems almost unthinkable—taking a wild political risk and exposing oneself to the sort of open dissent that is basically unheard of beyond the House of Commons. In that regard, Pearson’s speech can be added to the discussion of whether our political leaders are too insulated from the public. We probably can’t expect them to only ever face hostile crowds, but their willingness to do so should be sought and their ability to do so should be tested.

It would be lovely to know that our political leaders were able to handle themselves in the kitchen.