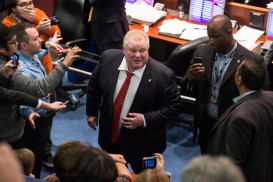 In 2008 Stephen Harper served Stéphane Dion, Michael Ignatieff, Ralph Goodale and the Liberal Party with a notice of libel over claims they had made in the Cadman affair. In 2009 Harper dropped the suit, saying that since Dion was no longer the Liberal leader, the suit was no longer needed. This is probably disingenuous: if you sue Ignatieff and others, and then drop the suit because Ignatieff has become Liberal leader, I get to laugh at you. In the meantime the suit had gone poorly for the Prime Minister. Sweated on the witness stand, he corroborated much (but not all) of the story the Liberals had been peddling. His lawyer quit.

But the merits of Harper’s case aside, there was also some tut-tutting to the effect that a prime minister must not sue an opposition politician, because, well, just because. Much of this huffing came from eminent legal scholars on Dion’s behalf, although if I recall correctly Dion managed to resist joining in the chorus, and it’s a good thing too, because less than two years earlier Dion had sued Gilles Duceppe.

I think Harper had as much right to try his luck in court as anyone. And as much obligation to suck it up when it ended badly. In a career that is starting to have lasted a while, I have never sued anyone for anything, nor been sued. I try not to make it my style to give offence easily, and I also try (this is the bigger challenge, on most days) not to take offence. But libel law exists for a reason, and I think our society is healthier to the extent the law applies as evenly as possible, regardless of one’s station. So I’ve always understood the people I write about might sue me. We’ve sent the odd column, and two books, off to lawyers to stay on the safe side. And while I never contemplated a lawsuit against the people I cover, if one of them said something awful about me I would sue, and I would not let my job title slow me down.

The Toronto Star’s Daniel Dale is suing Rob Ford, Toronto’s mayor, for libel. The details are a matter of public record and will need a court to sort them out. I don’t believe Dale’s case is open and shut, even though I do believe Ford intended his remarks as Dale heard them. But Dale will have much in his favour if this suit gets to court: the TV station on which Ford made the accusations aired them a second time, after it was already clear the mayor had caused an outrage. Given a chance to recant, Ford said he stood by “every word.” He apparently repeated the substance of his claim this morning on a radio broadcast.

Some of the early commentary around this story has suggested Dale is doing something wrong by suing. There seems to be some notion that reporters have special powers — they work for companies that buy ink by the barrel — so they must show particular restraint in defending their rights. Screw that noise. Dale has as much recourse to the courts as Ford ever did, which is as much as this guy suing Naheed Nenshi has, or as much as you would have if your neighbour spray-painted something on the front of your house that you took to be defamatory. Ford announced plans to sue his former employees four weeks ago; he’d have been within his rights, although I do not believe he has followed through.

I reject the notion that a job at a news organization makes somebody fair game for vile slander. I claim for myself the same rights I have always assumed in the people I write about. A judge will decide the merits of Dale’s case, but each of us has a right to his own opinion, and from what I know of the case at hand, I’m glad he’s suing.