The scandal that could stick to Obama 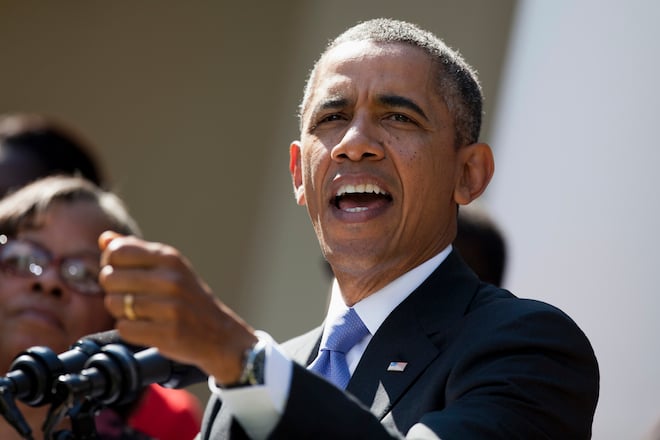 WASHINGTON – For nearly five years, Republicans have struggled to make a scandal stick to President Barack Obama’s White House. One by one, the controversies — with shorthand names such as Solyndra, Benghazi, and Fast and Furious — hit a fever pitch, then faded away.

But some Republicans see the disastrous rollout of Obama’s health law as a problem with the kind of staying power they have sought.

The health care failures are tangible for millions of Americans and can be experienced by anyone with Internet access. The law itself is more closely associated with Obama personally and long has been unpopular with the majority of the American people.

The longer the technical problems persist, the more likely they are to affect the delicate balance of enrollees needed in the insurance marketplace in order to keep costs down.

“There’s no question the issue has legs, in part because it affects so many Americans very directly and in part because the glitches with the website are simply one of many fundamental problems with this law,” GOP pollster Whit Ayres said.

The cascade of computer problems began Oct. 1, when sign-ups opened for the marketplaces at the centre of the law. Administration officials blamed the problems on high volume, but have since acknowledged more systemic issues with HealthCare.gov.

White House officials contend the website is just one piece of the broader law offering an array of benefits. They say that when the online issues are fixed — the latest estimate is the site will be working normally for most users by the end of November — few people will remember the problems that have marred the opening weeks of the six-month enrolment window.

“It says a lot about Republicans that their focus here is not on helping Americans get insured, but on making political hay of this mess,” said Dan Pfeiffer, Obama’s senior adviser.

There’s another mess the White House is dealing with that could have long-lasting implications, too: U.S. government spying on foreign leaders. The scope of the surveillance programs was first made public in June and the revelations keep coming. The latest concern the alleged monitoring of German Chancellor Angela Merkel’s cellphone communications.

But unlike with the health law, many Republicans support the government surveillance policies, making it more difficult for the party to create a political furor over the revelations.

For GOP lawmakers, the White House’s stumbles on the Affordable Care Act have come at an optimal time, just one week after their strategy to shut down the government in exchange for concessions on health care imploded.

The health care debacle has overshadowed some of the Republican missteps and the GOP appears more than happy to keep the spotlight where it is.

Republicans have scheduled a series of congressional hearings on the program’s shortcomings, and have called for officials, including Health and Human Services Secretary Kathleen Sebelius, to be fired. She is set to testify this coming week before a House committee.

Kevin Madden, a GOP strategist, said Republicans should be wary of overreach, and he urged the party to “focus on the basics” in the hearings. If they do, he said, “they can really align themselves with a lot of public anxiety about what’s wrong with Washington.”

Anxiety about the website’s problems also appears to be on the rise among members of the president’s own party, a worrisome sign for the White House.

Ten Democratic senators urged Sebelius in a letter to extend the insurance enrolment window beyond the March 31 deadline; White House officials say they don’t believe that will be necessary. Also, Democratic leaders have been critical about the seeming lack of preparedness for the sign-up rollout.

“As far as I’m concerned there is no excuse for that,” Senate Majority Leader Harry Reid, D-Nev., told Las Vegas radio station KNPR. “I think the administration should have known how difficult it was going to be to have 35 million or 40 million people to suddenly hook up to a place to go on the Internet.”

The health care law has been unpopular with large swaths of the American public ever since Obama signed it into law in 2010. A CBS News survey taken last week found that 43 per cent of Americans approve of the law, compared with 35 per cent in May.

Crisis management expert Eric Dezenhall said that if the White House wants to prevent the current troubles from being a long-term problem, it will have to do some basic damage control.

“There has to be a component of hand-holding, clarity and bedside manner with the early stages of Obamacare,” he said.

The White House appeared to start taking a page from that playbook this past week.

On Thursday, the Centers for Medicare and Medicaid Services began holding daily briefings to address technical problems with the website, though the many of the issues still remain shrouded from the public.

Republicans are turning to a familiar tactic, congressional hearings. It’s the same tactic they took as they looked to connect Obama to wrongdoing in the deaths of Americans in Benghazi, Libya, the bankruptcy of the solar energy company Solyndra, the Bureau of Alcohol, Tobacco, Firearms and Explosives’ failed gun-smuggling sting operation known as “Fast and Furious,” and a number of other problems that have arisen since the president took office.

“This is more than a website problem. We are also concerned about what happens next,” GOP Rep. Fred Upton of Michigan, chairman of the House committee that will hear from Sebelius on Wednesday, said in the Republicans’ weekly radio and Internet address.

Dezenhall said that while investigations may help Republicans do some damage to the health care law, “there’s a difference between roughing up your enemy and defeating them.”

“They can certainly put some points on the board but I don’t see a great Republican coup anytime soon,” he said.