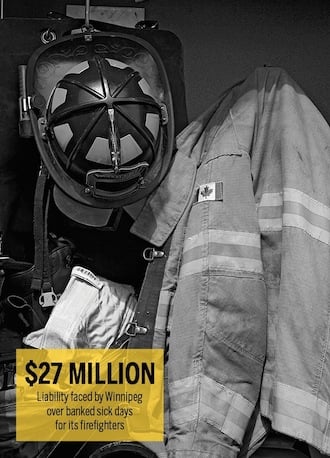 Something ails Ontario’s teachers. Male and female educators, in Catholic and public school boards alike, are falling ill in record numbers. This troubling, pernicious illness tends to strike hardest on Fridays and Mondays, particularly when the sun is shining.

On one sunny Friday last month, almost one in five teachers called in sick in suburban Toronto’s sprawling Peel district, leaving officials scrambling to fill the void. In the Toronto District School Board itself, figures show 6,500 more teachers were absent with an illness this May than in either 2011 or 2012. In one Toronto school, every day this spring, 25 per cent of the teachers were off sick, says Toronto trustee Jerry Chadwick, a former principal.

The country’s Public Health Agency reported little or no flu in Ontario in either May or June. Rather, officials argue the sudden wave of ill teachers is fallout from contracts Queen’s Park imposed earlier this year.

While the contracts allotted many teachers 16 days of sick and personal leave, they ended the right of new teachers to bank unused sick leave year-to-year, only to cash it out at retirement, a parting gift that had been worth a maximum of $46,000. Barred from storing up unused sick days, some teachers have taken to treating their sick and personal leave as an additional three weeks of vacation time, atop their two-month summer break.

And so what seemed, fleetingly, like a win for Ontario’s cash-strapped government could cost taxpayers tens of millions of dollars a year for substitute staff. School officials need only look west to appreciate the scale of the problem: Last year, absenteeism cost the Vancouver School Board $20 million. “It’s a mess,” says Toronto trustee Howard Goodman. “Boards are facing a serious financial hit.” And it’s not just teachers.

The public sector is rife with rampant sick-day abuse. The problem has been building for decades, creating huge financial burdens for governments. Officials are taking steps to rein in this type of perk and bring the public service more in line with the workplace realities faced by most Canadians, who have short-term disability plans, not bankable sick days at 100 per cent pay. But some fear a battle with government workers is brewing that could paralyze basic services.

Spend some time scanning public sector collective agreements, and you start to realize just how generous sick-day leaves can be. Consider the following: 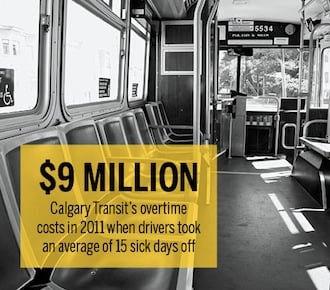 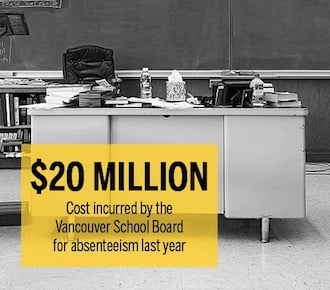 • Professional employees in the government of Quebec earn 12 sick days per year and can use them for early retirement or cash them out on retirement.

• City of Niagara Falls workers get 20 sick days per year; 18 per year can be carried over for a cash payout at retirement (up to a maximum half-year’s salary).

• Employees of Ontario’s Workplace Insurance and Safety Board can convert five of nine annual “wellness days” to vacation time, and earn a cash payout on retirement worth 50 per cent of unused sick days to a maximum of a half year’s salary.

• Calgary schoolteachers can be awarded up to 90 calendar sick days per year. Given how prevalent sick-day perks are in the public sector, it shouldn’t be a surprise that predominantly government towns have the highest overall rates of worker absenteeism in the country—in B.C.’s capital, Victoria, 11 days are lost to sickness in a year, while Gatineau, Que., across the river from Ottawa and home to many federal offices, the average is 12 days. (By comparison, in Guelph, Ont., Calgary and Toronto, the average worker books off around seven days.)

• New Brunswick government employees get 15 sick days per year; 240 can be carried over.

Now many Canadian cities are waking up to the financial shock of these lavish promises. A new audit of Calgary Transit found that in 2011, bus drivers called in sick an average of 15 times per year. That also meant other drivers had to work extra hours, leaving the city with a $9-million bill for overtime. In Toronto, the city’s sick-leave liability totals $490 million. The liability for firefighters alone in Winnipeg—where, as in many municipalities, firefighters cash out banked sick leave on retirement—is $27 million. 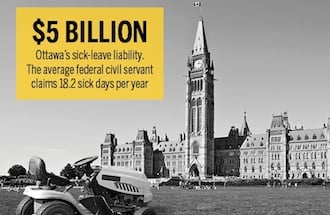 But it is in the federal government where the sick-day culture has become most deeply entrenched, and where the damage appears greatest.

At the federal level, where 19,000 civil servants phone in sick every day, the sick-leave liability has ballooned to $5 billion. The average federal civil servant now claims 18.2 sick days per year, roughly trebling the private sector average of 6.7 days, giving federal government workers the highest rates of absenteeism in the country.

And as Treasury Board President Tony Clement has noted, the closer they get to retirement, the sicker they seem to get. Retiring employees used an average of 45 sick days before retiring in 2009-10—two full months off work.

With the federal rate so out of scale, the Harper government just announced plans to crack down on “exceedingly” high absenteeism among civil servants. Reforms would focus on getting sick and injured civil servants back to work faster, by introducing a short-term disability program. And Ottawa hopes to reduce from 15 to as few as five the number of unused sick days civil servants can carry over. “Age-old entitlements like these,” says Clement, “serve as a tax on Canadians.”

The prospect of losing sick leave has created uproar among civil servants, raising the spectre of labour unrest as collective agreements begin expiring in the next year. “We are not interested in trading off sick leave. It is not going to happen,” said Robyn Benson, president of the Public Service Alliance of Canada (PSAC), the largest union representing civil servants. “We are not trading, it, selling it, swapping it or giving it away.” If unions negotiating contracts dig in their heels, the Harper government could impose changes through legislation, which could spur labour unrest.

Much of what drives public sector angst is the stubborn belief that the private sector is doing far better. At one point, that argument may have been valid. As recently as 1991, public sector workers lagged the private sector in pay by an estimated eight per cent. Until the 1960s, few had collective bargaining rights. None could strike. So to make up for the lower pay, government workers were granted better benefits—better pensions, better leave time, and other perks, such as sick-day banks.

There has been a complete reversal in the decades since. While union membership has collapsed in the private sector, Canada’s public sector unions grew in strength and power. That helped them negotiate big pay increases. In April, when the Fraser Institute published a comparison of public and private sector wages, the conservative think tank found public sector workers receive double-digit premiums over those doing the same job outside government. In Ontario, government workers now earn 14 per cent more than their private sector counterparts.

Those gains matter little to government workers as their bosses tackle chronic absenteeism. It’s a battle familiar to Andrew Graham, who spent three decades in the public sector before moving to Queen’s University to teach public sector management. The system is “designed to resist the capacity to manage,” says Graham, a former warden at Kingston Penitentiary who recalls being slapped with union grievances—and even once a human rights complaint—after challenging employees about their absences. Workers, Graham says, were pressured by peers to maximize sick time to inflate overtime needs. Abuse was widespread. “A significant amount of sick leave occurred the day before and after [scheduled] leave,” he recalls. “If someone had three days off starting Friday, you could predict they’d be sick on Tuesday and Thursday.” The system is “designed to invite abuse” and managers have no recourse. “Government,” he adds, “has created a monster.”

Business representatives agree. “PSAC claims the Harper government has cut federal departments to the bone,” says Dan Kelly, CEO of the Canadian Federation of Independent Business, “but how many jobs could be saved if civil servants weren’t taking almost four weeks’ sick leave every year?”

Unions have explanations for the epidemic of absenteeism: By removing their ability to cash out unused sick leave, teachers have been “discouraged from showing up for work,” says Terry Hamilton, president of the Ontario Teachers’ Federation. PSAC claims the federal workplace has grown “poisonous.” Benson says civil servants simply want to be treated with “dignity and respect.”

But critics argue taxpayers deserve the same courtesy. At the very least, that means going to work when you’re well—even when you’ve still got two sick days in the bank and there isn’t a cloud in the sky.