The singular allure of a real debate 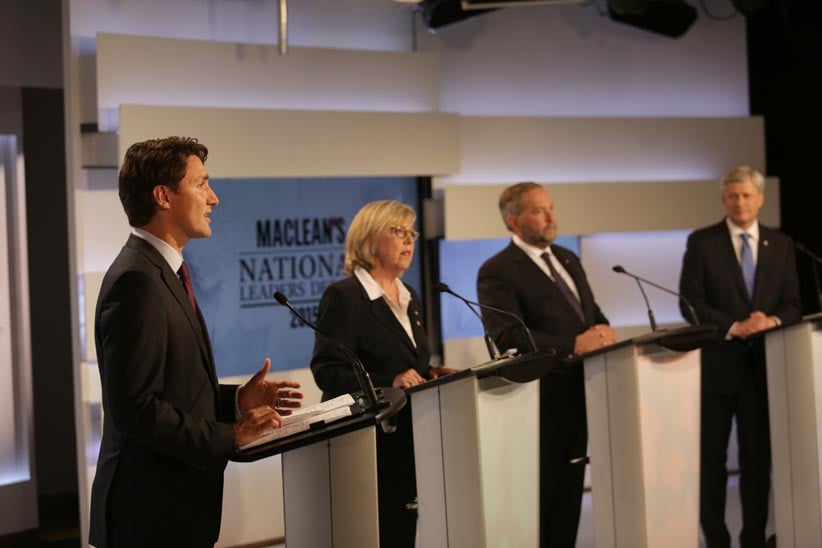 This was Justin Trudeau’s message to supporters on Thursday afternoon, the subject line of an email that went out 5½ hours before he arrived on stage.

“I know that thousands of Canadians will be watching the debate,” he wrote, “and thinking about the future of our country.”

Possibly this was understating the viewership, but otherwise here was a defensible assessment of the stakes. The future of the country. To be personified and settled by four people in business attire spaced evenly apart inside a rectangular TV studio situated on the edge of Toronto’s Yonge-Dundas Square (a concrete clearing built to be surrounded by the towering and glimmering icons of familiar brands) and down the street from some of the great city’s grandest venues (Massey Hall, the Mirvish, Elgin and Winter Garden theatres).

Separately rehearsed and scripted, the performers arrived aboard colour-coded buses emblazoned with their faces and slogans, to be cheered and greeted by sign-wielding partisans who had gathered to chant and pose for the cameras. It is a show, and these are performances, but, for all the preparation and risk-aversion, the live debate still offers the allure of the unpredictable, the distinct hint of danger. Not for nothing is it sometimes likened to boxing. Each best-laid plan is set against the others. For two hours, the party’s designates are put before the public without intermediaries. Before the clipping, fact-checking and analysis, there are only four people on stage, alone and without refuge. As noted elsewhere this week, it is a unique moment in the modern campaign. And not even the House of Commons—with its rival cheering sections of supportive backbenchers and its stilted formalities—offers the alluring simplicity and possibility of the televised debate.

Of the four individuals who stood behind podiums on Thursday night, it was Trudeau who seemed to have the most at stake. It was his situation that seemed the most precarious—trailing in the public opinion polls, some large amount of money spent by Conservatives persuading television viewers that he is not ready to lead the federal government. Two hours of questioning and challenge on live television was a chance for him to either refute or confirm the commercials. And confirmation probably would have been ruinous. It was relatively easy to imagine him outclassed or overwhelmed, or simply relegated to a secondary role beside the clash of Stephen Harper and Tom Mulcair.

He seemed almost to want those stakes, or least not to hide from the narrative, inviting photographers and cameramen to a basement gym on Yonge Street on Thursday morning to watch him spar with a boxing coach (directly recalling the charity boxing match that seemed, strangely, to launch his meteoric ascent to the status of serious contender to be the next prime minister). And in his earliest moments, he seemed to still have the adrenalin of the ring—coming forward, interjecting and jumping on every opportunity to be heard. The first half-hour, on the economy, was his strongest round. He is not as smooth as Harper or Mulcair—when pressed, his thoughts are broken up by the uhs of someone searching for the words—but he was not timid and he was not obviously beaten. And that presumably means he is still in this. (After two hours of fighting, his closing statement was a practised attempt at poetry that was jarring in its change of delivery. It will be variously received as inspiring or silly.)

Mulcair, by contrast, seemed initially reluctant, waiting even for the moderator, my colleague Paul Wells, to recognize him before speaking. This was perhaps purposeful, a conscious attempt by a generally and proudly aggressive man to avoid seeming too aggressive in what might’ve been many viewers’ first long look at him. At one point, he lectured on the personal income tax rate in New Brunswick. He advanced more as the debate progressed and was typically formidable on his feet—quick with numbers and seemingly straightforward appeals—and tried to smile from beneath that beard and he might’ve walked off stage believing that he’d done well. If Trudeau wanted to talk about style (how politics should be practised), Mulcair wanted to talk about experience (his time in provincial government). The contrast is at least intriguing.

In this situation four years ago, Stephen Harper merely pleaded for reasonableness. Here he had also to fight. And he can do that well. But he did not obviously trounce his competition, or at least this group of opponents, blessed of the accumulated complaints of another four years, were better able to fight.

And then there was Elizabeth May, a one-woman reality check, ever reminding the incumbent of things he’d said or facts he’d not mentioned.

There was an extended exchange about the theoretical thresholds for provincial secession that was either a hint of real trouble for Tom Mulcair or a wholly baffling tangent for the vast majority of the electorate (or possibly both). May made an interesting effort at pestering Mulcair about a proposal to run a pipeline through Vancouver. Trudeau was forced to contend with his party’s position on C-51. And Harper had to reckon with his handling of the Senate.

And then it was over—a two-hour rush of arguments and claims, perhaps ultimately down to ephemeral questions of manner and tone. Any attempt at picking a winner would only be a guess. Such is democracy.

It is a compliment to say it left one wanting more.

“I want to say that it will be a shame if we don’t have more debates,” May said in her closing statement.

This was self-serving—while it’s unclear whether there will be another televised debate of any kind, it’s particularly unclear at this point whether the Green party leader will be invited to any such debate. But it’s also basically true. Tonight was important. But there is more here than a two-hour show. There is a mini-series at least. There are 10 weeks left to work through much of it. But it would be a loss in spectacle and reality if this is the last occasion on which these four people are put on a stage and made to deal with each other directly.