The stubborn state of federalism in Canada

When federal and provincial governments clash, there’s usually at least a desire to make progress. Not this time. 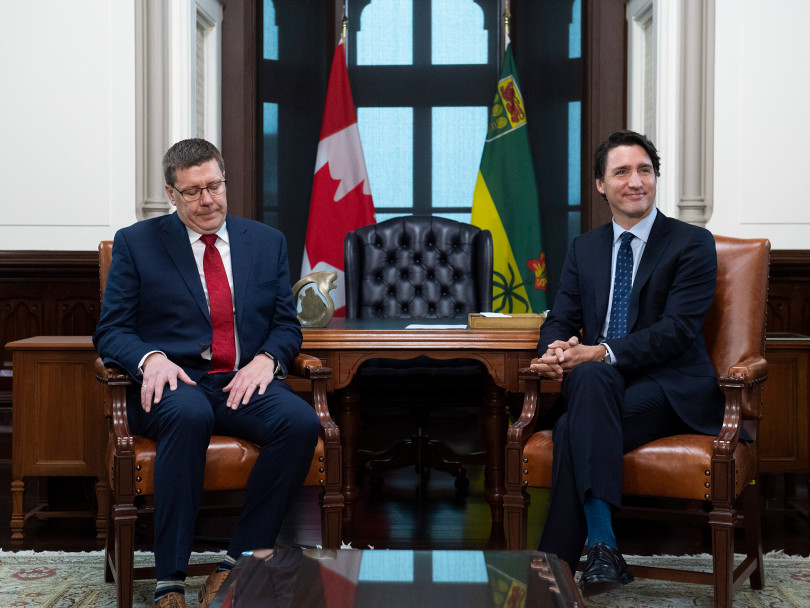 For a glimpse into how regional conflict might dominate our politics in 2020, watch the body language—and the response from Justin Trudeau’s office—when a provincial premier comes to Ottawa these days.

“I came here in good faith today,” Moe told reporters after the meeting ended. “Disappointingly, what I do see after meeting here today is that we’re going to see more of the same from this prime minister.”

Moe’s wish list was roughly the opposite of Trudeau’s re-election platform. The Saskatchewan premier wanted Trudeau’s carbon tax put on hold for a year; he wanted equalization renegotiated to Saskatchewan’s benefit; and he wanted more new pipelines built, beyond the Trans Mountain pipeline expansion. “I did not hear a commitment from him to move forward on those items,” Moe said.

READ: Why Canadian federalism is bigger than Ottawa and the provinces

No, Moe replied, he isn’t, but that was pretty much the end of that scrum. The Prime Minister did not come out to give reporters his version of the meeting. But Trudeau staffers spent time, both before and after Moe spoke, pitching a spirited rebuttal to Moe’s account.

“What that sounded like was the opening speech of his re-election tour,” a Trudeau adviser, who’d been in the meeting, told milling reporters as they waited for Moe to appear. Saskatchewan voters will elect a new government by autumn.

The PMO staffer, speaking anonymously, said Trudeau had asked Moe to acknowledge a few key facts: most consumers receive bigger rebates from the carbon-tax program than they pay in carbon taxes; the Trudeau government bought the TMX pipeline as an expression of its determination to get resource projects to market. The Saskatchewan premier had declined to admit such things. A few hours later, a PMO communiqué confirmed Trudeau’s version of the meeting, in detail and at unusual length.

That a meeting like this comes with an oral prebuttal beforehand and a written rebuttal after is a measure of the depth of—animosity? wariness, at least—that runs through the federation in the wake of a divisive election. In that atmosphere, it’s hard to imagine federal and provincial governments working together to find lasting solutions for Canadians.

READ: The clock is now ticking on Trudeau’s minority government

Premiers and prime ministers used to meet all the time for sometimes-acrimonious meetings that would, nonetheless, lead to real agreement on big files such as health care funding and, a couple of times during the 1980s, big constitutional change. And bilateral meetings between prime ministers and premiers used to allow progress even when the principals were otherwise feuding: think of Jean Chrétien cutting ribbons on big infrastructure projects with Ontario Conservative premier Mike Harris, or with Parti Québécois premiers of Quebec on projects that improved both sides’ electoral prospects.

Trudeau has met since the election with a few premiers, including Moe and Manitoba’s Brian Pallister. He’s said he hopes to meet the premiers, as a group, in the new year. But executive federalism—joint decision-making by federal and provincial governments, as opposed to routine management of files by lower-level government officials—has almost never had a lower profile in Canada. Under two consecutive prime ministers, Stephen Harper and Justin Trudeau, the federal and provincial governments have preferred to make big decisions in isolation. Or to reduce their interaction to a succession of insults and catcalls.

Canada has seen its share of name-calling between prime ministers and premiers since the country was founded. Ontario premier James Pliny Whitney once called Wilfrid Laurier’s justice minister “the most infantile specimen of politician” he’d ever met, University of Victoria historian Penny Bryden writes in her book A Justifiable Obsession, about relations between the Ontario and federal governments. Decades later, Mitch Hepburn warned Mackenzie King not to “smash this confederation and stir up [a] possible racial feud in your efforts.”

But behind the name-calling there was usually a desire to make progress together too. Ontario’s first significant post-Confederation premier, Oliver Mowat, disagreed with Sir John A. Macdonald on just about everything, Bryden writes. Yet Macdonald wrote to Mowat in 1872 to suggest the two of them “try to work the new machine . . . with as little friction as possible.”

New prime ministers are always sure they can ring in a new era of co-operative federalism. Paul Martin believed that was his advantage over Jean Chrétien. Stephen Harper believed he’d work with the provinces better than any Liberal, mostly by staying out of their areas of jurisdiction. Justin Trudeau believed he’d be a balm to heal the bad memories of the Harper years. It’s “a perpetual renewal of naïveté,” University of Toronto political scientist David Cameron said in an interview.

Soon enough eternal frictions reassert themselves, Cameron said. He was once a constitutional adviser to former Ontario premier David Peterson, and his advice to Trudeau is to do more or less what Harper did after 2008: avoid the premiers as a group and meet them singly if at all. “If I were Trudeau, I wouldn’t relish bringing that group together and trying to do business with them.”

But Bryden said it’s not all acrimony as usual. Even as two consecutive prime ministers have worked to avoid being ganged up on by the premiers, the premiers are losing the knack of ganging up. “I don’t see as many long-standing cross-provincial alliances that provide a counterweight to Ottawa as we used to see,” she said. “So something like the Confederation of Tomorrow conference doesn’t happen.” The reference is to a 1967 meeting of nine provincial premiers on Canada’s future. The meeting was an initiative of the then-Ontario premier John Robarts. British Columbia’s W.A.C. Bennett sat it out. At the conference, the participating premiers drew up the list of issues and, to some extent, the demands that would drive Canada’s constitutional politics for the next 15 years.

Compare and contrast. In 2003, on the suggestion of Quebec’s rookie premier Jean Charest, the premiers decided to transform their annual meetings into something more formal, a Council of the Federation with a permanent secretariat. Since then, the council has been, if anything, less productive than the old ad hoc meetings were.

A 2018 paper by Jared Wesley, a former Alberta provincial civil servant turned political scientist at the University of Alberta, noted that Canada’s premiers have “seemed to struggle” to influence the national agenda. That’s largely because they’ve “failed to establish a consistent, well-defined set of common priorities.” So much so that most coverage of the annual premiers’ confabs, Wesley found, is contained in opinion columns making fun of the premiers for even trying.

All of which helps explain why, when Scott Moe asked Trudeau for changes to equalization, Trudeau made a mischievous proposition: he’d be happy to consider any change to equalization on which the premiers can agree on among themselves when they meet, without Trudeau, in December. It was like inviting the fox and the hens to agree on protein management strategies.

This article appears in print in the January 2020 issue of Maclean’s magazine with the headline, “A disturbance in the federation.” Subscribe to the monthly print magazine here.