The supposedly 'doomed' media makes its presence felt in the campaign

Election Image of the Day: The press can seem invisible—until you suddenly see it 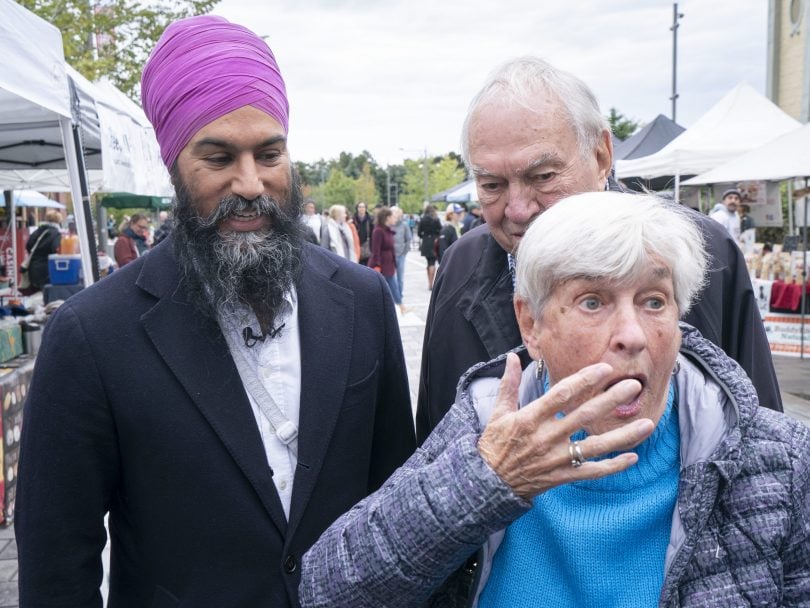 Usually, members of the media reserve their “Gotcha!” moments for political candidates, not random folks. Yet here they shocked an unsuspecting woman at a farmers’ market in Ottawa who found herself in the crosshairs of a battalion of cameras aimed straight at two NDP leaders—one current and one former. Jagmeet Singh and Ed Broadbent seem pretty amused by her surprise, and rightly so; to them, this is everyday life. Reporters, videographers and pundits pack themselves into their own bus to ride alongside the leaders, comprising as large a contingent as the campaigns themselves. Despite shrinking newsrooms and a fractured media landscape, fresh upstarts are still trying to claw their way into media officialdom. (For evidence, scan over a few hundred miles to Toronto, where Ezra Levant and his cohorts fought successfully in court Monday to earn official credentials to the leaders debate—something even the judge noted seemed unnecessary, since “you get precious little from accreditation” that you don’t get simply watching live at home.) With so many blurry smartphone photos and videos breaking stories this campaign, this poor woman reminds us how invisible the media may seem—until you actually see them.