The Tory MP who made his peace with Pride Week

Alberta MP Jim Eglinski once disapproved of homosexuality and saw "no need" for Pride. Then his grandson came out. 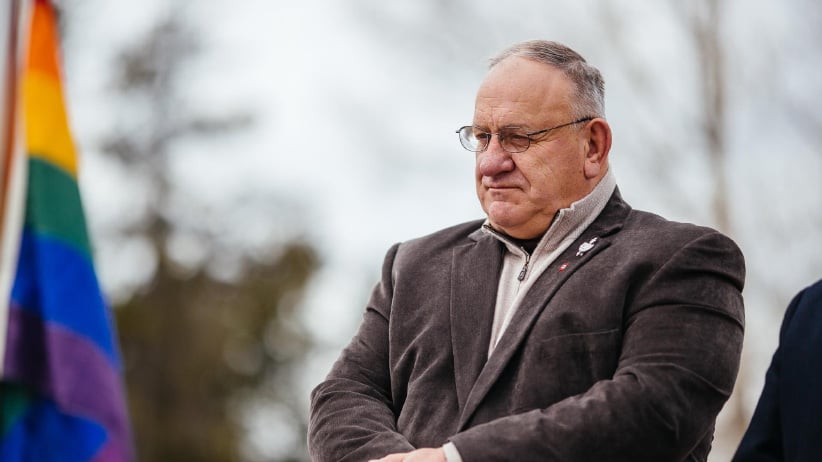 Jim Eglinski shrugs off his participation in the flag-raising to kick off Pride Week in Jasper, Alta., as no different from a French school’s Franco-Albertan flag ceremony in Hinton, an hour’s drive east. “They invite me just like hundreds of other organizations around the riding, and I treat them the same as others. If I can make it, I‘ll be there,” says the MP for Yellowhead, which covers a vast swath of small-town and rural northwest Alberta.

But it’s an act that sets him apart from the majority of his fellow Conservative MPs. When Pride hits their towns, most find a senior’s home celebration, a dragon boat race, a fundraising barbecue or any event but a rainbow-hued parade to attend instead. Eglinski surprised Jasper Pride organizers by how quickly and affirmatively he responded to last year’s invitation; for the mountain resort town’s event this year, he apologized that his Ottawa duties prevented him from helping raise the rainbow flag, but brought his wife Nancy to the festival’s reception for VIPs and sponsors, which included TD Bank, CTV and Jasper’s world-famous Fairmont hotel.

The Conservative Party remains one of the last groups to resist celebrating (or acknowledging) LGBT rights; new leader Andrew Scheer has continued predecessor Stephen Harper’s practice of skipping Pride events, and party members only dropped formal opposition to same-sex marriage in 2016, having resolutely voted against marriage equality in 2005. Eglinski, a former RCMP officer, has also had to be dragged toward greater acceptance: in 2003, when he was a councillor in Fort St. John, B.C., confessed to a local newspaper he didn’t condone homosexuality and would oppose proclaiming a Pride Day in the self-proclaimed “Energetic City.”

“I don’t think there’s a need for it,” he had said. “I probably wouldn’t support it, but I do not hold it against them.”

READ MORE: The Conservatives don’t show up for Pride, and that’s a problem

A few years later, his grandson said he wanted an earring. “And I said: well, you can put it in but it’s going to hurt when I pull it out,” Eglinski recalls. A few years later, the Alberta-bred politician moved back to the province to be closer to his family, and won the perennially Conservative federal seat in a 2014 byelection with 63 per cent of the vote. Another grandson made a different declaration: Papa, I’m gay. “I needed to rethink my thinking,” the elder Eglinski confessed.

Eglinski surprised Jasper Pride organizers by telling this story at his first flag-raising event. “I’m so proud of him for stepping out and admitting that and coming forward,” said Eglinski to heavy applause, according to the Fitzhugh of Jasper. “As times change, and as we see the swing that happens in Canada, we have to open our minds and be cognizant of what’s taking place out there.”

Ricardo Miranda, Alberta’s first openly gay cabinet minister, stood alongside Eglinski, as did the riding’s current NDP provincial politician. They all donned white toques with the Jasper Pride logo on them. There are photos of this on Eglinski’s website, with the caption “celebrating diversity.”

Jasper, a national park town of 4,590 residents, isn’t the largest community in his riding, which straddles the Yellowhead highway from just outside of Edmonton on west to the B.C. border. But the tourism hub has an LGBT community the likes of which doesn’t exist in Hinton or Edson or the rest of his district, which is defined largely by petroleum development, agriculture and forestry. Has he received any grief from less tolerant rural constituents? Never; a Maclean’s writer is the first person to call or write about it. Eglinski has heard the debates inside his Conservative caucus about it, and acknowledges that some colleagues have “strong feelings.” Ontario MPs Tony Clement and Karen Vecchio are regular attendees at Pride celebrations in their ridings. Saskatoon MP Brad Trost, during his leadership campaign, declared he would never march in a Pride parade, and pointedly placed “gay pride” in quote marks in his written campaign material. Eglinski tolerates that, too: “Some of them won’t go because they don’t believe in it. And that’s their personal belief and you just have to respect that.”

In some quarters, there is fatigue or disillusionment with politicians joining the marches. Halifax’s alternative weekly newspaper, the Coast, called Prime Minister Justin Trudeau’s attendance at Halifax Pride “pinkwashing,” and quoted one activist saying the straight, white bigwig’s attendance shifted focus from marginalized voices. But in a small town like Jasper, where the struggles for acceptance have taken longer, it’s a big honour when politicians come, says Pride co-chair Cody Murdock. “It’s not that we feel the need to be validated, but it was more–just to be recognized,” he says. “Yeah, maybe it is a validation.”

Twelve years after the same-sex marriage debate ended, it’s still not the norm for Conservative MPs to partake in what are some of their communities’ largest annual gatherings. Statistical probability would suggest that Eglinski cannot be the only Tory member with an openly gay son, daughter or grandchild. Yet even his views have limits; he’s reluctant to ever join a Pride march. “I don’t know if we need parades to go out and broadcast stuff like that,” Eglinski says. “Why do they have to?”

Lucky for him, Jasper holds its Pride week in March. In the northern Alberta Rockies, that’s no time to hold a parade.