Politics Insider for Jan. 28: Ottawa police for an onslaught of trucks; Erin O'Toole agrees to meet with trucker protestors; the Conservative party tried to find its footing 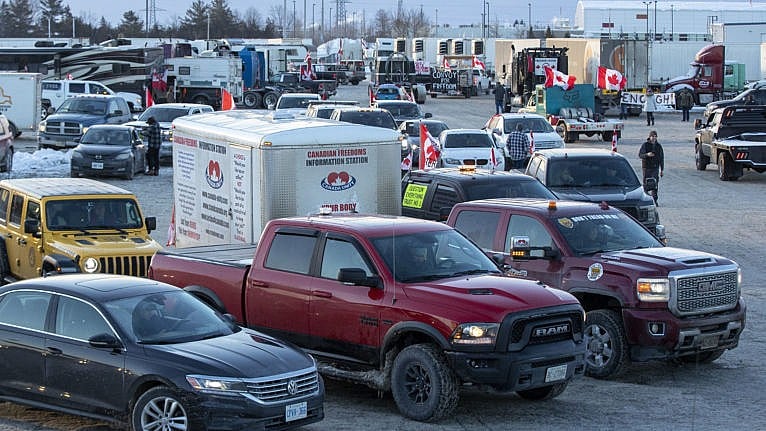 Vehicles with Canadian flags, part of the “Freedom” convoy, line up before the departure from Kingston to Ottawa, Friday, Jan. 28, 2022. (Lars Hagberg/The Canadian Press)

The Ontario Provincial Police told the National Post it was unaware how many trucks were in the various convoys, but Ottawa police said Wednesday that they were preparing for the arrival of between 1,000 and 2,000 vehicles. Media reports suggested around 400 vehicles — truck and personal cars combined — were in the convoy coming from the west that gathered in Thunder Bay on Wednesday, while other convoys launched from southwestern Ontario and eastern Canada. It’s a far cry from reports of tens of thousands of vehicles that have been circulated on social media, but more than enough vehicles to cause traffic headaches in the city.

Getting ready: Police and parliamentary security are bracing for up to 10,000 protesters, CP reports.

The group billing itself as Canada Unity is demanding that the Governor General and Senate combine forces to order the federal and all provincial and territorial governments to lift any remaining COVID-19 restrictions, waive all fines and cancel “illegal” vaccine passports. There is nothing in the Constitution affording the Governor General or the Senate the power to take such action. In a video posted on the group’s Facebook page one supporter said “failure is not an option. Surrender is not an option.”

MPs warned: Sergeant-at-Arms Patrick McDonell cautioned MPs in the national capital region that they could have protests outside their homes, CTV reports. In a memo to MPs, he suggested if that happens they should “go somewhere safe.”

“Avoid physical altercations, even if provoked, close and lock all exterior doors, advise the local authorities… [and] refrain from posting anything related to the demonstration on social media.”

NDP MP Charlie Angus did not take that advice.

Hijacked: The protest convoy has been hijacked by the far right or extreme rhetoric, Mike Millian, president of the Private Motor Truck Council of Canada, told CBC: “We’re seeing signs calling our government communists and Nazis and comparing [the mandate] to the Holocaust. And if you’re comparing this to the Holocaust, you need to educate yourself.”

Protesters have spat on and threatened journalists covering the movement.

Musk onside: Elon Musk tweeted in support of the protesters, the Post reports.

World record? America’s Fox News has an upbeat report on what could be a record-breaking assembly of trucks.

Andrew MacDougall, former director of comms to Stephen Harper, has a column in the Citizen, warning Tories against social-media dopamine hits.

By all means, keep Trudeau busy on big issues such as inflation, for which he has no answer but — for the love of God — keep away from issues where he has the broad support of the public, such as vaccines. Put your dumb-phones down and listen to real people, whether that’s in their homes, at their place of work, or in the aisles of the grocery store. As many as you can. Listen more than you speak. Governing is a deliberative act, not a dopamine pleasure cruise. Playing everything for clicks plunges you deeper into the real-world electoral hole.

Law and order? Globe editorialists write that O’Toole has not done enough to distance his party from the mess descending on the capital.

Diminished: O’Toole is playing for time after a post-election review found fault with the Conservatives’ brand and data game, Global’s Alex Boutilier reports.

The message coming out of O’Toole’s camp on Thursday was an appeal for more time — to address those perceived “brand” issues and to build up a new data game, a costly and risky proposal — and to better acquaint Canadian voters with O’Toole rather than switching horses once again. But there is little doubt, including among O’Toole’s supporters, that the leader has been diminished since last September’s disappointing federal election results.

Free cards? The Star’s Stephanie Levitz reports the party is considering a proposal that membership be made be free.

Diversity: The Globe reports that the party needs to “recruit a wider diversity of candidates and improve its ethnic outreach if it hopes to improve on last year’s results and make gains in Canada’s largest cities.”

Freeland popular: Speaking of leadership politics, a Nanos poll in the Globe finds that “25 per cent of respondents said [Chrystia] Freeland is best suited to lead the Liberal Party into the next election, compared with 18.4 per cent who said Mr. Trudeau would be their choice.”

Who helped? The RCMP is looking for members of a suspected human smuggling ring who helped smuggle a family from India who froze to death during an attempt to illegally cross into the United States, the Post reports.

Influencers abandoned: James William Awad, organizer of a notorious Sunwing flight to Cancun, plans to sue the airline for refusing to fly his group back to Montreal, CBC reports: “Yes, we saw the videos, there were a few people partying on the plane. But what happened is that [the airlines] decided to put everybody in the same boat.”