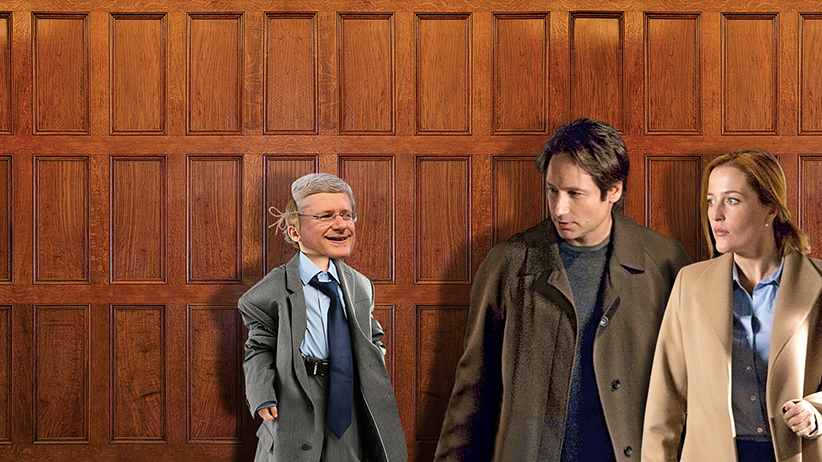 Scully: Enough with the secrecy, Mulder. What are we doing in Canada?

Scully: That’s very sad. But why are we—

Mulder: The Canadian government keeps asking for evidence that he, and others like him, continue to need their wheelchairs—first, every year; now every three years. They basically have to make these veterans prove they still don’t have any legs.

Scully: And so naturally you think . . .

Mulder: This could finally be it, Scully: undeniable evidence of the paranormal or extraterrestrial presence you and I spent four great years, and three other OK ones, searching for. Think about it: human limbs being regrown by unknown forces right under the nose of a national government!

Scully turns up the radio. They eventually pull into a driveway and are welcomed into the veteran’s house.

Scully: We appreciate you taking the time, sir.

Mulder: So let’s get a look at those brand-new legs of yours.

He lunges forward and rips away the blanket from the veteran’s wheelchair.

Veteran: Is this a joke? I no longer have my legs!

Scully replaces the blanket and apologizes. She pauses and turns her head.

Mulder: He was the subject of an X-file from a few years back. Someone phoned in an anonymous tip claiming the Prime Minister of Canada was in fact two eight-year-old boys in a trench coat.

Scully: (shaking her head) God, some people are crazy.

Mulder: That one actually turned out to be true. When you think about it: totally explains the behaviour and the haircut.

Veteran: What do you people want?

Mulder: (opening the file) Just the truth. June 13, 2014: You bought three pairs of socks at the Bay. Care to explain?

Veteran: They were for my wife.

Mulder: Mm-hmm. Feb. 18 of this year: A neighbour swears he saw a man leave your house on two legs, walk confidently to the end of the driveway and pull away in a brown truck.

Mulder: Dammit, Scully—I can’t just ignore my own gut instinct and the vague guidance of various shadowy figures with whom I communicate exclusively in darkened parking garages for some reason!

Veteran: What even makes you think there’s anything suspicious here?

Veteran: Sounds like the real mystery here is why you don’t wear glasses.

Mulder: (ignoring him) I once saw a man get shot point-blank in the head—and, as God is my witness, he just pushed the bullet right out of his brain as though by magic, and went on with his day.

Scully: Mulder, that was in the X-Men movie you watched on the flight.

Veteran: I think you both should leave.

Mulder: If you expect me to buy your story, then you’ve got to answer me this one question: Why on Earth would a national government treat its own veterans with such suspicion and distrust?

Veteran: Beats me. Has it occurred to you that maybe they’re just not very nice people?

Mulder falls silent. Together, the agents leave and walk toward their car.

Mulder: It doesn’t make sense, Scully. I want to believe—but why would any government do this kind of thing to loyal and selfless patriots who’ve already been through so much?