The tumult in Ottawa rages on 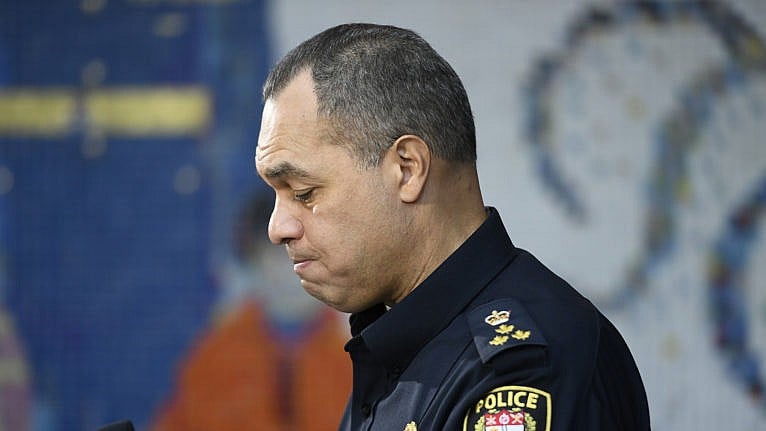 Ottawa Police Chief Peter Sloly has resigned after a highly tumultuous few weeks in his city. Sloly’s handling of the “Freedom Convoy,” which has been allowed to occupy the city’s downtown core sans tickets, tows or more aggressive forms of enforcement, has resulted in withering critiques from politicians and citizens alike.

“Since the onset of this demonstration, I have done everything possible to keep this city safe and put an end to this unprecedented and unforeseeable crisis,” wrote Sloly in a statement posted to Twitter on Monday. “I am confident the Ottawa Police Service is now better positioned to end this occupation.”

News of Sloly’s resignation came on the heels of Justin Trudeau’s invocation of the Emergencies Act, which will give the government unprecedented power to disperse the protestors. Maclean’s published a handy Q&A between Ottawa Bureau Chief Shannon Proudfoot and expert Nomi Claire Lazar unpacking what the government will actually do with power. Lazar had this to say:

“They’re going to use the prohibition of public assembly, they’re going to use the power to limit travel to and from a specified area, they might be designating protected places—so for example the border crossing. They also are empowering the RCMP to enforce bylaws, so instead of having to deputize the RCMP as sort of honourary Ottawa police officers, for example, they can just go ahead and enforce things right on the ground.”

Freeze: The Globe also reported that the act will allow Canadian banks to stem the flow of funds to protestors by freezing the accounts of those who attempt to send them money:

Banks will temporarily be allowed to freeze personal and business accounts suspected of being used to further the blockades without obtaining a court order, and without fear of being sued for doing so, [Chrystia] Freeland said at a news conference. The measures will also allow police, government agencies and banks to share ‘relevant information.’ That includes a requirement that banks report financial relationships with customers involved in the illegal blockades to the RCMP or the Canadian Security Intelligence Service.”

Shut it down: As Ottawa remains occupied, another trucker protest has dispersed, apparently of its own volition. The international blockade in Coutts, Alta., which has caused significant grief for both sides of the border, dismantled itself voluntarily on Tuesday, according to the RCMP. The Mounties decided to disperse the blockade after they discovered a number of firearms during an early morning raid on Monday.

What’s else is behind the swift exit? Attempts to control the narrative, writes Maclean’s Jason Markusoff.

The Coutts gang’s problem, it appears, was that their small corps included a decent contingent that was armed to the teeth, and that threatened to overshadow all other narratives with a dark one. And hours after of the blockade ended, with group photos and a handshake-and-hugs receiving line with police officers—oh, the narratives police have woven these last few weeks—it emerged that three of those arrested were charged with conspiracy to murder, reinforcing the grimmest of assumptions that some protesters had intentions that had nothing to do with a vaccine mandate for truckers.

“The Russian strategy has always been about divide, right? Sow dissent from within,” Momani said in an interview Monday. The goal, she said, is to feed and foster the narrative – already well on its way in the U.S., but less so in Canada – that western-style democracies are prone to instability, insecurity and social upheaval. They picked up on this idea of culture wars and identity politics being yet another demonstration that democracy doesn’t work. And so it really is part of their strategy.”

Welcome to Canada: The government of Canada will significantly ease restrictions for international travellers. Namely, foreign travellers entering Canada will no longer need to take a PCR test upon arriving, nor will they need to quarantine while awaiting the results of random PCR tests administered upon their landing in the country.

The announcement came just a day after Ontario Premier Doug Ford said his province would be easing many of its current COVID restrictions, including the vaccine passport system and capacity limits for restaurants, cinemas, and the like. He held a no-holds-barred press conference Tuesday where his personal frustration with COVID-19 shone through:

“Everyone’s done with this. Like we are done with it. Let’s start moving on, and cautiously, and, you know, we’ve followed the rules — all of us, like 90 per cent of us — for over two years. The world’s done with it, so let’s just move forward.”

Don’t get your hopes up: In the Globe, health columnist Andre Picard wonders if we really are done with restrictions for good:

In the coming days and weeks, the COVID-19 rules will change markedly, an almost “return to normal” in most jurisdictions. There is a period of tranquillity ahead, especially with spring coming. There is a seasonality to the spread of coronavirus. But, going forward, the real challenge is: What happens when infections shoot up again, or when hospital beds, and more importantly intensive-care beds, start filling up with pandemic patients again?