The two pols on the prairie who kneecapped Erin O'Toole

The federal Tory leader cannot be feeling kindly toward Jason Kenney. And certainly not toward Maxime Bernier. 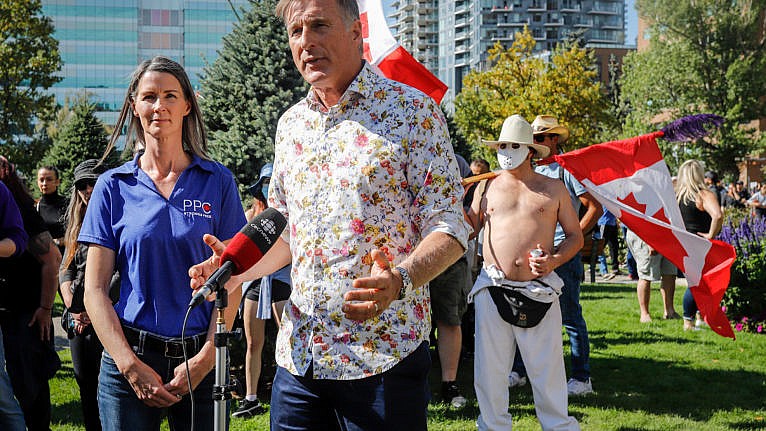 Erin O’Toole must have cast a scornful eye Monday night toward Alberta and Saskatchewan. He was poised to win nearly all of those provinces’ 48 seats, though a few shy of the 47 the Conservatives got last time. The likely cause of his ire? Two former Conservative MP colleagues were out on the prairie, having punched holes in O’Toole’s chance of victory—one unintentionally, one with extreme prejudice.  Jason Kenney was hunkered down at his condo in Calgary, while Maxime Bernier revelling with an indoor, largely maskless throng in Saskatoon.

Those two men cannot stand each other. Kenney privately regards the People’s Party leader as unserious and reckless; Bernier has lately calling the Alberta premier a “despot” for instituting a vaccine passport system. Kenney, of course, supports the federal Conservative leader.

But with the fiasco that was his handling of Alberta’s overwhelming COVID crisis, Kenney painted conservative pandemic management in the worst possible light during the final week of the campaign. With hospital critical care units already near disastrous overload, he finally announced Alberta’s new vaccine mandate for restaurant dining (in place as of Election Day). But that move, improbable as it sounds, positioned the premier to the left of O’Toole, who demurred from endorsing the policy almost every Canadian premier has enacted. Everything Kenney did (or didn’t do) proved a liability to the federal Tories.

Just a year ago, Alberta’s premier had been O’Toole’s most vocal booster. But due to his polarizing tendencies and unpopularity at home, he stayed quiet throughout this campaign, lest he become a convenient whipping post for Trudeau. But when Alberta’s province-wide hospital board was about to plead for other provinces’ hospital workers and ICU beds, Kenney had no choice but to do something. Even if he was doing so on the fifth-last day of the campaign, with the whole of Canada watching. A cautious O’Toole refused to speak to it, despite media repeatedly asking him.

Bernier, meanwhile, marked election night at a hotel near Saskatoon’s airport, more than 3,000 kilometres away from Beauce, the Québec seat he was trying to regain (but would decidedly fail to, losing by 10,000 votes). Part of his reason for being there was that Québec permitted only 25 people at an indoor event; in Saskatchewan, Bernier could party down with a few hundred unmasked and in many cases, presumably, unvaccinated fans in a ballroom. The other reason: there are so many fans of Bernier’s cries of vaccine-rule “tyranny” throughout Alberta and Saskatchewan. It’s the same sentiment that has caused the premiers there, Kenney and Scott Moe, to resist applying public health and vaccination measures: small but hardened and incredibly vocal pockets of opponents.

Bernier spent the entire final weekend of the federal campaign in Alberta. He had repeatedly visited the Prairies throughout the campaign, including the Calgary edition of a Canada-wide series  of anti-vaccine “freedom” rallies. There, to raucous applause, the PPC leader spoke of a “a real freedom revolution in this country, because we know when tyranny becomes law, revolution becomes our duty.” (It’s nearly identical to a phrase adopted by the U.S. anti-immigrant and insurrectionist group “the Three Percenters,” which was added to Canada’s terrorist list in June. The party’s spokesman insisted to CBC that Bernier didn’t know of the link, but he’s kept using it since.)

The People’s Party came nowhere near winning anywhere, but did push past 10 per cent of the vote in some Western and rural Ontario ridings. And in contests dotted throughout the country—tight races settled by far less than five percentage points—those votes helped play spoiler to potential Conservative wins. Places like Cambridge and Niagara Centre in Ontario; South Okanagan-West Kootenay in B.C.; and, potentially, in Alberta’s own Edmonton Centre. In his speech, Bernier treated his surge from five per cent of the Canadian popular vote (from one per cent in 2019) as a victory of sorts, a sign that his movement has a future. In the Calgary speech on the weekend, he tipped his hand that his primary intention is to create a protest movement rather than a constructive political one. “I will be with you in the streets to protest, to fight, fight for freedom,” he said.

What that movement will cling to once the vaccination debate and the pandemic itself (eventually, gosh hopefully) recede isn’t clear. But if Bernier is to tap a rich seam of disgruntlement, it’ll be in the western provinces riven by provincial premiers who are themselves playing a to-and-fro game with populist, defiant politics, only to relent when crap truly hits the fan. This was the region where the soft-separatist Maverick Party was supposed to make a decent showing, while O’Toole had steered the Conservatives toward the whims of Québec and Ontario. That party became a complete afterthought in those rural prairie ridings, Maverick candidates finishing far, far back in contests where the People’s Party finished a distant second.

So here we stand. One Québec-based leader—Trudeau—won the country; another fancies himself the winner of a new, ornery regional base a couple time zones away from his home. Hardline right-wingers in the West will be newly infuriated by that former development, and find an eager megaphone for their fury in the latter one. Disgruntled partisans who put faith in the prospect of victory with a Conservative from Ontario—a leader who softened some of the party’s edges—will be ready to jettison O’Toole, perhaps for someone more Bernieresque. And they’ll likely reflect on Kenney’s contribution to that disappointing result, and be further disillusioned with him. O’Toole and Kenney carefully avoided linking arms at all this campaign. Even so, both could soon find themselves in the political wilderness.