The U.S.-Canada border reopens; and Canadian flags to stay raised 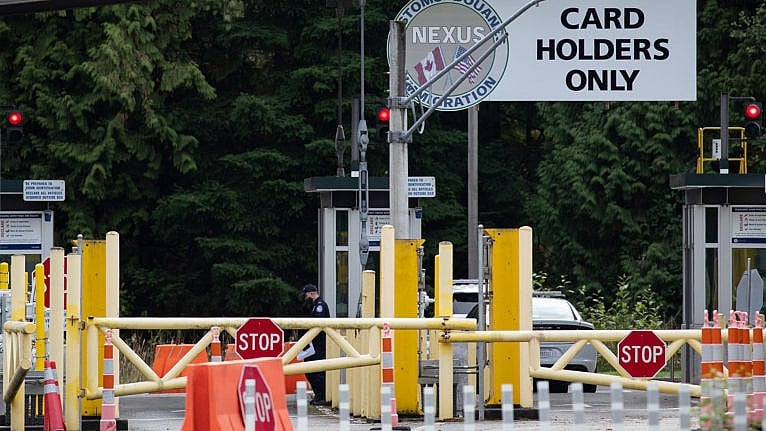 As of midnight, non-essential traffic will resume moving in both directions for the first time since March 2020, when both countries imposed sweeping but selective restrictions in hopes of slowing the spread of the virus — the first widespread border closure since the 9/11 terrorist attacks 20 years ago.

One irritant still remains for travellers: Canada still requires a PCR test, which cost $150-$300 a pop, although Dr. Theresa Tam said Friday “we are looking at that quite carefully.”

Flags up: Canadian flags on government buildings returned to full-mast at sunset on Sunday for the first time since May 30. They will be lowered and raised again to mark both Indigenous Veterans Day today and Remembrance Day on Thursday, after which they will stay at full-mast, CBC reports.

The flags were lowered after the discovery in May of unmarked graves at the former Kamloops Indian Residential School. The government has been in talks with Indigenous leaders about how and when to raise the flags again, with pressure, including from Indigenous veterans, to come up with a solution before Remembrance Day.

The Assembly of First Nations released a proposal earlier Friday that called for the government to attach the orange “Every Child Matters” flag to the Peace Tower in Ottawa and other government buildings starting on Sunday. The government said Friday it would work with the National Centre for Truth and Reconciliation to find a place to fly the NTCR Survivors’ Flag. John Moses, a veteran and member of the Six Nations band, said he had been struck by how quickly the plan for the Canadian flags had developed, but was satisfied with the situation as it stands now. “I think the course of events as most recently described is the most appropriate. I concur with the course of action that has been taken,” he said in an interview Sunday.

Cold cases: Defence Minister Anita Anand tells Global that federal officials may decide that past probes by the military police should be moved to civilians for a second look now that the government is tasking civilians with handling military sexual misconduct cases.

In an interview with The West Block‘s Mercedes Stephenson, Anand said she is studying whether there needs to be an independent military watchdog that reports directly to Parliament, as well as whether any previous military police sexual offence probes should be reviewed by civilian authorities. “These are issues that we are … addressing in the process of implementing this bold move that we are making in terms of transferring cases from one system of justice to another,” she said when asked whether probes such as the one into Adm. Art McDonald should get a second look. “Indeed, there are going to be a number of questions, such as the ones you raised just now, that we will have to take a look at in order to ensure that justice is served,” Anand continued.

NDP-Liberal talks: The Globe reported Friday that the Liberals and NDP are considering a deal “to prop up the minority government for two to three years in exchange for action on housing, pharmacare, climate change, compensation for Indigenous children and other issues,” as first reported by your correspondent in Maclean’s a week ago.

NDP MP Charlie Angus, who wasn’t commenting when asked a week ago, told the Globe that there are talks, but even if they reach a deal, New Democrats will keep holding the government to account.

Mr. Angus stressed that any agreement would not prevent the NDP from holding the Liberal government to account for scandals, spending abuses or failure to deal with pressing issues such as federal compensation for Indigenous children who were removed from their communities and placed into care since 2006. “No matter what, we will still hold them to account. If there is an SNC-Lavalin scandal, that ain’t getting pushed under the rug,” he said.

Liberals to meet: At iPolitics, Kady O’Malley points out a potential governing arrangement will give Liberal MPs something to talk about this morning at their first post-election caucus meeting.

Costly food: Canadians are likely to see inflated food prices at their local grocery stores for several more months, Dalhousie food expert Sylvain Charlebois told CTV on Sunday. Food prices have risen by about five per cent since January, and will likely keep going up, which will mean “several months of rockiness at the grocery store, unfortunately.”

“I think transitory to economists, means sort of not permanent,” said Macklem in an interview with CTV’s Question Period with Evan Solomon, airing Sunday. “I think to a lot of people, transitory means it’s going to be over quickly and maybe I don’t know exactly what the right word is, but it’s probably something like you know, transitory but not short-lived.”

Miller puzzled: Marc Miller wants to find out what role Ottawa played in a ruling releasing the Catholic Church from its settlement obligations to residential school survivors, CP reports. “I am as puzzled as everyone,” Miller said. “I don’t know what there is to do yet.”

The ruling, handed down by a Saskatchewan judge in July 2015, found a deal had been struck between the federal government and a corporation of Catholic entities. That deal released the church groups from their remaining obligations within the $79-million worth of payments and in-kind services owed to survivors under the Indian Residential School Settlement Agreement, approved in 2006.

Who needs jabbing: In Maclean’s, Patricia Treble takes a close look at which areas of the country are slower to get vaccinated, and discovers that reaching unjabbed rural residents is one of the last key steps toward a pre-COVID normal.

Generally, vaccination levels fall as one travels west from Atlantic Canada. So while 86 per cent of the entire population in Newfoundland and Labrador has received at least one dose, that share falls to 81 per cent in New Brunswick, then to 77 per cent in Ontario and then to 72 and 73 per cent in Saskatchewan and Alberta, respectively, before rebounding to 79 per cent in British Columbia. Within provinces, there are even sharper disparities. In Alberta, which breaks rates down by local geographic areas, 92 per cent of eligible residents in the Sherwood Park area outside Edmonton have gotten at least one dose, compared to 64 per cent in St. Paul, just 175 km away.  By contrast, the 34 public-health units of Ontario have relatively similar vaccination rates.

No reset? In the Star, Tonda MacCharles takes a long look at Canada’s China policy, which official Ottawa says, is not due for a reset.

Specifically, officials downplay any talk of a formal “reset” even as the government faces immediate challenges like the decision on whether to ban Huawei from Canada’s 5G networks, which Prime Minister Justin Trudeau has said is due soon, or how to respond to China’s request to join the comprehensive free trade agreement reached among Trans-Pacific allies that currently excludes China. Behind the scenes, senior government officials, who spoke to the Star on condition they not be identified, say reset is a loaded diplomatic term that Trudeau’s government does not embrace, in part because it implies that there hasn’t already been a shift in the relationship.

Whither Joly? Also in the Star, Robin Sears tries to guess why Trudeau made Melanie Joly the foreign affairs minister.

A typical Ottawa insider explanation when a very junior minister gets the top international job — this is far from the first time — is that the PMO will run global affairs and the PM will be his own foreign minister. To some extent this is always true, so that seems unlikely to be the reason. Others point to her increasing leadership ambitions and credit fellow aspirant Chrystia Freeland engineering to have Joly be handed a poisoned political chalice, one that will keep her well out of the country.

ICYMI: In Maclean’s, Jason Markusoff tries to figure out what Shelly Glover is up to in Manitoba.

The enormity of what she alleges, atop the wisps of evidence provided thus far, casts her version of events into doubt. To think what she is arguing is true, you’d have to believe that poohbahs in the party that’s ruled Manitoba for 16 of the last 33 years schemed to rig the selection of an instant premier, brazenly overruling the will of their members. And that they did so ham-handedly, in a way that was readily visible to the side that was having the election stolen from it.

Voting in Montreal: In Montreal this morning, either Valérie Plante or Denis Coderre will be celebrating having won the mayoral election last night. La Presse will have results.