Rachel Notley and the upside down world of Alberta politics

The NDP Premier plans to buy trains to ship oil. Her conservative rival wants mandated cuts to oil production. It's an unnerving time to be Albertan. 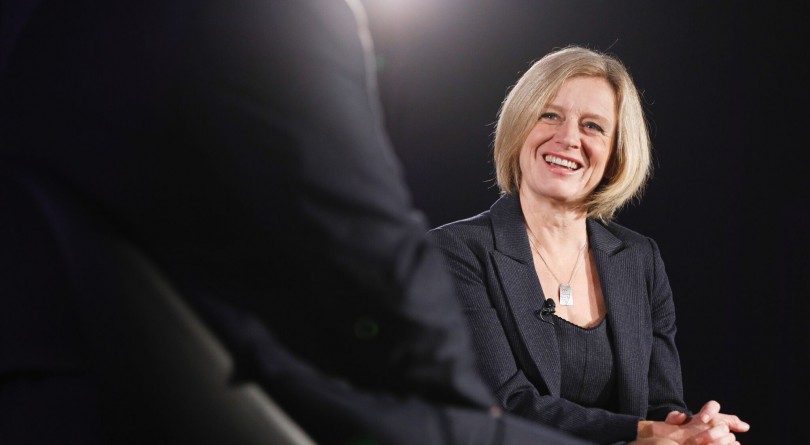 It was one of those “what a time to be alive” days in politics out West.

Five years after the Lac-Megantic disaster, a New Democrat Alberta premier vowed to purchase massive trains designed to ship oil—and while bitumen isn’t that much of an explosion risk, it has around triple the carbon footprint of piping oil the normal way. And one of Stephen Harper’s most ideologically hardline cabinet ministers has opined that Alberta should order all companies to move in lockstep to cut back oil extraction.

But it is indeed an unnerving time to be in Alberta, when one’s as likely to hear the cliché about desperate times and desperate measures around downtown Calgary as one is to hear anguished sighs or yelps.

Prices for Alberta oil have plunged with a ferocity not seen since the 2014-2015 global price collapse, and once again just as major companies chart their 2019 spending plans. With it have come fears that widespread layoffs will return as well, in a province still clawing its way out of the crater left by the last recession. Blame for the current flash-bargain prices gets pinned on the lack of pipelines to transport all the oil Alberta is producing, a long-in-the-making result of judicial ruling (Trans Mountain expansion), political decision (Northern Gateway), regulatory and economic murk (Energy East) and exotic stews of factors (Keystone XL).

It’s all left the industrial leaders and workers in this classically pro-free-market province begging for a government-led solution to a government-caused solution.

When Prime Minister Justin Trudeau and Finance Minister Bill Morneau each flew to Calgary for speeches in the last week, both were greeted by large groups of demonstrators, whose signs were making demands for Ottawa to make good on the massive intervention it’s already made—the Trans Mountain expansion pipeline the government acquired this summer.

Even if Ottawa breezes through the judicially ordered Indigenous consultations in British Columbia and renews the pipeline’s approval next year, it still won’t be complete until early next decade, so it merely helps Alberta’s oil supply glut in the long term. Rather than sweat it out until then, some companies are already slashing their own oil production to wait until better prices return, or pursuing deals to ship more bitumen by train (known as pipelines on wheels, with far fewer regulatory and approval hoops to leap through).

In a Maclean’s Live interview Wednesday with senior writer Paul Wells—he dubbed her a new “railway baron”—Notley said she’d much rather talk about pipeline economics than rail economics, as oil by rail is far costlier along with being the more pollution-intensive way to move fossil fuels. But, she added it’s better than discussing the current economics of distressed oil prices, with the price for much of Alberta’s bitumen flirting with a US$40 and even US$50-per-barrel discount to the benchmark Texas crude.

A less controversial pipeline expansion, Enbridge’s Line 3, is slated to ease the bottleneck slightly and briefly when it opens late next year. Notley’s plan to buy new trains—she’s asking Ottawa to share the cost, but has gotten little uptake thus far—would bring further relief to the supply glut in late 2019, as well. “This is still not a solution between now and next year,” the premier told Maclean’s Live.

That’s where Kenney’s new bit of economic command-and-control advocacy comes in. The most viable short-term fix for the price glut being bandied around Calgary is a government-mandated curtailment of oil production across the whole industry. Scotiabank economists estimate that a sector-wide, four-per-cent cut to all oil sands and conventional crude production could slash the discount on Alberta’s heavy oil from $40 per barrel to $20 per barrel.

Several companies, mostly those which have already been paring back their output, have also demanded Notley take mandate shutting in production—but a number of firms that have their own refineries to help manage their own oil flows, like Suncor and Husky Energy, have argued against the drastic step.

Kenney, so often quick to decry the heavy-handed meddling ways of Liberals and NDP, came out Wednesday in favour of Alberta’s biggest market meddling in a generation: a 10 per cent cutback in Alberta’s oil production, to end the “fire sale” on bitumen. “Now only governments can stop the current giveaway of Alberta oil which could result in huge job layoffs and billions of dollars in lost revenues,” said the former Canadian Taxpayer Federation gadfly now vying to oust the socialist hordes in next year’s provincial election.

A decade ago, when former Tory premier Ed Stelmach adjusted provincial oil royalties, energy watchers likened him to Venezuelan strongman Hugo Chavez. On Wednesday, most of what Kenney’s chavismo moment garnered was uneasy nods. He also gets credit for showing a pragmatic streak, though this is a somewhat convenient stance for him to make now, since by the time summer comes around and Kenney is potentially premier, the need for such a move will likely have passed.

Notley hasn’t yet decided where she stands on dictating that oil companies leave product in the ground, but has suggested a decision is coming soon. The complex logistics of ordering the many companies in Alberta’s oil patch to all gear down simultaneously, laid out here by University of Alberta’s Andrew Leach, may tilt the province toward seeking other solutions. The fact that her right-wing rival has agreed with the heavy-handed measure gives her ample political cover to do so, which an NDP premier might not have otherwise. If she does so, she risks looking like she’s following the lead of her opponent. But then again, there’s the whole matter of Alberta’s economic viability she’ll also have to weigh.

Earlier this year, Notley tried to out-Kenney Kenney by slapping a ban on B.C. wine when that province’s NDP government wanted to restrict bitumen transmission. Now, Kenney has out-Notleyed his NDP foe by wanting to centralize management of the oil industry. Strange times, yes, but also pre-election times, when politicians want to prove themselves canny problem-solvers. And if any dollop of strangeness can ward off a return to gloomy times for Alberta—so soon after the last batch—residents will likely be forgiving.