The Wynne government flies blindly into the housing bubble

Ontario sat idle while foreign buyers flocked to Toronto. With no reliable data, who knows what the province's new tax will do? 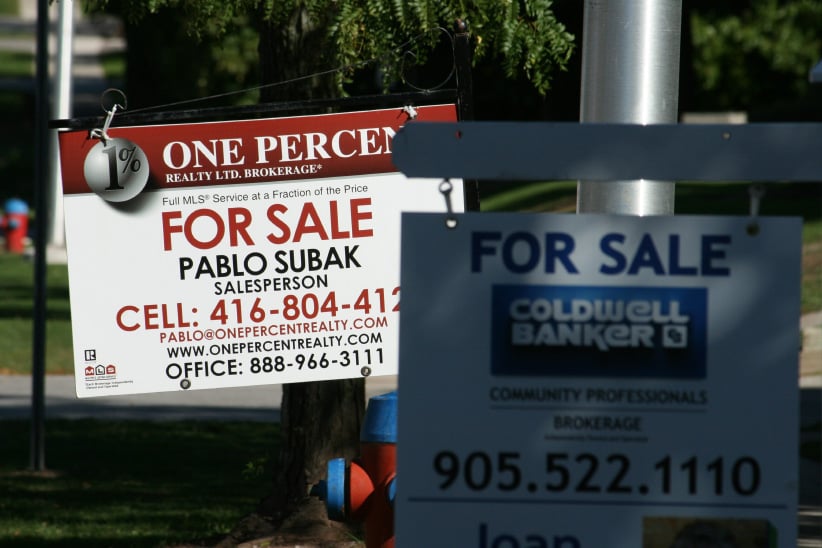 The real estate frenzy has struck across southern Ontario, including this street in Oakville (Richard Buchan/CP)

The Ontario government introduced a package of 16 measures Thursday designed to tame runaway home prices in Toronto and surrounding cities, and improve affordability for those hoping to own or rent property. Premier Kathleen Wynne confidently declared the plan would bring stability to the market. “It’s about helping people buy a home, afford to rent a home or to stay in the rental home they’re in,” she said. “My objective is to make sure that what we do helps people.” As for the underlying data guiding these policy decisions? About that, the government is less confident.

The Ontario Fair Housing Plan includes options to boost housing supply, prevent egregious rent increases and rein in excessive speculation. But it’s hard to shake the feeling the government is, in several important ways, flying blind. The lack of data surrounding Canada’s housing market has been a problem for years, and it’s only grown more pressing as real estate markets in B.C. and Ontario have turned red hot. In the federal Liberal’s first budget in 2016, the government allotted a measly $500,000 to Statistics Canada to monitor foreign investment in real estate. This year, the government announced a much bigger investment geared toward collecting housing data—$300 million over the next decade, including $39.9 million to study foreign ownership. Though welcome, such investment should have come long before prices in Vancouver and Toronto flew into the stratosphere. Without reliable numbers, policymakers are left making decisions in the dark—and far too late.

Take the 15 per cent “non-resident speculation tax” the Ontario government announced on Thursday. The levy, effective immediately, targets foreign buyers who are flipping properties or using real estate to park cash. But the government doesn’t know how big a factor offshore buyers are. At a news conference, a reporter pressed Sousa to account for the number of foreign and domestic speculators in the market, compared to families who are simply trying to find a place to live. “The data is very clear,” Sousa said before sidestepping the question. “Prices are going too high, and demand is extremely high.” Eventually, he conceded: “We have to get greater clarity.”

When Vancouver implemented a foreign buyer tax last summer, many observers and economists predicted investment would flow to Toronto. Rather than try to get a handle on the issue, Ontario policymakers sat idly by. Wynne maintained a similar tax wasn’t the right fit for the province. “I’m not interested in doing something that would have an unintended consequence in Ontario,” she said in October.

The government is only now pledging to collect more data on homebuyers. Effective April 24, purchasers will have to declare residency, citizenship and permanent resident status, and whether the home will be occupied by the purchaser or family members as a primary residence. One of the outcomes of the much ballyhooed housing summit earlier this week between Sousa, his federal counterpart Bill Morneau and Toronto mayor John Tory was a commitment to “sharing relevant data more regularly between governments to enhance understanding,” a move that seems comically late after prices in the region have surged double-digits over the past few months.

Sousa’s targeting of “property scalpers” is equally devoid of hard facts. The finance minister has asserted that speculators are flipping contracts to purchase pre-construction housing units before closing, a practice he argues is contributing to price increases and crowding out families. Assignment sales, the more benign name for the transaction Sousa is talking about, have occurred in the condo market for years. But the government did not provide any information on the prevalence or frequency of the practice. Instead, the province pledged to “work to understand” the issue. The move to preemptively brand “property scalpers” a problem, however, smacks of an effort to create a villain that the government can then vanquish—a useful tactic for a government headed by a leader with a record-low approval rating facing an election next year.

None of this is to say that the package announced today is not needed. It would simply be reassuring for the public to know that policymakers are guided by research and firm data, instead of reacting to frothiness in a real estate market that’s been foaming for years. The housing market is far too important to the economy for that.

“The household sector has been pretty much the only game in town when it comes to driving broad Canadian GDP growth,” wrote Scotiabank economist Derek Holt in an unsettling note this week. The real estate market heavily influences consumer spending—when markets boom, homeowners feel wealthier, and spend more money. Holt calculates that housing and consumption amounted to 84 per cent of annual growth in real GDP from 2010 to 2016. Governments, he says, need to be “very careful in not removing what has essentially been the only source of growth in the economy for years now and doing so a) potentially at the peak of the cycle, and b) with cavalier attitudes to the importance of facts and figures.”

The good news is that the measures announced today are unlikely to send the market into a tailspin. If anything, the package might be too tepid. “The bark is bigger than the bite,” wrote Bank of Montreal senior economist Robert Kavcic this morning. Benjamin Tal, an economist at CIBC, wrote most of the policies are “reasonable and potentially helpful.” The foreign buyer tax and a crackdown on assignment sales would both have only a marginal impact on the market. “But margins do add up,” Tal wrote.

No one can say for certain how effective the new policies will be, of course. When it comes to the housing market, the future is just as cloudy as the past.