There's no hiding the personal toll of an election campaign

Election Image of the Day: Elizabeth May telling her husband she won't be home on Thanksgiving Sunday reminds us that party leaders are people, too 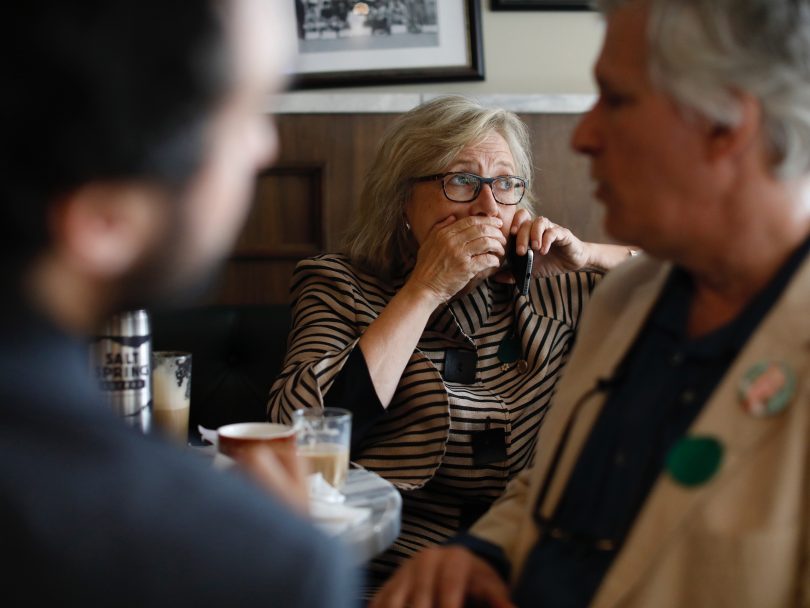 Elizabeth May in Montreal on the phone with her husband. (Photograph by Blair Gable)

God created the world in six days, and on the seventh took a day to rest. Elizabeth May hasn’t accomplished anything so mighty as world-building, but neither has she gotten a day off during this election cycle. She apparently hoped to set aside each Sunday to spend time with her new husband, fellow Green Party candidate John Kidder, who’s running in the B.C. riding of Mission—Matsqui—Fraser Canyon. Their wedding, this past Earth Day, was the stuff of earth-mother fairy tales, full of floral crowns and inflatable orca puppets. But the life of a federal party leader doesn’t jive well with the magic of newlyweds. May, in the photo above, is breaking the news that she’ll have to spend yet another Sunday away from home—in this case, the one on Thanksgiving weekend. Her plan is to fly home late Sunday night, after cramming in as many East Coast stops as possible, then hit the trail again for the final week of the campaign. Figuring out how to make such a manoeuvre carbon-neutral wasn’t easy—but neither was her decision to spend less time with her family.