There's no ignoring Maxime Bernier, the X-factor of this election

Election Image of the Day: Campaigning in hostile territory is no problem when you're not expecting to win any seats 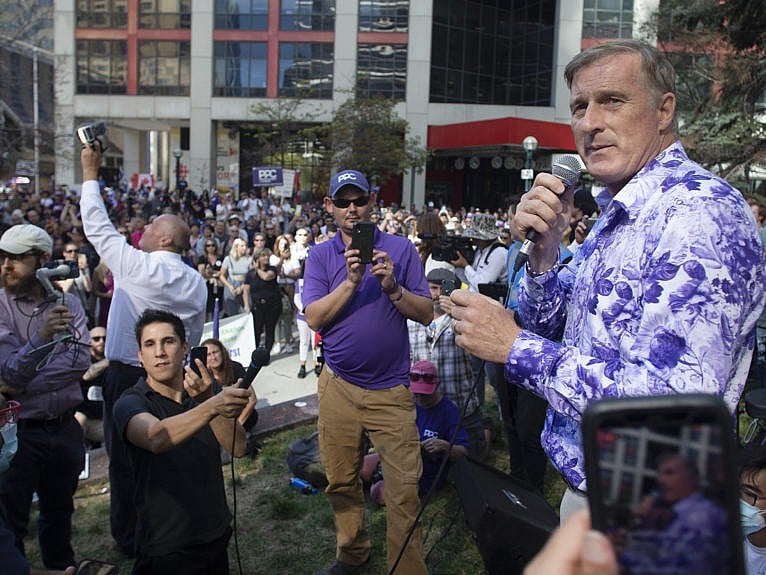 Maxime Bernier, Leader of the Peoples Party of Canada (PPC) speaks at a rally in Toronto. (Chris Young/CP)

What’s Maxime Bernier doing, days before an election, hosting a rally for hundreds of people in downtown Toronto—in front of the CBC building, no less? Traditionally, in the waning days of a campaign, you want to put your resources in seats you have a chance of winning. And that’s the kicker: with his People’s Party of Canada, which looked like a failed amateur experiment until it successfully glommed onto the anti-lockdown crowd, Bernier does not seem interested in winning seats. Heck, that might not even be their goal. The PPC is, instead, all about generating chaos. His party wins over voters by promising to end lockdowns, scrap supply management and overhaul free-speech laws. For good or ill, they have given a political voice to the large, disjointed medley of angry Canadians who reject conventional politicians, resent mask mandates and distrust vaccines. Add one part disaffected Conservatives, who roll their eyes at Erin O’Toole’s flip-flopping on the economy and climate change; toss in one part protest vote, mostly sapped from disengaged Greens; and throw in a dash of Trump-style populism, drumming up votes from folks who’d never vote otherwise. The result of this recipe is a true maverick party (sorry, Maverick Party) that could well spoil this election in favour of the Liberals. No, the PPC is unlikely to win a single seat. But Bernier broke off from the Conservatives with a different goal: revenge. Years later, it’s hard to argue he’s failed.