In March, journalists, dignitaries and the Prime Minister gathered on the chilly tarmac at Toronto’s Pearson airport to welcome two special envoys as they ended their 18-hour flight from Chengdu: giant pandas Er Shun and Da Mao. Sent to Canada under an agreement with the Chinese, the pair will live at the Toronto Zoo for five years, then move on to Calgary. When they were unveiled in May, pandemonium broke out: zoo staff reports that the pandas (and plush panda merchandise) have been a huge draw.

On June 15, Iranian voters picked the successor to their volatile two-term president, Mahmoud Ahmadinejad. A relative moderate, Hassan Rouhani has seemed intent on reaching out to the West to end the diplomatic impasse centring on Iran’s nuclear program. He’s willing to negotiate aspects of it—so long as the international community recognizes Iran’s right to enrich uranium. “For us there are red lines that cannot be crossed,” he has said. Critics say he represents more of the same. Still, in November, the United Nations nuclear watchdog found that Iran had stopped the expansion of certain nuclear activities under Rouhani—intended as a gesture, perhaps, to the West.

On May 10, New York pastry chef Dominique Ansel unveiled the cronut—a croissant-doughnut hybrid, sugar-dusted and filled with cream—and soon rabid fans were lining up for hours to nab one. (Ansel cracked down on “cronut scalpers,” who’d resell his pastries for as much as $100 apiece.) He obtained a trademark, but imitators nonetheless rushed in—including, most ignominiously, the cronut burger, which debuted in August at the Canadian National Exhibition, an event famous for extreme foods like the deep-fried Oreo and the eclair hot dog. An ersatz cronut sliced in two sandwiching a beef patty, it quickly attracted crowds of its own. They dispersed after at least 150 people came down with food poisoning. (The squiggle of “maple bacon jam” was the culprit.) Ansel continues to sell small batches of his cronuts for $5 apiece. As for the cronut burger’s creators, he sniffed: “We hope they spend less time rushing to rip off another chef’s product in bad faith, and more time on developing their own.”

All students of chemistry learn the periodic table of elements, and soon they’ll have to memorize a new one: element 115, called “ununpentium,” although it has yet to be officially named. Scientists have spent years looking for ununpentium, one of the heaviest elements ever observed. A team from Lund University in Sweden confirmed its presence by bombarding a film of another heavy element with calcium ions, then tracking what was left behind after it decayed, a mere split-second later. Ununpentium is very rare—it might wink in and out of existence in a supernova—although it’s been a fixture in video games. Lara Croft collects a chunk of element 115 in Tomb Raider III. 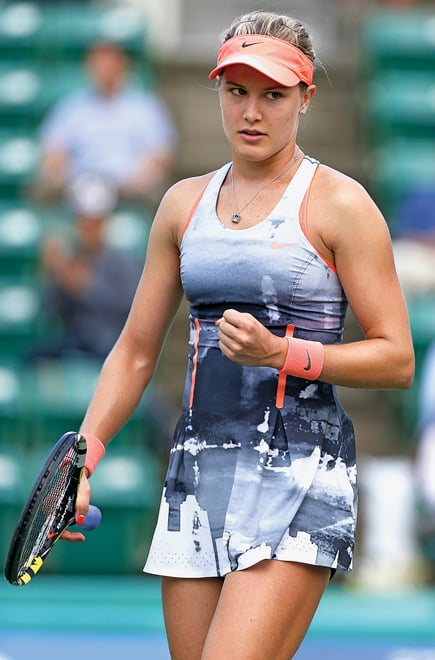 Tapped by Barack Obama to replace Ben Bernanke, who finishes his term as head of the U.S. Federal Reserve in January, Janet Yellen is set to become the first woman to head a major central bank. Boosting employment is at the top of her agenda. “Too many Americans still can’t find a job and worry about how they’ll pay their bills,” said Yellen, 67, who’s been vice-chair of the Federal Reserve since 2010, during her White House nomination. President Obama, who has praised her consensus-building, sees her as providing a sense of continuity post-Bernanke.

One short year ago, Montreal tennis player Eugenie Bouchard (who goes by “Genie”) was a relative unknown. Now, the 19-year-old is capping off 2013 as one of the most-watched stars in her sport—and Canada’s newest tennis darling. Bouchard bested Ana Ivanovic, a Serbian player ranked 16th in the world, at Wimbledon in July. The match was played on centre court, in front of Carole and Michael Middleton. “You can’t play on a bigger stage than that in tennis,” she said. She may find herself doing some encores.

It was a scenario straight out of a Hollywood blockbuster: on Feb. 15, a 20-metre-wide rock from space burst apart above the Russian city of Chelyabinsk, the energy equivalent of 500 kilotonnes of TNT. The shockwave knocked people off their feet, broke windows and roofs, and injured more than 1,200 people—while the blazing fireball gave onlookers skin and retinal burns. An incident like this occurs only once in a century, according to NASA, and this was the biggest meteor event since the the famous Tunguska Impact of 1908, when a meteorite exploded over remote Siberia with devastating consequences. Called “the vermin of the skies,” asteroids are constantly swarming around our planet; Chelyabinsk was a dramatic reminder that we need to keep our eyes peeled for the next oncomer.

In January, the MPP for Toronto’s Don Valley West riding became the new leader of the Ontario Liberal Party—and the first openly gay premier in the country. Wynne, who’d been viewed as a dry policy wonk, faced stiff competition from Sandra Pupatello, endorsed by the Toronto Star and the Globe and Mail. But she began connecting with her audiences as time wore on. Unfortunately for her, she inherited a full-blown scandal over the pricey cancellation of gas plants.

In 2013, big-box retailer Target plastered its trademark red-and-white bullseye across Canada, opening 124 stores in its first expansion outside the U.S. Rivals like Canadian Tire and Sears had reason to be concerned—yet in October, Target execs admitted their Canadian conquest didn’t go as planned. Sales here “have fallen well short of expectations,” CEO Gregg Steinhafel said at an investors’ event, maybe because Canadians, unlike Americans, have yet to embrace “one-stop shopping.” Undeterred, Target execs say Canada will be a huge area for growth over the next few years: go big, or go home.

When Royals, the song by 16-year-old Ella Yelich-O’Connor—better known by her stage name, Lorde—climbed to the No. 1 spot on the Billboard Hot 100, she became the youngest singer to top the charts in 26 years (since Tiffany). “It feels like a combination of my birthday, Christmas and washing my hair after a month of not doing so,” the New Zealander told Billboard. Hailed as the “coolest teenager ever,” and an antidote to super-produced acts like Miley Cyrus and Katy Perry (Lorde turned down the chance to tour with Perry), she’s earning a reputation for her smarts and spirit, and for her dreamy voice. This was her breakout year, but Lorde’s just going to keep getting bigger: she’s on the soundtrack for The Hunger Games: Catching Fire with Coldplay and Patti Smith.

A monstrous deep-ocean creature that inhabits our myths and legends, the kraken has rarely been seen. In 2013, for the first time, we got a good look at the giant squid. A team of scientists, using an ingenious camera system, filmed the 10-m-long animal in the deep ocean off the coast of Japan. The giant squid, with its parrot beak and eyes the size of dinner plates, was drawn toward the camera by a brightly lit lure called the “electronic jellyfish,” designed by marine biologist Edith Widder. Footage shows it swooping up through the dark, long arms snaking dramatically around its prey. “We’ve got something the size of a two- to four-storey house in the deep ocean that we’ve never seen,” Widder told CBS. “Until now.” It’s been said we’ve mapped the moon and Mars more thoroughly than the deep ocean, so this raises the question—what else is down there?