Think your election choice is tough? Try being a Newfoundlander

With debt piling up and the economy in shambles, the parties seem unable to distinguish themselves for Thursday's election. No wonder it's too close to call. 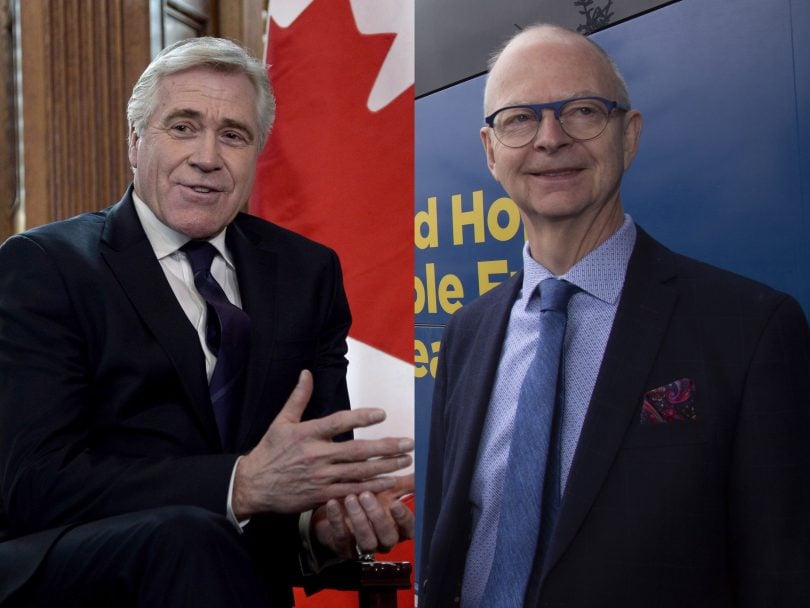 The mood of many Newfoundlanders and their upcoming provincial election is captured almost perfectly over coffee inside a Tim Hortons in the rural town of Holyrood.

It’s less than 24 hours until the polls open, with the governing Liberal Party and Conservatives neck and neck in the polls. Kimberley Murray sits for breakfast with her husband, both of them wearing hoodies branded “East Coast Lifestyle,” in a battleground riding where the outcome could propel either party to office.

When asked about the election, she says: “I think I could just close my eyes and vote for either one.” She laughs, but not for long, adding: “It’s sad.”

Such are politics in Newfoundland and Labrador, a province trapped in economic crisis, where the number of undecided voters remains stubbornly high, and where neither of the two main parties seems able to differentiate itself from the other, but for the colour of its signs.

“The story since 2015 has been large deficits and a province in very difficult financial circumstances,” says Russell Williams, a political science professor at Memorial University. “But as a result, neither the Liberals who came to office in 2015, nor the Conservatives who hope to get back in office in 2019, seem to have a lot of differences. It’s not clear to me what either party’s plan is.”

RELATED: Newfoundland has a problem: no one wants to be a politician

Both now bear some blame for the state of the province’s finances. The last time the Conservatives were in power, from 2003-2015, Newfoundland rose to “have” status on the strength of soaring oil prices—only to tumble back to “have-not” when the oil markets crashed. That hard news was coupled with the discovery that Muskrat Falls, a large provincially-funded hydroelectric mega-project in Labrador, had gone massively over budget.

As the Tories tried to implement austerity measures, they were voted out in 2015. The Liberals won 31 of the provinces 40 seats with the optimistic promise they could get the province’s finances in order without cutting public sector jobs or raising the HST. But upon getting elected, and faced with economic reality, the newly elected Liberal Premier Dwight Ball not only demurred from reversing a two per cent increase to the HST, as he’d promised, but oversaw a gas tax increase and the introduction of a highly unpopular “deficit reduction levy” on anyone earning more than $50,000 a year. His government also cut hundreds of public service jobs.

“I think the electorate understands that the Liberals inherited a really bad situation and that Muskrat Falls was a disaster,” says Williams. “Normally, we’d expect them to be in pretty good shape going into this election; they’ve only been in office four years.  The problem for the Liberals is they have come to own a lot of those problems handed to them.”

That, says Williams, is because they haven’t governed much differently than the Tories in terms of spending. The Liberals’ annual budget expenditure over last the four years is nearly identical, year-over-year, to what the Conservatives projected in their 2015 budget.

“I can’t say this enough to people, although generally people are not talking about this election,” Williams adds. “We are in desperate financial straits and our deficit next year is projected to go up to $800 million, which is a lot in Newfoundland. And there’s no plan to address that.”

RELATED: Bust times are back in Newfoundland and Labrador

Newfoundland has the highest per capita debt in the province’s history—about $28,000 for each of the provinces 525,000 residents—and that’s only expected to rise. It has the country’s oldest population: last Canada Day, half of its inhabitants were older than 46, as many younger Newfoundlanders continue to leave for better work opportunities in other parts of the country. The aging population’s rising demand for services has put a strain on Newfoundland’s health care; so too has the limited number of working-aged people and economic activity needed to fund it. Last year, Newfoundland was the only province in Canada with a contracting GDP; it fell 2.7 per cent.

Without any plans to increase revenue, the alternative is to introduce massive austerity measures and rein in spending, but it’s not easy getting elected by telling folks Nanna and Poppa won’t be getting the same kind of health care as other provinces because of budget problems.

“Just before the writ was dropped, our leader [Ches Crosbie] made the comment that we were going to try and find efficiencies in health care,” says Robert Lundrigan, campaign manager for the Conservatives. “Our opposition, falsely, characterized that as us wanting to cut health care. That’s continued to dog us throughout the campaign.”

Is there at least a belief things will be better soon? Not if the polls are any indicator. A majority of Newfoundlanders feel the province is headed in the wrong direction, one recent Abacus Data survey suggests. Even among those who intend to vote Liberal, 27 per cent said they felt that way.

“I get the sense from the survey that they look at their political leaders and not many people are that inspired that they’ll offer hope or solutions in the province to turn the corner,” says David Coletto, CEO of Abacus. “That’s how people are feeling about this election: many will make a choice, but for many they’re not inspiring choices, be it the party or the individual leaders.”

RELATED: The case of the vanishing female premiers

As for a viable third party, the NDP failed to prove its preparedness when the Liberals a month ago called this election, which was once slated to take place in the fall. At the time, NDP leader Alison Coffin said: “We’re as ready as we can be.” Yet the party’s hunt for viable candidates before the deadline ended with only 14 people running in the province’s 40 ridings. (The Conservatives are also short, but only by one candidate.)

Though the NDP was recently poised to become Official Opposition, Williams notes that it has been plagued over the past five years by infighting and organizational problems that left it unready to campaign when the writ unexpectedly dropped.

And that’s added another variable not seen in previous Newfoundland elections: “Do NDP voters stay home, or do they plug their nose and vote for one of the other parties?” asks Stephen Moore, vice-president of the polling company MQO Research. “That will have an impact in such a tight race.”

Back in Holyrood, Kimberley Murray’s husband, Gerard—a union man who works in construction—voted Liberal like his wife did four years ago, but says he’ll be switching his vote to PC on Thursday.

The province needs a change, he says, and that’s what he’s voting for. But he’ll concede he’s not quite sure, exactly, how things will change after this election—if they change at all.

MORE ABOUT NEWFOUNDLAND AND LABRADOR: