This pandemic is far too important to be left to Ottawa

Jen Gerson: We can't wish away the Constitution. But we can stop filling our provincial legislatures with over-ambitious dimwits. 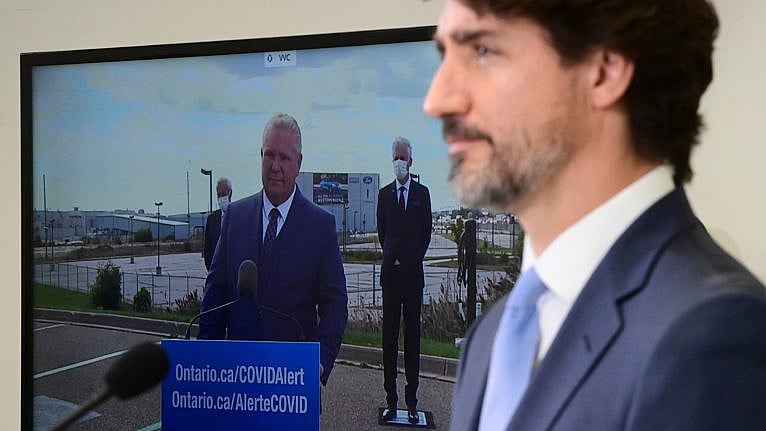 Prime Minister Justin Trudeau at a press conference in Ottawa in October. He was joined virtually by Ontario Premier Doug Ford. (Sean Kilpatrick/CP)

The news-cycle being what it is of late, by the time you are reading this column, it is possible that you will have forgotten the moment in April when the COVID-19 situation seemed so dire in Ontario that federal NDP Leader Jagmeet Singh implored the federal government to invoke the Emergencies Act and take control of that province’s response to the pandemic.

The call did not gain traction, firstly because the federal government was no better equipped to coordinate a provincial response to a health crisis than the province itself, and almost certainly significantly less able to do so. And secondly, because the suggestion was delusional—akin to realizing the earth is shaking, then casting about for the adult in the room who can stop the lamps from toppling over.

Whatever trouble Ontario may be in by press time, the federal government is only looking good by a very poor comparison.

It’s been popular to castigate Conservative provincial governments for poor COVID-19 performance and praise the progressive ones, but the comparison doesn’t hold up to much scrutiny. The death tolls of the western provinces have all been within statistical skipping stones of one another on a per capita basis—even in NDP-led British Columbia, lauded early on as a pandemic hero, and now struggling to contain variants of concern. Meanwhile, the clear winners are the Atlantic provinces, which had the foresight—and ability—to combine travel restrictions with strict lockdown measures. These provinces are led by two Liberals and two Conservatives, providing hope that productive cooperation across the aisle is at least theoretically possible.

Further, this framing gives an incredible pass to the federal Liberals, whose laundry list of failures read something like this; they botched early warnings of the emerging threat of the virus, advised against masking, argued against border closures, were unable to establish early basic screening protocols at ports of entry, maintained lax border restrictions, established pandemic Kabuki theatre quarantine hotels that failed to stop variants of concern from entering the country and—despite a virtually limitless budget—were unable to procure early access to enough vaccine to prevent a third wave.

Anyone who can look at that list and think Ottawa ought to be running more of this show has lost the thread.

Look, if this pandemic hasn’t inspired you to a quasi-serious meltdown over the deeply sclerotic state of our national institutions, you’re rather missing out. The federal Liberals have spent several years wrapping themselves in a lot of fine nostalgia for Canada’s glory days. But at the end of the day, Ottawa has revealed itself to be run by a lot of well-intentioned but feckless cheque-writers who have no more grand sense of what this country is, or what it ought to be doing with itself, than anybody else.

There seem to be a growing number of scholarly types who think this is a bad thing; that our evident lack of national capacity to manage not just a crisis, but far more ordinary problems like buying airplanes or running a payroll system, is a very serious problem. I cannot say that this is wrong. A nation that can’t procure a ship, or run a credible website for its revenue agency, can be rightly labelled a barely functional liberal democracy.

My own very radical rebuttal to this pessimism is that maybe Ottawa is exactly where it ought to be: confined to saying pretty things about Canada and wiring the provinces money to run the place.

For most of our country’s history, we’ve enjoyed the luxury of complacency. Thanks to the economic, cultural, and military might of our neighbours to the south, we’ve never had to shoulder the consequences of failure. As long as America skated through its golden age, we could ride in the glorious wake.

COVID-19 is the hidden price of our slacker strategy. This pandemic is forcing us to contend with the consequences of our high-minded inadequacy.

Yet Canada isn’t broken so much as been allowed to wither; our system is fine, as long as we have capable hands to run it. Our failure is not that we are incapable of running a quarantine, enforcing intelligible and sustainable lockdown restrictions, or securing an IT platform to oversee vaccine rollouts; these are all just technical and logistical problems. Our failure is that we elected people who lacked the skills and the foresight to see the problem clearly, and then do what was necessary to manage it.

We need to start acting like the adults in the room that we are. We can no longer treat our parliaments and legislatures as places to park our over-ambitious dimwits. We need smarter people—the types who would normally channel their talents to more profitable and rewarding endeavours—to step up and become politically engaged. Politics is a terrible and awful profession, and one generally avoided by rational and accomplished people in this country, but I’m afraid there is no avoiding it. The call to duty and service is now dire.

There is also no avoiding the nature of the Canadian Constitution, which devolves the most important powers to the provinces. That means a drive for real leadership is going to have to begin there. Maybe if effective people see the provinces doing useful things, more of them will be called to the challenge. The Atlantic provinces have offered us a glimpse of a model of competent provincial leadership working together as a regional bloc in order to define and create solutions to regional problems.

Leave the grandstanding to Ottawa; it’s what matters the least, anyway.