This year has taught us that democracy is not unshakeable 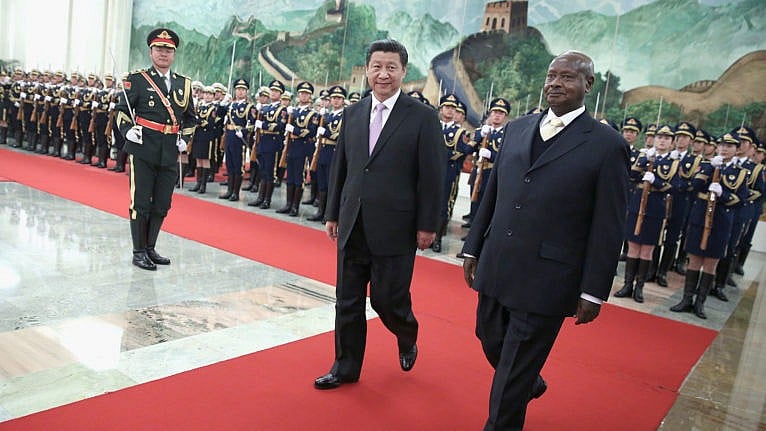 Uganda’s Museveni (right), with China’s Xi Jinping in 2015, has been in power for 34 years (Feng Li/Getty Images)

It’s not easy to run for the presidency of your country when you find yourself facing charges of treason only days after declaring your candidacy, and then the attorney general accuses you of plotting to disrupt the electoral process, and then you get arrested and detained by police for two months for merely meeting with supporters.

But that’s what Uganda’s Henry Tumukunde has been up against since March, when the retired brigadier general formally declared that he intended to challenge Ugandan President Yoweri Museveni in January’s elections. It hasn’t mattered that Tumukunde served in Museveni’s cabinet, or that he’d earlier made peace with Museveni after being arrested and spending nine years in military confinement for suggesting it was maybe time for Museveni to retire.

That was back in 2005, when Museveni’s party managed to abolish the constitution’s two-term limit on the presidency. In 2017, the age limit was also abolished and presidential terms were extended from five years to seven. Museveni has been in power for 34 years. He is 76.

Following the American-led triumph of free-market globalization after the dark and bloody years of the Cold War, Museveni emerged as a leading figure in the generation of African leaders that U.S. president Bill Clinton praised in 1998 as the leading edge of liberal democracy’s unstoppable march across the continent. As things have turned out, there was nothing unstoppable about it at all.

Tumukunde is one of several candidates vying for the Ugandan presidency, and he’s placed his hope in Museveni failing to win the first round in January and the opposition uniting around a single challenger, eventually coming out on top. “If we can work together, this will increase the opportunity of one of us winning,” Tumukunde told me.

Around the world, by 2020, democracy was in its 15th year of retreat. Charismatic, Western-backed leaders who found their way to power through the ballot box were welcomed into the arms of the World Bank and the International Monetary Fund, but they’ve turned out to be just as reluctant to surrender power as the hard men at the vanguard of Third World liberation movements were.

The abolition of term limits is becoming a reliable signpost in democracy’s descent into “illiberal democracy,” and then to despotism, civil war and chaos. Over the past five years, they’ve been weakened or entirely abolished in Algeria, Burundi, Chad, Comoros, Côte d’Ivoire, the Democratic Republic of the Congo, the Republic of the Congo, Egypt, Guinea, Rwanda and South Sudan.

This is not just an African phenomenon or a right-wing or left-wing phenomenon. The abolition of term limits and other methods of subversion from above have been successfully employed by Nicaragua’s Daniel Ortega, Venezuela’s Nicolás Maduro, Turkey’s Recep Tayyip Erdoğan, the Belarusian dictator Alexander Lukashenko and, most effectively, by Russia’s Vladimir Putin.

A former KGB officer, Putin was appointed prime minister in 1999 and elected president in 2000. He dodged term limits by shifting back into the prime minister’s office in 2009, and then won a dubious re-election as president in 2012 in a vote that fewer than half of Russian voters considered free and fair. In July, Putin secured a constitutional amendment allowing him to hang on as president until at least 2036.

It took years for American free-market triumphalists to concede that the capitalist-democratic Russian emancipation of the early 1990s was just as much a matter of Communist Party commissars mutating into absurdly corrupt corporate oligarchs. It’s taking even longer for Canada’s foreign-policy establishment to admit it was wrong to imagine the Chinese Communist Party would become more amenable to democratic values after the People’s Republic was welcomed into the “rules-based international order” following Deng Xiaoping’s reforms of the 1980s.

“Over the past decade, one in six democracies has failed,” the liberal-leaning American think tank Protect Democracy calculates. Even in the United States, faith in democracy itself has been on a steady decline from the days of George W. Bush, right through the Barack Obama years, tanking after the election of Donald Trump.

Heading into the 2020 elections, a Project Democracy poll showed two in five Republican voters said a win for the Democrat Joe Biden would only come about by poll-rigging and electoral fraud, while two in three Democrats said Trump could only win through foreign interference and voter suppression.

Democracy is nowhere near as resilient as the Cold War victors imagined. Just ask Uganda’s Henry Tumukunde. “It means a lot of painstaking efforts,” he told me. “But we stand a good chance, if there are free and fair elections.”