Three Amigos summit: No awkward handshakes—but no concessions on the electric vehicle tax credit, either 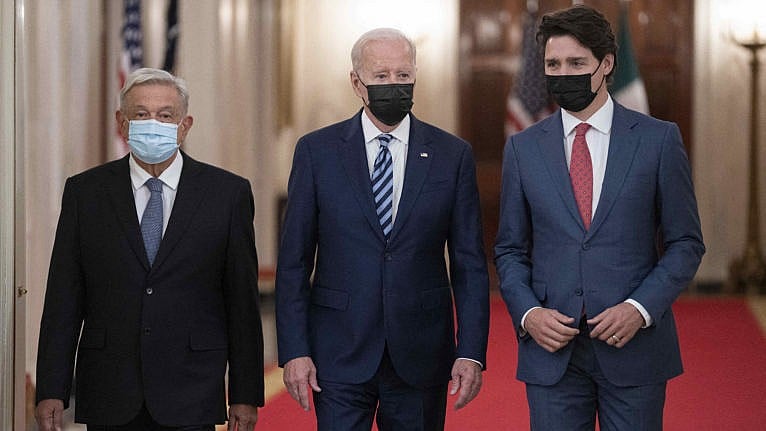 At least the handshakes went well: When Joe Biden, Justin Trudeau and Mexican counterpart Andrés Manuel López Obrador entered the White House’s East Room for their much-hyped trilateral confab, the three masked hombres sat as far apart from each other as the long table would allow. And it does not appear that Trudeau nudged much closer to getting the U.S. President to inject compromise into Congress legislation that includes an electric vehicle tax credit that could freeze out Canadian-made cars and trucks.

Biden, before his earlier one-on-one with Trudeau, was non-committal on what’s suddenly become the top bilateral issue for Canada, one that could wallop its auto sector. “The answer is: I don’t know,” Biden said, when asked about neighbourly exemptions. “And I don’t know what we’re going to be dealing with, quite frankly, when it comes out of legislation.”

It was the first policy topic Trudeau brought up in the one-on-one, the Toronto Star’s Washington-based Edward Keenan writes:

Meanwhile, over in Congress, the House of Representatives was pushing toward a vote on the Build Back Better economic package—including the Buy American policy—possibly late Thursday night. There appeared a good chance that while Trudeau was still in town making the case against it, the House was going to vote in favour of it. So, maybe not a smashing success story for the Canadian delegation. But then, no one expected success on that file in the form of any kind of decision or announcement in Canada’s favour. The best anyone was hoping for was to keep talking about it as the bill makes its way through the political process. And there’s plenty of process left.

The meeting of the leaders from the old NAFTA zone lasted close to three hours. Their joint statement glided past irritants like trade and (on the U.S.-Mexico border) migration, and was predictably thick with terms like “reiterated” and “commit to launch efforts to enhance cooperation” on matters like climate change, trade and the pandemic.

In a break with tradition, there was no three-headed news conference, leaving Trudeau to hop a few blocks down Pennsylvania Avenue to speak with reporters at the Canadian Embassy. Asked repeatedly about what progress he made on the tax credit issue, Trudeau replied the Americans are “very aware of Canada’s position on this… and the threats it poses to over 50 years of integrated auto-making in our two countries.” The Globe’s Adrian Morrow observed: “Translation: he raised repeatedly, but the Americans aren’t budging.”

Much of it was platitudinal in these early stages of a (gulp) long crisis to rebuild from, an all-hands-on-deck sort of show, an emphasis on getting people to safety for now—and some clear linkage with climate change, adaptation and rebuilding with resiliency from Wilkinson, the former environment minister. Anand and Eyre had the most concrete messages to send, with 120 pairs of Canadian Armed Forces boots on the ground now in Abbottsford, 350 more ready for deployment from Edmonton for immediate response. “If needed, we have thousands more members on standby ready to help the province,” Anand said.

Logistical support, human support and financial support—British Columbia will need it from Canada. Asked Thursday about any early price tag, Public Safety Minister Mike Farnworth could only say: “It’s going to be an awful lot.”

Biden offered his thoughts during Trudeau’s visit: “I know we are both keeping our minds close to the families affected by the storms flooding the British Columbia area in the Pacific northwest.” It’s likely B.C. will lean on the Americans for more than thoughts, given how many supply chains were severed—Premier John Horgan is already suggested they’ll need support from U.S. fuel reserves, Global News reports.

Kid, this won’t hurt a bit: The news Canadian parents and their kin have awaited for months finally lands today at 10 a.m. ET, when Health Canada officials announce regulatory approval for the Pfizer-BioNTech vaccine for children aged 5 and up. (Don’t expect a cameo by the Prime Minister; his itinerary says his flight from Washington will still be airborne when briefing begins.)

Canada has expected 2.9 million of Pfizer’s kid-sized doses of the mRNA shot to arrive “shortly” after this approval—a first dose for every child eligible, the Toronto Star’s Alex Boyd explains.

From there, provincial governments will rush to set up and announce their own vaccination approaches. A few provinces have offered parents the chance to “pre-register” their kids, but that mostly amounts to signing up for be notified promptly when there’s something to actually register for.

In the United States, which green-lighted the juvenile Pfizer vaccine on Nov. 2, has vaccinated nearly 10 per cent of its newly eligible children in the first two weeks of that country’s COVID immunization program.

Kenney’s dysfunctional family gathering: After the year Jason Kenney’s had, one imagines Alberta’s premier wishes a weekend spent with his United Conservative Party faithful would be a pleasant refuge from all his other challenges. Not so, not at all.

The UCP holds its first in-person annual convention since 2019 this weekend at a casino hotel on Tsuu T’ina Nation, just outside of Calgary. The grassroots are restive, arguing he doesn’t listen much, and more than 20 constituency associations want a fast-tracked and broader leadership review by March. (One’s currently scheduled for April.) There’ve been leaks all over UCP-land pointing to the various ways Kenney’s team will try to tilt the convention votes and motions in his favour—a corporate executive enlisting employees to sign up and rock the convention floor, as Calgary Herald’s Don Braid reports, or the premier’s office telling legislature staffers how to vote to downplay policy motions that don’t jive with Kenney’s agenda, as CBC Calgary’s Elise von Scheel chronicles.

A motion designed to derail an early leadership review gets debated Friday night, and Kenney will shake off the hospitality suite Saturday morning to deliver a pre-lunch address to the delegate’s ballroom. He’ll almost certainly survive this weekend, whether his tacticians prevail or whether the unhappy members do. But it’s hard to see how he emerges stronger, Maclean’s writes in its scene-setter.