'No more brushing aside the concerns of our workers and our citizens,' Trudeau says at black tie dinner event in Hamburg 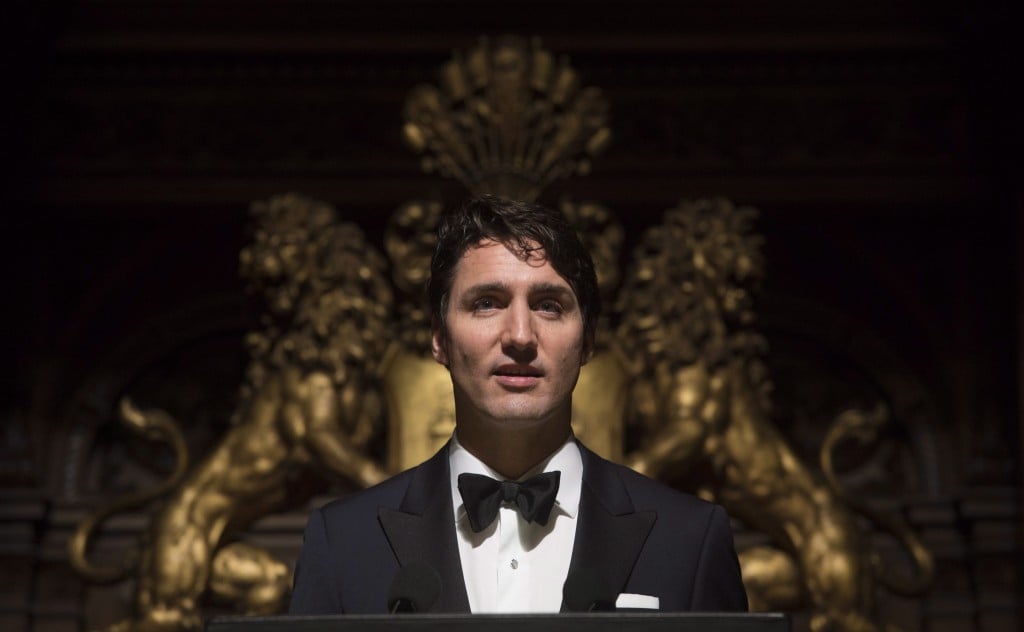 HAMBURG – Prime Minister Justin Trudeau used one of Germany’s most prestigious black-tie galas to tell business leaders to “get real” about the addressing the anxieties of their workers in an uncertain world.

Trudeau delivered the no-holds-barred message to an audience of 400 politicians, business leaders and other notables at the annual St. Matthew’s Banquet in the opulent Hamburg city hall.

The St. Matthew’s Banquet is a 700-year-old event in which the elders of the city-states invited foreign guests to celebrate their friendship. It has heard from kings, presidents, mayors and others in what is now Germany’s second-largest city.

Last year, former British prime minister David Cameron addressed the gathering and laid out his plan for battling his country’s Brexit forces. Cameron failed and Britons voted to leave the European Union, part of a global wave of disruption that culminated with Donald Trump’s surprise victory in the November presidential election.

Officials say Trudeau was mindful of the whirlwind global changes that have taken place since, especially in Europe – rising anti-trade resentment and a backlash against immigration – when he accepted the invitation to address the banquet.

Trudeau has spoken repeatedly in Europe this week about the need for politicians to address the “anxieties” of working people, who are fearful of the pace of change, and of being left behind in the globalized world.

And he has spoken of the need for politicians to do a better job explaining the tangible benefits of agreements such as Canada’s free trade deal with the European Union – a pact the European Parliament ratified earlier in the week over the objections of a vocal civil society movement.

But the prime minister ramped up the message on Friday night in Hamburg, all but telling the corporate elite seated before him to shape up, and stop profiting at the expense of their employees.

“No more brushing aside the concerns of our workers and our citizens,” the prime minister said in prepared remarks. “We have to address the root cause of their worries, and get real about how the changing economy is impacting peoples’ lives.”

He even adopted some of the language of anti-trade movements.

“When companies post record profits on the backs of workers consistently refused full-time work – and the job security that comes with it – people get defeated,” he said.

RELATED: The meaning of a meeting of Europe’s leading nationalist minds

German Foreign Minister Sigmar Gabriel called Trudeau a friend of Europe and praised the Canada-EU free trade deal as an answer to the “new nationalism” in the United States.

Trudeau said the anxiety of working people is turning into anger, and politicians and business leaders need to take heed and take “long-term responsibility” for workers, their families, and the communities in which they operate.

“For business leaders, it’s about thinking beyond your short-term responsibility to your shareholders,” Trudeau said.

“It’s time to pay a living wage, to pay your taxes. And give your workers the benefits – and peace of mind – that come with stable, full-time contracts.”

He said employers can’t leave their employees feeling “overworked and undervalued” and must find ways to help them “modernize their skills for a changing world.”

The prime minister also flaunted his feminism, saying: “When you hear that an employee is expecting a child, congratulate her. Don’t make her question whether or not she’ll have a job to come back to.”

Olaf Scholz, the first mayor of Hamburg, introduced Trudeau by saying he was honouring Germany by attending the banquet.

“How you defend openness, humanity and progress in words and deeds makes Canada a role model for us as well as for the liberal and social forces around the world,” Scholz said.

“It’s just like Leonard Cohen (wrote) … ‘There’s a crack in everything, that’s how the light gets in.”’

Trudeau said he understood the “irony of preaching about the struggles of the middle class to a sea of tuxedoes and ball gowns, while wearing a bow-tie myself.”

Trudeau also noted that his government raised taxes on the wealthiest one per cent while improving child tax benefits. He said his government is “on track” to reduce child poverty in Canada by 40 per cent.

“Whether you’re a business or a government, it’s time to realize that this anger and anxiety we see washing over the world is coming from a very real place,” he said.