Tiptoeing around the Trump in the room - Macleans.ca 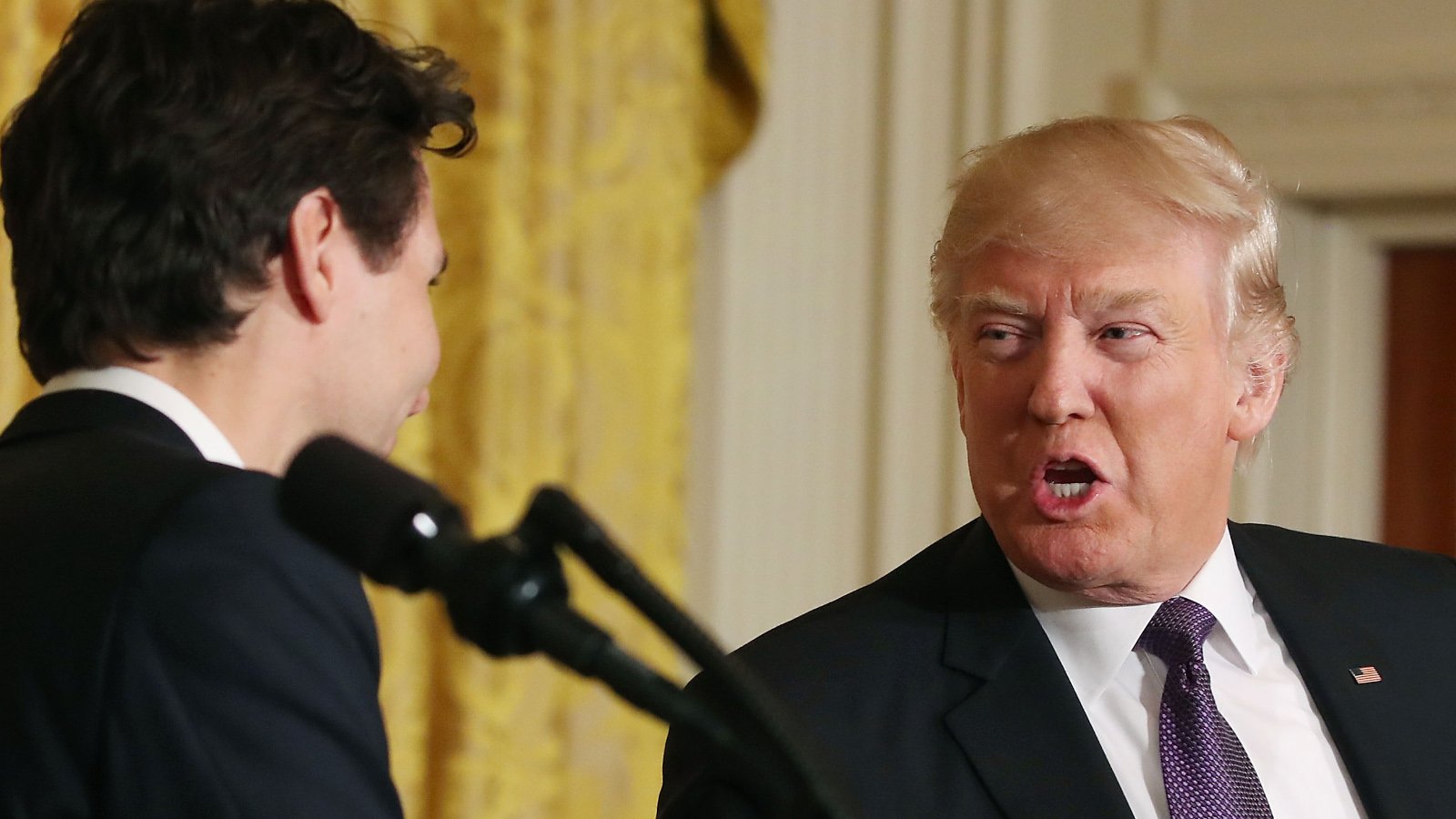 In 1969, Pierre Elliot Trudeau boldly and famously identified the Canadian-U.S. relationship: “Living next to you is in some ways like sleeping with an elephant. No matter how friendly and even-tempered is the beast, if I can call it that, one is affected by every twitch and grunt.” Little could Trudeau Sr. have known that, a half-century later, his eldest son would visit Washington to try to tango with a newly twitching, grunting pachyderm that has proven neither particularly friendly nor even-tempered.

For that reason, the first Trump-Trudeau sit-down (or “tete-a-tete” as it was genteelly referred to in the itinerary) required painstaking choreography. There’s not only the longstanding elephant factor, specifically Canada’s dependence on the U.S. for most of its trade. But now we’re dealing with a new, unpredictable beast: a protectionist U.S. administration with disdain for democratic process with whom the Canadian government has an ideological—or, to use current political parlance, “values”— schism. On one side, there’s a prime minister who literally greeted and hugged Syrian refugees entering Canada; on the other, a president who wants to turn refugees from his country—and round up them up within its borders.

The ensuing fallout over weeks has exposed the symbiosis, and divides, between the two countries as refugee claimants flee the U.S. to seek asylum in Canada. To do so, they’re risking their lives, and losing fingers and toes to frostbite. A Winnipeg centre that welcomed newcomers was full. Five Canadian Muslims—none from Trump’s banned country list—have been denied entry to the U.S.  Muslims in Canada have also been targeted. The horrific terrorist attack at a Quebec City mosque by an avowed white supremacist killed six and wounded eight.

Against that backdrop, the day’s forced pageantry played out in Washington.  Just how synthetic that spectacle actually is can only be fully appreciated by the media retinue who cover it, a group ferried between photo ops and carefully staged press conferences. In between, it idled in the White House press room, a place far smaller and shabbier than one imagines based on TV.

It’s a mark of how little actual information was revealed that body language took on absurd import. The two leaders were scrutinized with the intensity of anthropologists studying primates. How long was their first handshake? Did Trudeau prep by studying footage of Trump’s aggressive tendency to yank people about? What did the prime minister’s firm grip and steadying hand on the president’s arm signal about the state of bilateral relations?

MORE: How memeable moments could actually help world leaders with their Trump problem

All appeared cordial, if careful. Trudeau came buttressed by his team, both his PMO staff and five cabinet ministers—Foreign Affairs Minister Chrystia Freeland, Defence Minister Harjit Sajjan, Public Safety Minister Ralph Goodale, Transport Minister Marc Garneau and Finance Minister Bill Morneau. While Trudeau was transported by car to the White House door, the others strode toward the White House without overcoats in the chilly wind, as if to prove their Canadian vigour.

Tellingly, much of the agenda was designed to flatter Trump, who, only three weeks into his presidency has become one no one dares alienate. Last week, Japan’s Prime Minister Shinzo Abe offered a master class in obsequiousness. Before Trump’s inauguration, he visited the president-elect at Trump Tower in New York, bringing an expensive golf club as a gift. Last week, Abe lauded Trump’s skill as a businessman and a golfer.

Trudeau didn’t do that. But he did leverage his already questionable feminist cred to burnish a bilateral roundtable on women and business. And that abetted Trump, whose male-dominant 22-person cabinet includes only four women (two non-white women, two white) and one non-white man. Still the White House wants to identify him as a champion of women. As an unnamed White House official revealed before the meeting, Trump’s economic agenda will include a “focus on ensuring women enter and stay in the work force and addressing barriers facing female entrepreneurs.”

The roundtable also highlighted Trump’s beloved, and currently embattled, daughter Ivanka, an unofficial advisor to her father and his face on “women’s issues.” Her speech at the Republican National Convention focused on supporting working mothers. She had a hand in her father’s child care and maternity leave plan released during the election. Yet under scrutiny the patina of Ivanka’s progressiveness didn’t hold up: “maternity leave” applies only to women who give birth.

Ivanka was credited by unnamed White House sources in media reports with recruiting participants and setting the agenda for the 45-minute meeting. She sat to Trudeau’s left alongside a mix of female CEOs from the U.S. and Canada, as well as White House Chief of Staff Reince Priebus and David MacNaughton, Canada’s ambassador to the U.S. The brief confab yielded a new initiative, the “United States-Canada Council for the Advancement of Women Business Leaders-Female Entrepreneurs.”

Ivanka’s participation was also destined to burnish her attempts to position herself as a women-in-the-workplace guru, “Women Who Work” literally part of her branding. Items in her Ivanka Trump clothing line boast a tag filled with such empowering maxims as “The greater the challenge, the bigger the opportunity” and “Own your femininity” with the hashtag: #WomenWhoWork. There’s also her upcoming book: Women Who Work: Rewriting the Rules for Success.

The group came together within a week, Linda Hasenfratz, CEO of Guelph, Ont.-based auto parts maker Linamar, told Maclean’s. Chrystia Freeland was a key organizer, she says. Katie Telford, Trudeau’s chief of staff, has also been named as an impetus. Ivanka Trump was not dominant at the table, Hasenfratz says, though she did express concern about the number of women working in STEM fields. Trump gave opening remarks, then listened, she says. The women each had three or four minutes each to speak. How this new council will be different than various empowerment engines set up over the past decades to address constraints on women in the workplace is unclear. The logistics have yet to be figured out, says Hasenfratz, who enthused about the meeting’s “positive tone” and the benefits of cross-border alliances. In this, the stealth suasion of the event is apparent:  creating an event where the Trumps are rewarded for promoting female advancement is a clever way to make the president pay attention to the benefits free trade can have in shared competiveness.

The meeting sidestepped another elephant. While the need for child care and maternity leave was touched on (the U.S. is the only industrialized country that does not offer federally mandated family leave), there was no mention of a major constraint to women’s entrepreneurial ambitions: the Trump administration’s intent to quash women’s reproductive rights. In 2004, Trump was pilloried for saying that “pregnancy is an inconvenient thing for a business,” but he was right. And that’s not about to change. Trump’s new health secretary, Tom Price, is not only against abortion and free birth control but opposed a 2015 nondiscrimination law in the District of Columbia that would have prevented employers from firing workers for using birth control or having an abortion.

Trudeau’s coded Trump-flattery continued with two gifts: the first, a stone sculpture of a lion; the second, a photograph of the president with Pierre Trudeau taken in New York in 1981. In it, Trump stands expounding at a podium while Trudeau Sr. sits to one side, appearing less than impressed. The power balance is clear: Trump is the one giving Trudeau an award.

A smile was fixed on Trump’s face through most of the day but his enthusiasm was muted. That could have nothing to do with Trudeau, of course. Trump’s distraction quotient is high and he spent the previous week under constant bombardment. Still, there was no show of the eager male bonding evident when the president embraced Shinzo Abe last week.  “When I greeted him at the car, I shook hands, but I grabbed him and hugged him because that’s the way we feel,” Trump explained later. The president was far more touchy-feely with British PM Theresa May, holding her hand at a photo-op along the White House colonnade. Trudeau merited a pat on the back.

During the press conference Canadians sat on the left, Americans on the right.   Trump read his statement in a monotone. He seemed bored or tired or both. He spoke of the two countries working “in common cause, against terrorism,” in “common cooperation toward reciprocal trade and shared growth” and in aid of a “stronger trading relationship.” He alluded darkly to another special bond as well: “American and Canadian troops have gone to battle together, fought wars together, and forged the special bonds that come when two nations have shed their blood together—which we have.”

The president appeared zoned out during Trudeau’s impassioned, longer address, though he did perk up  when the prime minister mentioned Winston Churchill. The prime minister highlighted the longstanding ties and “mutual respect” between the two countries—as if U.S.-Canadian diplomacy was business as usual. Trudeau pressed the reciprocity of the relationship focusing on the sort of big numbers Trump likes: “As we know, 35 U.S. states list Canada as their largest export market and our economies benefit from the over $2 billion in two-way trade that takes place every single day.”

Trump’s answers to the four allotted media questions (two from Canadian media about refugees and trade, two from  U.S. media about foreign policy) meandered into self-congratulation about his electoral college win, his success in being able to “keep the bad guys out” and even a jab at North Korea.

Throughout, Trump exhibited his fondness for superlatives. “We are going to have a great relationship with Canada, maybe as good or better, hopefully, than ever before.” Yet Canada didn’t seem to register on Trump’s radar, other than a market.  A joint-statement between the two nations focused on how the U.S. welcomes Canada’s “recently announced decision to launch an open and transparent competition to replace its legacy fleet of CF-18 fighter aircraft.”

Questions from  U.S. media came from Sinclair Television and Daily Caller, Trump-friendly outlets. In response to the NAFTA question, Trump alluded to “tweaking it”  in a way that is “going to benefit both of our countries,” as if that were possible. He compared Canada favourably to “what was happening on the southern border,” a comment that suggests the president wasn’t briefed on a recent report that claimed more refugees were entering across the Canada-U.S. border than the Mexico-U.S.

Trump exited the room to a chorus of questions about the status of National Security Advisor Michael Flynn, who resigned late Monday amid bombshell revelations that he lied about his communications with Russia both after and before the election.

Trudeau also dodged the question of whether Trump’s “moratorium on immigration has merit on national security grounds.” He prevaricated, referring to a history “where [the U.S. and Canada] have differed in our approaches, and that’s always been done firmly and respectfully.” Being critical would make him a bad leader, he said, before suggesting that there was, in fact, something to criticize: “The last thing Canadians expect is for me to come down and lecture another country on how they choose to govern themselves.” He used the opportunity to throw some passive-aggressive Canadian shade: “My role and our responsibility is to continue to govern in such a way that reflects Canadians’ approach and be a positive example in the world.”

That’s 2015 “sunny ways” talk, of course. A mere two years later, as storm clouds gather, and Canada has proven vulnerable to white supremacy and xenophobia, the  upbeat message can ring hollow. But if Monday’s show of stagecraft in Washington indicates, optics matter far more in navigating this new elephant, at least for now.