Three meters above the ground Todd Reichert was pedalling for his life. His goal was to go fast enough to keep his aircraft above ground, while still controlling the 55 kilograms of equipment surrounding him.

Reichart is part of a University of Toronto alumni team called AeroVelo, and on June 13th he piloted the world’s first human-powered helicopter during a test flight at the Ontario Soccer Centre in Vaughan.

Today, AeroVelo received $250,000 as the winner of the AHS Igor I. Sikorsky Human Powered Helicopter Competition. The competition challenged teams from around the world to create a functioning helicopter that could hover for one minute while maintaining flight within a 10-metre square, three metres above the ground. The catch: they could not use fuel or electricity.

More than 20 human-powered helicopters have been designed since the competition began in 1980, but only a few have been able to get off the ground. “I don’t think anybody realized just how difficult the challenge would be,” says Matt Tarascio, chief engineer of Sikorsky innovations.

In 1989 California Polytechnic State University submitted the DaVinci III, which was able to fly for seven seconds. This was followed by Yuri I, an aircraft created by a team from Nihon University in Japan in 1994. The University of Maryland has been actively fighting for the record over the last year, but the team was unable to complete its testing in time.

For Reichert and co-engineer Cameron Robertson, the idea of winning is surreal, especially considering the fierce competition. “Its difficult to take in. For us, this competition was around before we were born,” says Robertson.

“Its actually exactly a third of a century, 33 years to this day,” says Tarascio. “People were saying it can’t be done, that it was impossible.”

And then, on Thursday, June 13, AeroVelo successfully completed the challenge. The team’s winning helicopter is 47-metres wide and is the second largest helicopter ever built. With half an hour left in their testing time, Reichert got up on the bicycle that was being suspended by lightweight, but strong, synthetic lines. “It’s as if you were riding down the street and someone picked you up,” he explains. As he started to pedal, the aircraft rose, maintaining a controlled speed and stability. After a minute he descended, ensuring AeroVelo’s claim to fame. 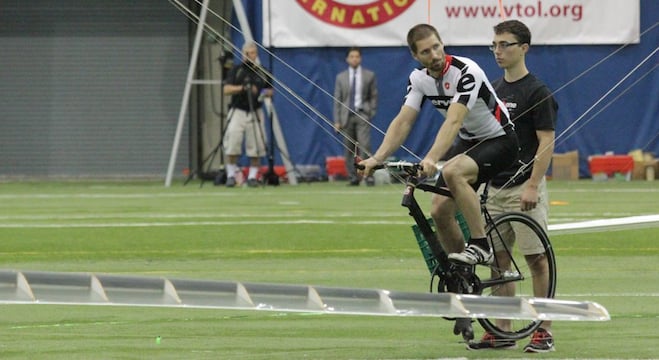 Todd Reichert preparing to lift off the ground. (Courtesy: AeroVelo)

Reichert and Robertson are no strangers to human-powered engineering. They began working together in 2006 on the world’s first human-powered Ornithopter—an aircraft with flapped wings—and they are currently working on human-powered land vehicles capable of achieving highway speeds. What originally attracted this pair to these projects was the challenge between having enough power and building the most efficient aircraft as possible. “You have about the power of a cordless drill and now you have to go and fly,” Robertson says.

They began to work on the helicopter in January 2012. In May 2012, they brought in eight students to help with its construction. Test flights began in August and continued throughout the next eight months.

Besides the grand prize, Reichert feels the more rewarding aspect of this project is showing the public that it is possible to create sustainable transportation. “We do these kinds of human-powered projects because we are really interested in making sure people out there know there are solutions to challenges facing us in terms of sustainability and the environment,” he says. “Creative engineering and design and innovation can solve a lot of problems out there.”

Tarascio is just happy someone finally won the competition. “To me, it was exciting to watch and it is great to see someone prove [the skeptics] wrong.”