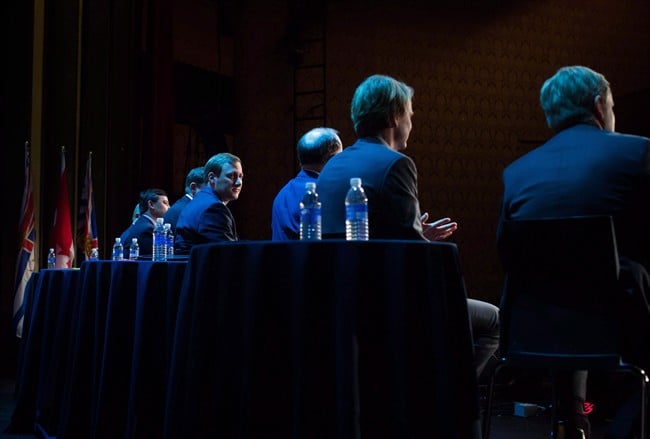 Candidate Brad Trost, centre left, sits on stage with other candidates during a federal Conservative Party leadership debate in Vancouver, B.C., in a February 19, 2017, file photo. THE CANADIAN PRESS/Darryl Dyck

OTTAWA – Some federal Conservative leadership contenders have given interviews to a self-proclaimed online journalist who regularly posts accolades to the superiority of white people, along with diatribes against immigration in general and Muslims in particular.

Video of those largely anodyne interviews appear on Kevin J. Johnston’s YouTube channel, FreedomReport.ca, alongside more inflammatory video rants – including one in which Johnston warns Liberal MP Iqra Khalid, author of a motion condemning Islamophobia, that he’ll be there “with a big, fat smile” to film the moment when she’s shot by a “gun nut.”

The interviews – which also appear on the Mississauga Gazette website, billed as an “independent” news site owned by Johnston – illustrate both the potential and the pitfalls faced by politicians in the era of social media and so-called “citizen journalism.”

Johnston, for his part, said he believes most of the leadership hopefuls were well aware of his views when they agreed to speak to him.

“I think every MP and every MPP in this country knows who I am now,” he said in an interview.

“I have made it very clear that I want them to know who I am and I have sent off numerous letters of complaint to all of them … So, yes, they all know who I am and I know that I’m on the RCMP watch list because the RCMP has already questioned two friends of mine about what my problem is.

“Those are the words they used.”

Mike Patton, a spokesman for Trost’s campaign, said: “Mr. Trost does not vet the writings of reporters prior to answering questions, and any suggestion that he shares the ideology of a reporter because he has answered their questions is misplaced.”

Bernier’s communications director, Maxime Hupe, said his campaign was unaware of Johnston’s views and the candidate certainly doesn’t condone his comments on Khalid, which were posted in mid-February, a month after Bernier spoke to Johnston.

“Maxime obviously does not want anyone to be shot and is against violence,” said Hupe, who arranged the interview with Johnston in the belief that the Mississauga Gazette was an online regional newspaper akin to one that operates in Bernier’s Quebec riding.

“I don’t see why we should be guilty by association here. If Mr. Johnston said bad things in his journal, that’s his thing. That has nothing to do with Maxime.”

RELATED: Can Conservatives really reach out to young Canadians?

Johnston said he doesn’t think Bernier realized he was talking to “Canada’s most outspoken guy.” But if he had been aware, Johnston suspects Bernier would have done the interview anyway.

Indeed, Johnston asserted that, “most Canadians agree with what I’m saying and what I’m posting, but they’ll do it either secretly or they’ll phone me to tell me that they agree.”

He said his YouTube channel has gone from just 40 subscribers at the start of the year to almost 4,000 now and half a million views. And while he used to get “a ton of backlash” to his views just a year ago, he said “the pendulum has swung completely the other way, where Canadians do agree with me and they’re looking for that voice – and I’m obviously that voice.”

While candidates approached for an interview at an event would have little chance to check out the requester, Johnston said both Chong and Lemieux knew who he was but talked to him anyway after an event last Sunday.

“As they say, all press is good press.”

However, Chong’s communications director said the candidate had no idea who Johnston was and simply had a “conversation” with him, as he would with anyone who approaches him at a public event.

“Had Kevin Johnston made a formal request for an interview to the campaign, we would have done our due diligence, discovered the nature of his views and posts, and denied the request,” said Chisholm Pothier.

“Michael has been very clear during this campaign that he rejects the politics of fear and division that we see some others espousing, and that he wants to build a big tent Conservative party that welcomes people of all races, religions and creeds who want to unite around shared conservative principles.”

Similarly, a campaign spokesman said Lemieux didn’t know who Johnston is and doesn’t share his views. Indeed, Johnston’s own video shows Lemieux at the outset of the brief interview saying he thought Johnston was one of the organizers of last Sunday’s event.

Hupe rejected suggestions he should have done an online search to check out Johnston and the Mississauga Gazette before granting an interview with Bernier.

“We’re giving a lot of interviews every day and I can’t frankly go over all the articles that everyone published before,” he said, noting the proliferation of online “journalism.”

“Anyone who wants to be journalist is a journalist now because you can publish online,” Hupe said.

“There’s no national organization that determines who’s a journalist and who is not … We live in a free country and if you want to start your own blog and do your own reporting, you can do that.”

Johnston’s posts include a video rant against Khalid, whom he labels a “racist terrorist scumbag” who hates “white people” and wants “Islam to take over the world.”

Another video, posted a few days before Bernier’s interview, features Johnston urging white males to “be white and be proud.” He calls the Black Lives Matter movement “a terrorist organization” and Arab Muslims “the most racist of the racists,” among other screeds. His Twitter feed is similarly replete with expletive-filled diatribes against Muslims, “social justice warriors,” and feminists.

An online search also turns up articles about a running feud between Johnston and Mississauga Mayor Bonnie Crombie, whom he ran against in the 2014 mayoral race. Crombie last year filed a hate-crime complaint with Peel police after the Mississauga Gazette published an article about her.

Khalid last month read portions of Johnston’s video screed against her in the House of Commons, while describing thousands of death threats and racist slurs she’s received since introducing her motion. She would not comment on the Conservative leadership contenders who’ve given him interviews.

But Omar Alghabra, Liberal MP for a neighbouring riding, said Bernier and other contenders are inadvertently legitimizing Johnston and need to publicly distance themselves from him.

Canadians expect political leaders “to set an example and to declare how they feel about these types of agitators,” Alghabra said.

Failure to repudiate Johnston would suggest the Tory leadership hopefuls are actually trying to court people who agree with Johnston’s views without openly subscribing to them themselves, he added.

“(It) opens up these questions … was this deliberate, was this another form of dog-whistle politics?”

However, Pothier countered: “I don’t think there’s anything anyone could do, advertently or inadvertently, that would help legitimize Kevin Johnston’s claim to be a journalist.”