Trost wants refund for Conservative candidates who drop out

Trost's campaign suggests party allow candidates a refund on some of the $50,000 registration fee if they drop out 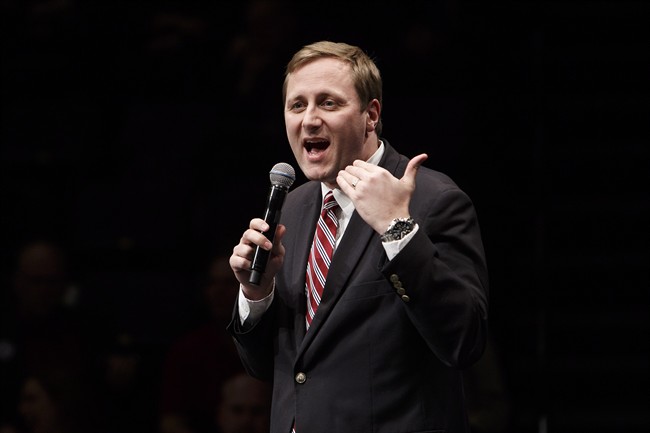 Brad Trost speaks during the Conservative leadership debate at the Maclab Theatre in Edmonton, Alta., on Tuesday, Feb. 28, 2017. THE CANADIAN PRESS/Codie McLachlan

OTTAWA – One of the hopefuls vying for the leadership of the federal Conservatives says the party has a role to play in helping to cull the sprawling herd of candidates — a role Tory officials don’t appear to have much interest in.

Brad Trost’s campaign has sent a letter to party headquarters suggesting they allow candidates to get a refund on a portion of their $50,000 registration fee if they drop out before a yet-to-be specified deadline.

Party members will find it confusing to have to choose from among 14 names on a ranked ballot, and the fact it allows them to list only their top 10 suggests that a thinner field would benefit everyone, Trost added.

RELATED: Is Kevin O’Leary really serious about his promises?

Rather than seeing candidates quit the race under pressure from rivals, he continued, it should fall to the party to manage the size of the field.

“So, we’re suggesting the party give some incentive to have people who are realistically looking at their own internal polling data and haven’t seen any movement in a few weeks to say, ‘Hey, I think I’m going to pull out.'”

Trost, however, said he has no plans to be among those who might take the party up on an offer, nor would he say whom he thinks ought to go.

After a leadership debate last week in Edmonton, candidate Lisa Raitt suggested it was also time for a conversation about paring down the list.

“There are 14 of us. There are seven of us who should be having conversations about what is going to happen, how many ballots will this go,” Raitt was quoted in media reports as saying.

“We are getting to the point in time where we have to be very sensical about what we want for the future of this party.”

Candidates paid a non-refundable fee of $50,000 to enter and another $50,000 as a deposit they can get back in full at the end of the race if they break no rules.

They all have until March 31 to drop out and get their name off the ballot. If they do so at any point before then, they’d get their $50,000 compliance deposit back, a party spokesman said Monday.

If they drop out after March 31, the party would hold the compliance fee until the race itself concludes. The rest, it appears, would remain in party coffers.

“The party will not be picking and choosing candidates to encourage to drop out,” said spokesman Cory Hann.

“Candidates will have to reflect on their own candidacies, and come to their own conclusions, but it will not be a matter for which the party can or will insert itself.”

Tony Clement, who withdrew from the race in October prior to any deadlines for paying the required fees, said the party does need to be a bit clearer with candidates about existing options to get some of the funds back.

“I’m aware,” he said, “that leadership candidates are seeking clarification on this very point even today.”