Trudeau and Scheer agree: Election 2019 is going to get nasty

Oct. 22: Scheer test drives his campaign by zeroing in on Trudeau's broken deficit promise, while Trudeau should do himself a big favour and release the Mark Norman documents 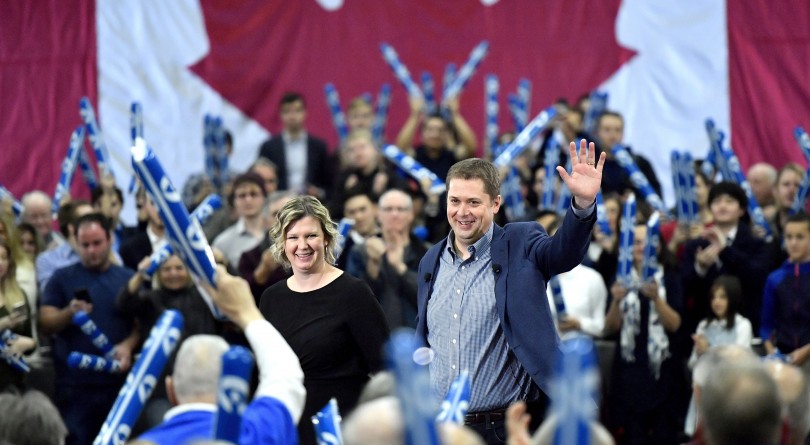 Conservative leader Andrew Scheer waves to supporters as his wife Jill joins him on stage, following a pre-election event in Ottawa on Sunday, Oct. 21, 2018. THE CANADIAN PRESS/Justin Tang

With one year to go until the 2019 election—and fresh from picking a Twitter fight with Teen Vogue magazine about the merits of capitalism as a mechanism for eliminating global poverty—Andrew Scheer gave his campaign pitch to voters a test run on Sunday.(Canadian Press, Twitter)

Riding a wave of recent momentum—two provincial elections won by right-leaning premiers, a federal by-election victory in Quebec and MP Leona Alleslev’s floor-crossing—Scheer zeroed in on the Trudeau government’s blown budget promises. “Remember those? Remember those teeny, tiny temporary deficits?” he mockingly asked, two days after the release of the federal government’s annual financial report showed Ottawa ran up a deficit of $19 billion last fiscal year—roughly twice the size of what Trudeau promised during the last campaign. (CTV News)

Trudeau, an incumbent prime minister at the head of a majority government, is a global celebrity with wide name recognition in Canada. By contrast, four in 10 of the Canadian adults surveyed by Ipsos could not name Scheer as the opposition leader and nearly half — 49 per cent — of those surveyed could not name Singh as NDP leader. (Global News)

Still, CBC poll guru Éric Grenier says Trudeau continues to enjoy an edge. The CBC Poll Tracker, an amalgam of public poll data, puts the Liberals at 37.3 per cent support against the Conservative’s 33.1 per cent. The NDP is a distant third at 15.5 per cent and falling. (CBC News)

If there’s one thing Trudeau and Scheer agree on, it’s that the upcoming campaign will be nasty, so nasty.

Andrew MacDougall has some advice for the Trudeau government as it dodges questions about its roll in the breach of trust case against Vice-Chief of the Defence Staff Mark Norman—release any and all relevant documents because the truth will eventually out, and this saga isn’t going away any time soon:

For one, L’Affaire Norman, despite being arcane (a primer can be found here), is the kind of palace intrigue Ottawa journalists crave; a juicy story about a big-money contract, broken cabinet confidences, an RCMP investigation and hints of a possible government cover-up. The story even involves one of their own, former CBC journalist James Cudmore, who went to work for the Department of Defence weeks after breaking the original story of the Cabinet’s supply ship deliberations.

Then you have the opposition, who are busy launching their own Norman invasion, an inquisition that has spilled more information into the public domain, material that is prompting further rounds of questioning.

In other words, Norman isn’t going away. And he’s starting to bite. (Maclean’s)

Canada joined other countries Sunday in condemning Saudi Arabia for the killing of Washington Post columnist Jamal Khashoggi, after the country gave up denying any involvement in his death. But the Saudi government’s whopper of a claim that Khashoggi died after getting into a “fistfight” with more than a dozen men lacked “consistency and credibility,” Canada’s Foreign Minister Chrystia Freeland said in a statement. But so far Ottawa has not signalled any plan to block arms exports to the Arab Kingdom, something Germany said it is doing until there is clarity about Khashoggi’s death. (Canadian Press, Reuters)

Posted pot: Baring a last-minute labour deal, Canada Post workers are set to begin rotating strikes this morning, with the first cities to be hit being Victoria, Edmonton, Windsor and Halifax. Governments and agencies now in the business of peddling pot are assuring their clients they’ll get their weed, eventually. Alberta Gaming Liquor and Cannabis and the Ontario Cannabis Store both have backup plans in place to keep the marijuana moving. (Canadian Press, Global News)