Politics Insider for Aug. 19: The battle over vaccine policy, horror in Kabul, and a sketchy Ontario PC fundraising letter 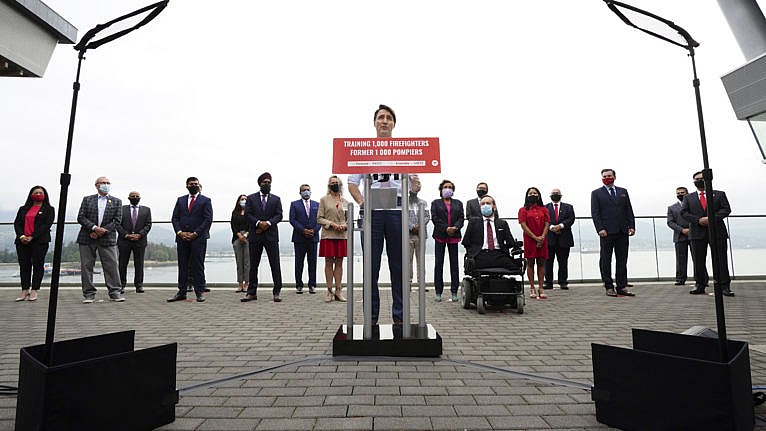 Justin Trudeau seemed to downplay the importance of inflation in Vancouver on Wednesday after Statistics Canada reported a worrying 3.7 per cent rate in July monetary policy. “When I think about the biggest, most important economic policy this government, if re-elected, would move forward, you’ll forgive me if I don’t think about monetary policy. You’ll understand that I think about families.” Bloomberg has the story.

Conservative pundits are framing his comment as a gaffe. The Sun’s Brian Lilley has a column saying it shows Trudeau is out of touch. Erin O’Toole responded in Quebec City, blaming Trudeau and also Jagmeet Singh for the increase, CP reports. But O’Toole then talked up his promise to waive the GST in December: “It’s recognizing we need to let families get ahead and at the same time support brick-and-mortar retail stores that are falling behind. We are thinking outside the box to give people a little bit more of their own money. That’s never going to happen with Justin Trudeau or Mr. Singh. They want to increase taxes. They are the reason why there is inflation.”

We will leave it to economists to explain whether waiving sales tax would reduce inflation, but think it wouldn’t, and are tempted to discount the whole exchange as empty partisan to-and-fro. Economist Trevor Tombe noted on Twitter that much of the increase came from an increase in the price of oil and not policies set by politicians.

Vaccine battle: The two parties also vied for electoral high ground on vaccine policy on Wednesday. The Conservatives sent candidates a directive Tuesday morning that they either vaccinate or take a daily rapid test, Global reports, and Trudeau doubled down on his plan to require proof of vaccination for all those looking to travel domestically.

N.S. lessons: The parties seem to believe vaccine policy is a vote mover, but it does not appear to have been decisive in Tim Houston’s upset victory in Nova Scotia, your correspondent observes in a column on the election result there, which ought to be a wake-up call for the federal Liberals.

The Star has one report on how Trudeau and O’Toole spun the Nova Scotia results, and another noting that Houston made a point of labelling himself a “red Tory,” not a federal Conservative.

Mask up: Vaccinated or no, all voters will have to mask up to mark their ballots, Elections Canada said Wednesday. CP has the story.

Housing tax: In Vancouver, Singh proposed a 20-per-cent tax on foreign home buyers, which he also promised in the last election, CP reports.

Horror in Kabul: In Maclean’s, Adnan R. Khan has a heartfelt column on Trudeau’s failure to articulate a sense of urgency or gravity around the evacuation of Afghan allies from Kabul before the Taliban get them.

As a Canadian, it’s been frustrating to watch the efforts of friends and colleagues from the U.S., France and Germany bear fruit while Canadians wait in limbo. As of Wednesday, the Americans have been flying out evacuation flights every hour while the French have set up twice daily flights. Germany attempted a flight on Monday night but it was forced to take off because of gunfire after spending only a half hour on the tarmac, and boarding a mere seven evacuees. But at least Germany tried, and German officials have been frantically compiling lists of vulnerable Afghans so that when it is safe to send in evacuation flights, officials at the airport will be ready and the flights will not leave empty again. Canada, meanwhile, has three airplanes, including a massive Globemaster military transport, sitting in Kuwait waiting to conduct evacuations. Canadians in Kabul tell me they have repeatedly asked for details about when those flights might take place only to be told there is no information.

Sketchy: Ontario opposition parties are complaining about what appears to be a fundraising letter designed to resemble an invoice from the governing Progressive Conservatives, CP reports. North Bay, Ont., resident Veronica Doyon says a letter from the party was delivered to her home and displays the word invoice across the top, with the phrase “please pay today.” The Progressive Conservatives and Premier Doug Ford’s office did not respond to repeated requests for comment.

Check the Bulldog: If that’s not enough election news for you, have a look at the Bulldog, Maclean’s live blog, featuring a cast of all stars, which is updated throughout the day. Today there are items on: Electoral barriers to low-income candidates (by Fatima Syed), Spendy platforms (by Shannon Proudfoot), a mediation on the usefulness of vaccines as a wedge (by Paul Wells) and a theory about O’Toole’s memorable cover photo (by Andrew MacDougall), among other things.