Trudeau flies to Mexico amid fears NAFTA could end

WASHINGTON – Prime Minister Justin Trudeau is leaving one country whose political leaders are mixed about saving NAFTA and is on his way to another where officials are uneasy about the fate of the trade deal.

Trudeau goes to Mexico today in the aftermath of a day’s worth of meetings in Washington, D.C., largely focused on saving the trilateral trade pact.

U.S. President Donald Trump said ahead of meetings with Trudeau that it would be fine if the North American Free Trade Agreement was just terminated, though members of Congress expressed hope earlier in the day it could be reworked.

A similar tension appears to exist in Mexico, where President Enrique Pena Nieto has pledged to defend the deal, but some of his senior leadership appear to be laying groundwork for it to fail.

The country’s foreign relations secretary said this week it would not be a big deal for Mexico to just walk away from the talks, and that Mexico won’t accept “limited, managed trade,” an apparent reference to demands for higher U.S. and regional content rules on products like auto parts.

Meanwhile, a veteran Mexican diplomat has expressed fears about the possibility that NAFTA could be ditched in favour of bilateral agreements, an issue raised by Trump as well.

“Some of us in Mexico think that on several occasions our Canadian friends have come close to throwing us under the bus,” said Arturo Sarukhan, the former Mexican ambassador to the U.S., said at a NAFTA-related event hosted by Dentons law firm in D.C. on Wednesday.

“How do we Mexicans ensure (our) Canadian friends stay focused on a trilateral approach?”

Trudeau was asked whether a bilateral deal with Mexico could be in the cards should the trilateral talks fail.

MORE: Is the U.S. arranging things so Trump can walk away from NAFTA?

He said he knows there are other paths that could be pursued, and they’ll be followed if necessary.

For now, he remains optimistic.

“So saying, we are ready for anything and we will continue to work diligently to protect Canadian interests, to stand up for jobs, and look for opportunities for Canadian business and citizens of all of our friends and neighbour countries to do well.” 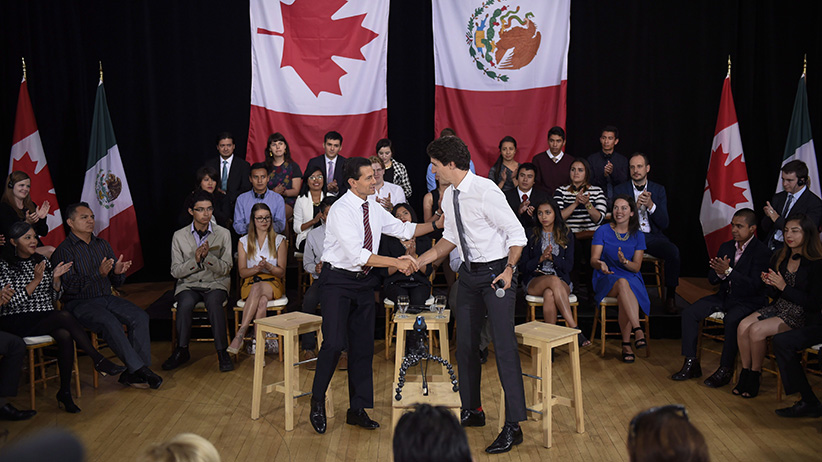 Trudeau’s visit to Mexico is his first official sojourn to the country and follows Pena Nieto’s visit to Canada in June 2016.

That meeting resolved some long-standing disputes between the two countries, including a reopening of Mexico to Canadian beef and a lift of the visa requirement the former Conservative government had imposed on Mexican nationals in response to thousands of asylum claims being lodged by them.

The vast majority of those claims went on to be denied, and the Tories had suggested Mexicans were trying to take advantage of Canada’s system, an approach that went on to become a major diplomatic irritant.

Since the visa lift, tourism between Canada and Mexico has increased, though asylum claims have too; close to 950 have been lodged since the start of this year, compared to 250 in 2016. The year before the visa was imposed there were 9,500.

But Pena Nieto’s time at the helm of the Mexican government is coming to an end, with elections in his country scheduled for 2018.

MORE: Can Donald Trump pull the U.S. out of NAFTA all on his own?

The vote is one of the reasons NAFTA negotiators are hoping to get a deal signed by year’s end.

One of Trudeau’s goals for the Mexico trip, however, is to lay the groundwork for a solid working relationship with whomever will succeed Pena Nieto.

Trudeau will address the Mexican Senate on Friday to send a signal that Canada considers Mexico one of its top partners and wants to continue to work together on a number of fronts.

He’s also expected to tour recovery efforts in the country on Thursday as a show of solidarity following two major earthquakes last month.

Tens of thousands of homes and apartments were destroyed and will have to be rebuilt following the Sept. 19 magnitude 7.1 quake, which killed 369 people, and an earlier, even more powerful one that struck in southern Mexico on Sept. 7 with a magnitude of 8.1.

With files from Alexander Panetta and the Associated Press