The Liberal cabinet gathers in St. John's and marks the anniversary of 9/11 at showing of Come From Away 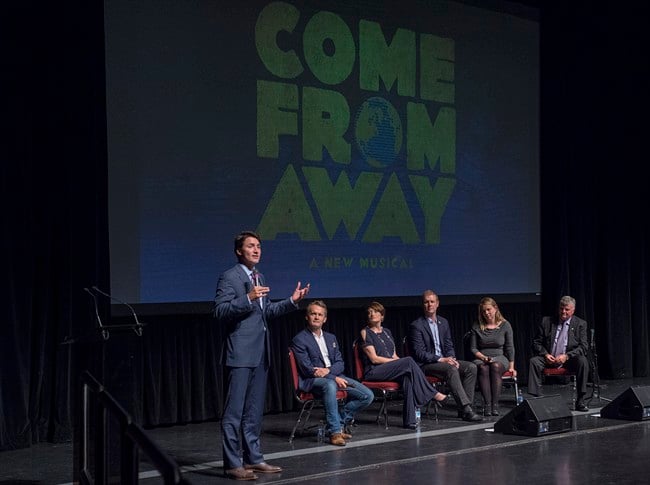 OTTAWA – Prime Minister Justin Trudeau and his cabinet are gathering in St. John’s, N.L., where they will look to the past before preparing for the months ahead and the second half of their mandate.

The visit to Newfoundland began with Trudeau marking the anniversary of the Sept. 11 terrorist attacks by joining a discussion on how a small community opened its doors to thousands of stranded airline passengers after U.S. air space was closed.

The prime minister attended the Come From Away forum — named for the award-winning Broadway musical that chronicles how the residents of Gander, N.L., responded when nearly 7,000 passengers and crew from 38 planes were diverted there following the attacks.

MORE: An interview with Justin Trudeau

“People have been struggling for the last week,” Trudeau told the audience Monday night, referring to the ongoing havoc of hurricanes Irma and Harvey.

“It’s these times we come together when terrible things happen. We see what’s at the core of each and every one of us.”

Trudeau said he believes human beings fundamentally want to be good to each other.

The “Come From Away” musical reduces him to tears but it’s not a “magical” one-off story, he added.

“It’s pretty damn special but it’s not unique,” he said of the generosity shown in Newfoundland.

Instead, it’s a reminder “that for all the bad news we see on the TV every night … That’s not the whole story.

“We are better than we sometimes think we are. Each and every one of us.”

The crowd of invited guests in St. John’s included 20 Canadian Red Cross volunteers who helped passengers from all over the world stranded for about five days in Newfoundland after 9/11.

Paul Greene was among those who spent the week after the attacks handing out “comfort kits” to travellers from across the U.S. and Europe. They had suddenly diverted to the island in the North Atlantic on Canada’s easternmost edge — a place many had never heard of or ever intended to visit.

RELATED: Des Dillon on how Newfoundlanders pitched in on 9/11

Many were afraid, disoriented and had to leave the aircraft without so much as a toothbrush, Greene said.

“We helped a lot of people find lodging and look after immediate needs.”

“Come From Away” celebrates what happened in the Gander, N.L., region but Greene said many passengers also needed help in St. John’s.

Jim Gosse and his wife Karen of Mount Pearl, N.L., plan to see the play in New York this fall.

“It has just been amazing,” she said of the attention the hit production has brought to Newfoundland.

“It gave us that sense of being very proud.”

Gander Mayor Claude Elliott drew laughs as he recounted how many fans of the play have told him they want to live the life of a Newfoundlander.

“You’re all so happy,” he quoted them as saying before offering his standard response: “Yeah, but that’s after a bottle of rum.”

Newfoundland actor Petrina Bromley, part of the Broadway cast, said the story is a redeeming chance to revisit something awful.

On Tuesday and Wednesday, Trudeau and his ministers — including Newfoundland MP Seamus O’Regan, who became minister for veterans affairs earlier this month in a cabinet shuffle that followed the resignation of Judy Foote, a long-time Liberal MP from the province — will hunker down for their annual cabinet retreat.

RELATED: Towards government by Rotten Tomatoes

The relationship with the United States and administration of President Donald Trump will continue to be a focus of discussion, especially as Ottawa is to host the next round of North American Free Trade Agreement negotiations Sept. 23-27.

David MacNaughton, Canada’s ambassador in Washington, D.C., will update ministers on that file.

The cabinet ministers will also hear from Anil Arora, the head of Statistics Canada, who will go over the results of the 2016 census and provide an update on the demographics of the country to help inform policy decisions going forward.

The retreat will also give ministers a chance to share updates — and grill each other — on their own files, such as what the federal government is doing to assist Canadians affected by the devastation caused by hurricane Irma, as well as the ever-present task of promoting economic growth.

There are just over two years left before the 2019 federal election, so some of the talk is also expected to focus on how the Liberals can make good on more of their promises before Canadians head to the polls.

The cabinet will look at a busy legislative agenda this fall, which includes some massive bills such as the proposed legalization of cannabis for recreational use and a new National Security Act. The Liberals also face a new Conservative leader and an increasingly unpredictable Senate.

“We always want to work as productively as possible in Parliament and have respectful and productive exchanges with all members of Parliament in the House,” said Cameron Ahmad, a spokesman for Trudeau.

“At the same time, we have a mandate we were elected on to fulfil,” said Ahmad, who then said the parts of the mandate dealing with jobs and the economy will be the biggest priority.

The cabinet gathering comes on the heels of a Liberal caucus retreat in Kelowna, B.C., last week, where backbench MPs were not shy about airing their concerns about a plan to end tax provisions used by a growing number of small businesses.

Greg MacEachern, a former Liberal strategist, said it was probably one of those times when cabinet ministers — especially those who took on that role as rookies — likely learned the importance of MPs.

“Those cabinet ministers don’t get to be in cabinet unless they form a government, so you need these MPs,” he said. “I think they got a real quick crash course in constituency business,” said MacEachern, who is now with the lobby firm Environics Communications.

With files from Sue Bailey in St. John’s