Trudeau hits the beach in Tofino. At least he isn't surfing.

Image of the Week: Symbolism is an important part of reconciliation with First Nations. The PM's oceanside getaway could not have made that clearer. 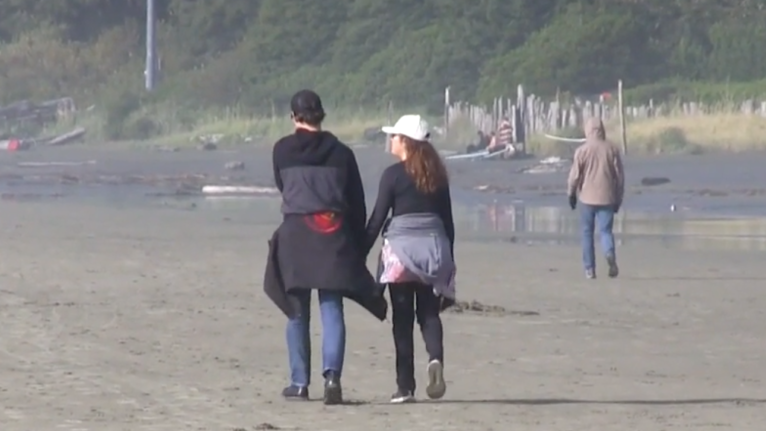 Trudeau walking the beach near Tofino, B.C. with his wife Sophie. (Global/@KamilKaramali/Twitter)

Of the Truth and Reconciliation Commission’s 94 calls to action, unveiled back in 2015, the federal government has only completed 13. Some of those achievements are symbolic, like establishing an official day of reflection, a statutory holiday to honour Indigenous communities damaged by the residential school system. But symbols matter. The orange shirts worn by thousands of Canadians at rallies across the country are one such symbol. The Prime Minister taking the day off with his family to unwind at a favourite surf spot is a different kind. There are dozens of questions worth asking Justin Trudeau: Why did his daily itinerary mislead the media and public by claiming he was in “private meetings” in Ottawa? Why did his staff change his location to Tofino, B.C., only after he was found out? Did he think he could sneak away without Canadians caring? Why did he choose Sept. 30, of all days, to take this vacation? Why didn’t he at least reach out to the First Nation in Tofino? Why didn’t any of his advisors point out this was a horrible idea? All good questions—and a reporter with Global News, to his credit, tried to put them to the PM after catching up with him on his beach walk. But Trudeau wasn’t in the mood to reply. On the upside, this may turn into a day of reflection for Prime Minister after all.