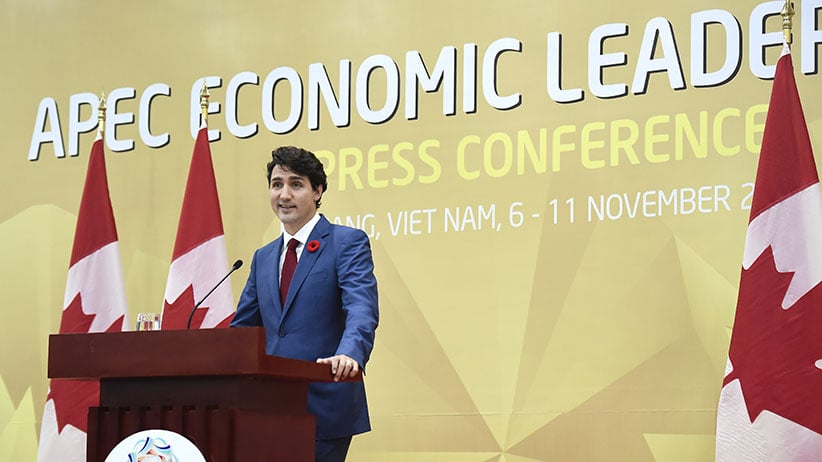 Canada’s Prime Minister Justin Trudeau speaks at a press conference at the conclusion of the Asia-Pacific Economic Cooperation (APEC) Summit in the central Vietnamese city of Danang on November 11, 2017. (LILLIAN SUWANRUMPHA/AFP/Getty Images)

AMRITSAR, India — Prime Minister Justin Trudeau says he made it “very, very clear” to the chief minister of Punjab that Canada supports a united India and condemns violent extremism, describing repeated allegations from the leader of the predominately Sikh region that Canadian ministers are separatists as misunderstandings and extremely false.

Trudeau and his Defence Minister Harjit Sajjan met with Amarinder Singh on Wednesday in part to try to mend fences with the state where a majority of Indian Canadians are from.

“We will always stand against violent extremism, but we understand that diversity of views is one of the great strengths of Canada,” Trudeau said. “I was able to make that very clear to him.”

READ: The troubles facing Justin Trudeau on his first state visit to India

Singh told an Indian news agency he raised concerns with Trudeau about money coming out of Canada to support Sikh separatist extremists and about the existence of extremist elements in Canada, including financing for violent attacks in India. He said Trudeau promised he would look into it.

The meeting began with a discussion of Sikh extremism in order to set the record straight, Trudeau said.

He was later asked by reporters whether the government would speak out against Sikh Canadians reportedly displaying martyr posters of the mastermind behind the deadly Air India attack, carried out by Sikh militants in 1985.

“I do not think we should ever be glorifying mass murderers and I’m happy to condemn that,” Trudeau said.

Singh had refused to meet with Sajjan last spring, saying he was sympathetic to the Sikh separatist cause. Initially, Trudeau was not going to meet with Singh but changed his mind at Sajjan’s request.

Despite the tensions around the separatist issue, Trudeau was warmly welcomed in Amritsar, with banners carrying his likeness around the city.

Thousands of Sikhs greeted Trudeau at the Golden Temple prior to the meeting, lining the walkways, holding hands and calling out religious greetings at one of the holiest sights in Sikhism.

Trudeau will meet with Indian Prime Minister Narendra Modi and has plans to address a Delhi business forum later this week.