Trudeau sends a signal to Alberta. Cue the squirming.

Alberta got its cabinet minister, but the real focus will be on the new names at environment and natural resources, and how they apply the government's 'just transition' 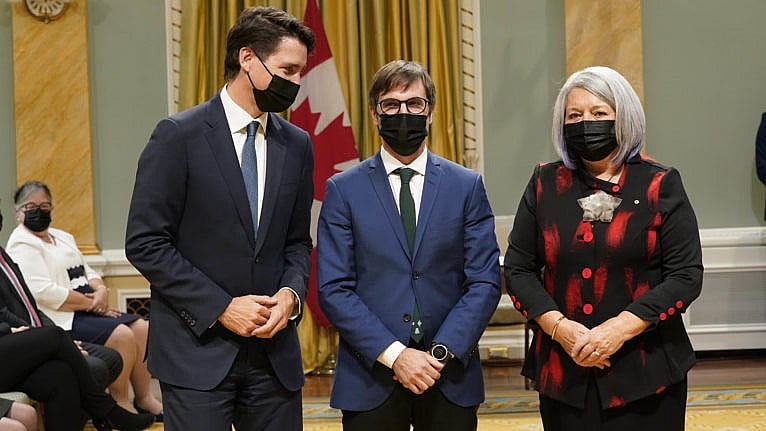 Trudeau, and Gov. Gen. Mary Simon, pose with Guilbeault at a cabinet swearing-in ceremony at Rideau Hall in Ottawa, on Oct.26, 2021 (Adrian Wyld/CP)

Randy Boissonnault ends the fourth-largest province’s cabinet drought, which coincided with the two years of Alberta having no MPs for Justin Trudeau to choose from.

The Edmonton Centre MP will be the tourism minister, a junior portfolio tucked within the Innovation, Science and Economic Development Canada. Every Alberta politician should be lucky enough to have regular trips to Banff and Jasper within their mandate.

But as with any modern cabinet, the picks that truly matter to Alberta are the ones governing the oil and gas sector and the carbon it emits by the megatonne. Enter the preoccupation. Enter, quite literally, the activist environment minister. And cue the Alberta squirming.

Steven Guilbeault’s resume is quite well known in the oil-producing province: his extensive experience with environmentalist group Équiterre and campaigning against pipelines and the oil sands, even reported lobbying within Trudeau’s cabinet last year against the doomed Teck Resources bitumen mine. Just as there was relief from Alberta industry when Guilbeault didn’t get his coveted Environment and Climate Change file in 2019, there’s high anxiety that he got it this time.

Premier Jason Kenney, whose moribund approval ratings have suggested he could use an external enemy to rally Albertans against, said Guilbeault’s activist past “suggests somebody who is more of an absolutist than a pragmatist” and forecasts that Ottawa may pursue a “radical agenda that would lead to mass unemployment.”

Trudeau’s appointment of Guilbeault definitely sends a signal, and perhaps anticipates this initial shock and concern from the energy sector and its political boosters. The message may be the same for the crowd gathering next week at the climate conference in Glasgow and the crowd huddling for coffee daily in oil project trailers near Grande Prairie, Alta.—this government itself wants to move further and faster on curbing emissions. Perhaps taking more of an activist tilt. Not a get-arrested-for-scaling-the-CN-Tower-to-label-Canada-climate-killers tilt, as Guilbeault himself did 20 years ago, but there is a directional shift at work here. Trudeau nudged toward a more assertive approach before the election with tougher emissions targets, and with election promises to demand more action from the oil and gas sector, toward lowering its overall carbon pollution rather than merely per-barrel emissions as production expands.

But this isn’t a government that’s going to suddenly go the full Guilbeault and abandon the federally owned Trans Mountain pipeline expansion project, and the new environment minister himself will have to concede this point, too. To parts of the activist world Guilbeault comes from—one U.S. green campaigner fondly tweeted about the 2001 CN Tower stunt Tuesday and called expectations on the minister sky high—the moderate and pragmatic tack Trudeau binds him to will be frustration.

Moderation will also come from new Natural Resources Minister Jonathan Wilkinson, the Vancouver-area MP who has held Environment for the last two years, and hailed from the tech sector. Even Kenney praised him as a “good-faith partner” for the Alberta government and industry. Ottawa and the business world increasingly see those Natural Resources and Environment ministries as tandem files in the climate change and regulatory fronts—and with Wilkinson’s move, it further lays waste to the old days of those two ministers being at odds with each other as cheerleader and foe of fossil fuel development. Carbon emissions become their common foe.

Alberta tends to get tetchier over rhetoric than it does over actual policy—witness the long memories of a 2017 town-hall remark by Trudeau that he’d “phase out” the oil sands—and this is where Guilbeault’s appointment may remain as incendiary as it seemed Tuesday. Environment and Climate Change can require a diplomat’s deft touch with affected industry leaders, and there’s little to inspire confidence on this front, both because of Guilbeault’s “tar sands campaign” history and his struggles to communicate whatever it was Bill C-10 would actually change. Expect Wilkinson and Trudeau to have to do a fair bit of mop-up, and for Kenney to be summoned regularly to thunder with great, great umbrage.

A major test, past Glasgow, will be how Wilkinson and Guilbeault handle their government’s buzzy term: “just transition.” Natural Resources Canada quietly held a public consultation period this summer on this plan to support the fossil fuel sector through a decarbonizing future without massive disruption and job loss. Like the term “phase out” that got Trudeau into such hot water previously, a “just transition” is notionally supposed to signal a gradual and measured shift. The usual critics have overlooked any such intended nuance, and forecast a rapid and bumpy government-mandated end to Alberta’s most vital and generationally lucrative industry. It will fall in large part to Steven Guilbeault to maintain a steady and reassuring tone that this isn’t the case. His past doesn’t suggest he’s perfectly suited for this task, but it’s the task he now has.