'As a government, we need to look 40 years down the road, not just four,' Trudeau says 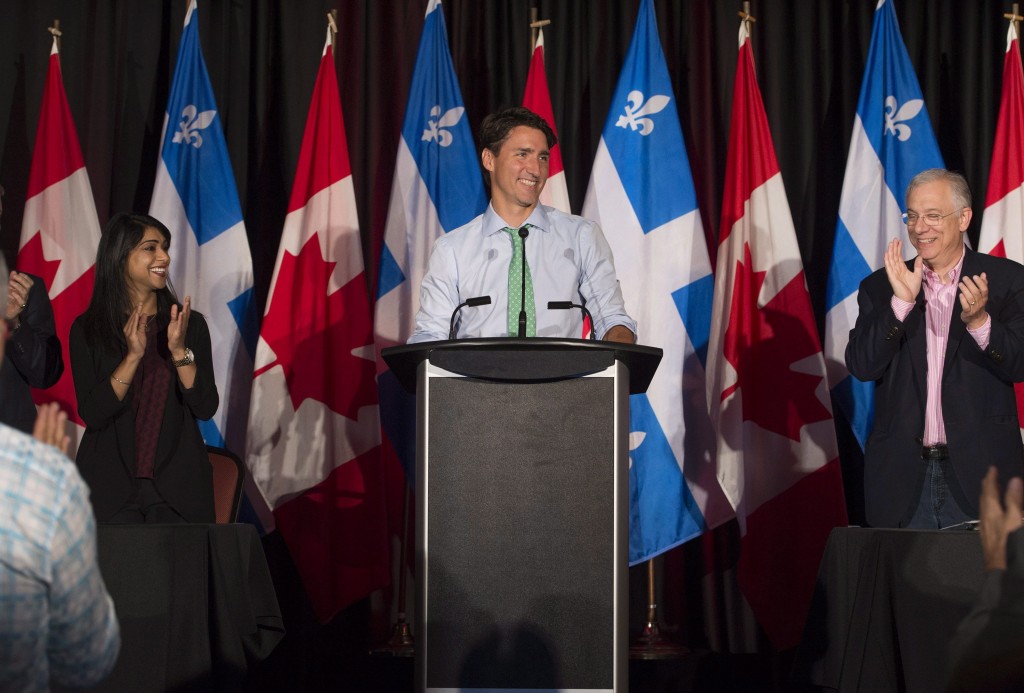 SAGUENAY, Que. – Prime Minister Justin Trudeau cautioned his Liberal MPs on Thursday to resist resting on their laurels now that they have formed government, and to avoid becoming too distracted by the daily ups and downs of life in politics.

“We should be proud of what we’ve accomplished, but never satisfied,” Trudeau told the national Liberal caucus, which gathered in Saguenay, Que., to hammer out the legislative and political agenda before returning to Parliament Hill next month.

“I know that it’s easy to get caught up in the day-to-day, but let’s never forget why we are all here in this room — to help the middle class and those working hard to join it.”

The prime minister said that vision applies not just for the rest of the year, nor even the rest of the majority Liberal mandate before the 2019 election, but for generations to come.

A senior government source said that inside the meeting, caucus was urged to think of the goals for the future of the country in terms of a ship, which is both leaking and headed in the wrong direction.

Patch the holes with quicker measures such as the new Canada Child Benefit — a reworked monthly payment to families that Trudeau said will lift some 300,000 children out of poverty — and then focus on changing direction through longer-term goals.

That includes efforts to reduce greenhouse gas emissions and combat climate change — a “daunting challenge,” Trudeau said in his speech — as well as spending on infrastructure and innovation they hope will have positive impacts on the country and its economy for years to come.

Defence Minister Harjit Sajjan said he did not want to confirm any analogies used behind the closed doors of the caucus meeting, but said he agrees with the potential the Canada Child Benefit has to level the playing field.

“As a former police officer, I’ve seen the issues when parents have a difficult time raising their children,” said Sajjan, who mentioned the link between poverty and gang involvement as one example.

The message served as the more uplifting side of the main theme out of the cabinet retreat that took place earlier this week in Sudbury, Ont., which was that the second year of government will involve tough choices and coming to terms with the fact that they can’t please everyone all of the time.

Thursday’s long-game reminder from Trudeau also came after a rough few days of negative attention over expensive mistakes by some rookie ministers, such as the thousands of dollars Health Minister Jane Philpott spent to be chauffeured around in a luxury vehicle owned by a Liberal volunteer.

The caucus retreat is a way for Liberal MPs to reconnect after the summer away from Ottawa, but also to get updates from cabinet ministers on their legislative plans for the fall on everything from electoral reform and UN peacekeeping to a price on carbon and national security.

There were also discussions with newly appointed government House leader Bardish Chagger about proceeding with an ambitious legislative agenda without things once again devolving into the bitter partisanship that tainted the spring session.

Backbench MPs, who did not get to take part in the bonding experience of sharing dormitory rooms at Laurentian University at the cabinet retreat in Sudbury, are also getting face time with ministers to air any grievances and make their pitches for pet projects and policies.

The Quebec caucus, for example, was looking for an update on what to do about Bombardier — Liberal MPs from the province are keen to see the federal government step up with a requested $1-billion bailout.

Economic Development Minister Navdeep Bains, who said he could not tell whether talks would end next month or next year, confirmed Ottawa is still insisting the Montreal-based company its support would mean keeping jobs and research and development resources in Canada.

“This is the healthy discussion we’re having,” Bains said when asked whether this had become a sticking point.

In last year’s federal election, Liberal MP Denis Lemieux took the riding of Chicoutimi-Le Fjord, the first time someone from the party had won the seat since 2000.

Trudeau, who joined his colleagues on a boat ride and plans to go kayaking Friday afternoon, said holding the summer caucus retreat in the region 210 kilometres north of Quebec City was meant to demonstrate that the party has grown nationwide.

Dairy farmers, however, showed up with their tractors outside the hotel Thursday morning to protest the Liberal government not stopping imports of U.S. diafiltered milk proteins.