Trudeau dogged by questions on vacation at Aga Khan's island 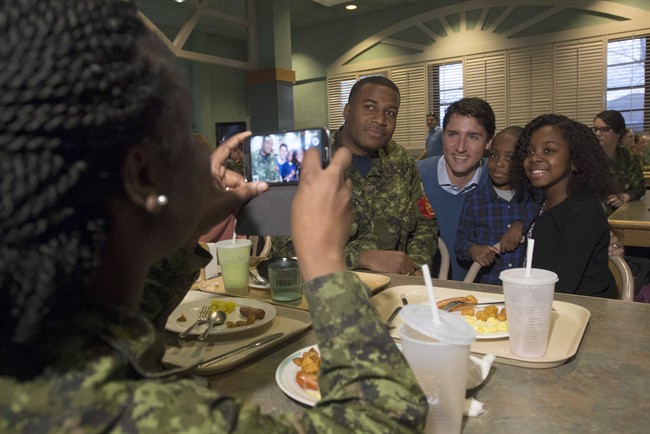 Prime Minister Justin Trudeau poses for a photo with a military family as he visits a base mess hall during breakfast at CFB Trenton in Trenton, Ont. Friday January 13, 2017. THE CANADIAN PRESS/Adrian Wyld

PETERBOROUGH, Ont. – Justin Trudeau’s campaign-style outreach tour offered no respite Friday from questions about his family vacation with the Aga Khan — nor the priorities of ordinary Canadians, from soaring hydro bills to carbon taxes to Donald Trump.

Trudeau continued to defend himself from critics assailing his use of a private helicopter belonging to the wealthy spiritual leader, even though the federal Conflict of Interest Act expressly forbids such perks.

“Prime minister is not a nine-to-five job,” Trudeau told a news conference in Peterborough, Ont., presumably a reference to the fact that his behaviour remains subject to public scrutiny even during what he calls a “private family vacation.”

“I’m prime minister every minute of every day … that’s part of the job and I fully accept and embrace it.”

Canadians expect to have confidence in their government, he added, repeating his commitment to co-operate with the federal ethics commissioner regarding the trip.

But his controversial family holiday at the Aga Khan’s ultra-private Bahamian island appeared far from the minds of the ordinary Canadians who packed a town hall in Peterborough to give the prime minister a window into their world.

Kathy Katula, 54, from Buckhorn, Ont., gave Trudeau a piece of her mind about her soaring hydro bill — a phenomenon that’s largely an Ontario government problem — and the prime minister’s plan to force the provinces to impose a carbon tax.

“I feel like you have failed me and I am asking you here today to fix that,” an emotional Katula, a single mother, told Trudeau.

“My heat and hydro cost me more than my mortgage.”

Not everyone agrees with the federal government’s decision to impose carbon pricing in Canada, Trudeau acknowledged, saying it will be up to the provinces to ensure the measures are not onerous to those struggling to make ends meet.

“It will be up to the government of Ontario to ensure that you are not penalized, folks like you,” he said. “I am trusting they will do that responsibly and not penalize you further.”

Later, Katula appeared willing to give the prime minister a pass on the Aga Khan controversy.

“Yes, I’m angry about it, but my focus today is, why am I suffering?” she said in an interview.

The prime minister began his day with a jog with troops at CFB Trenton, followed by breakfast and small talk with soldiers in the mess hall.

Later, he stopped by a restaurant brimming with locals in Bewdley, Ont., and visited a Toronto Raptors training facility to meet youth from La Loche, a Saskatchewan community still reeling from a school shooting last year that killed four and injured seven others.

But looming over the tour has been the rich-and-famous flavour of the hospitality Trudeau and his family enjoyed at the hands of the Aga Khan, a longtime family friend who also happens to be the spiritual leader of the world’s 15 million Ismaili Muslims.

After taking a government jet to Nassau, the Trudeau entourage, which included a Liberal MP and the party’s president, travelled on a private helicopter in order to get to their ultimate destination, a private Bahamian island.

Both the Conflict of Interest Act and Trudeau’s own ethics guidelines bar the use of sponsored travel in private aircraft, allowing only for exceptional circumstances related to the job of prime minister and only with the prior approval of the ethics commissioner.

Trudeau has said he will discuss the matter with conflict of interest and ethics commissioner Mary Dawson “and answer any questions she may have.”

Both complaints question whether it is OK for the prime minister to accept the hospitality of someone whose foundation receives funds from the Canadian government.

The Aga Khan Foundation has been the beneficiary of tens of millions of dollars in government contributions to international development projects.

The Aga Khan himself, while not a registered lobbyist, is a noted philanthropist and the hereditary spiritual leader of the world’s approximately 15 million Ismaili Muslims.

In 2009, then-prime minister Stephen Harper made him an honorary citizen of Canada.