Trudeau, Trump hold roundtable talks on women in the workforce 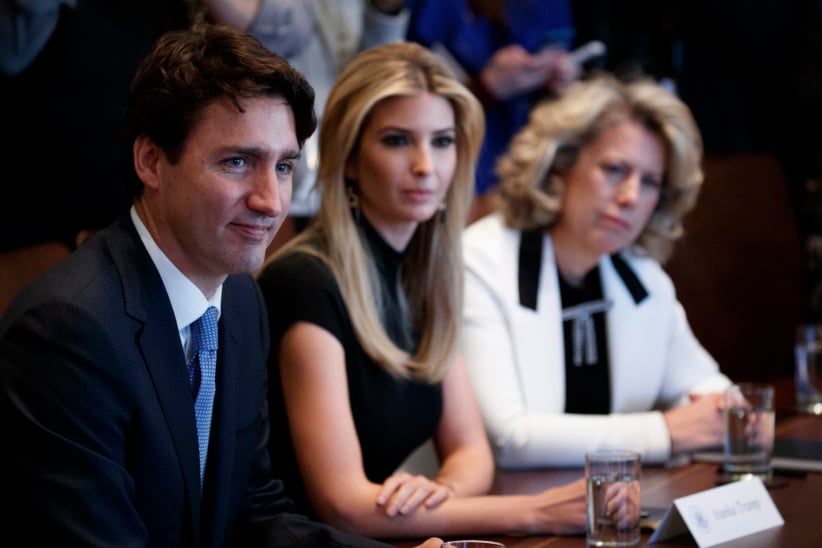 OTTAWA – President Donald Trump borrowed some of self-avowed feminist Justin Trudeau’s political credibility with women Monday as he and the prime minister pledged to give a boost to powerful women on both sides of the Canada-U.S. border.

The Canada-United States Council for Advancement of Women Entrepreneurs and Business Leaders is a joint initiative to help women-owned businesses contribute to economic growth, competitiveness and the integration of the two economies.

But the measure — along with roundtable talks at the White House between Trudeau, Trump, his daughter Ivanka and prominent female business leaders — was clearly meant to help broach a thorny issue for Trump while building political capital.

“We discussed how to secure everything that we know the full power of women can do better than anybody else,” Trump told a joint news conference Monday in Washington, D.C., after meeting face-to-face with Trudeau for the first time.

The Prime Minister’s Office said the council would recommend ways to remove barriers to competitiveness for women entrepreneurs, and tackle issues affecting women in the workforce, including those in senior leadership positions.

“In order to create economic growth and lots of very good well-paying jobs, we must ensure that our economy is a place where women can work and thrive,” Trump said before the roundtable talks got underway.

“We need policies that help keep women in the workforce and to address the unique barriers faced by female entrepreneurs — and they are unique.”

Trump opened the meeting in typical style, saying he had employed several “tremendous” women as executives in his companies prior to becoming president.

Trudeau said he has heard similar complaints about such barriers, as well as ideas for potential solutions, from the female business leaders he has met on his travels.

“Whenever I sit down with a woman executive, I know that she has had to overcome significant barriers that exist and therefore is likely to have greater insight into how to ease those barriers for others, but also be a formidable contributor to the success of business and our economy,” he said.

“For me, it’s not just about doing the right thing, but understanding that women in leadership can be a very powerful leverage for success for business, for communities and for our entire economy.”

The idea for the roundtable came from Katie Telford, chief of staff to the prime minister, said one senior Liberal government source — another sign that it was designed to allow Trudeau and Trump to engage on women’s issues in a diplomatic way.

Once the idea was floated, Dina Powell, an assistant to Trump and his senior counsellor on economic initiatives, as well as Jared Kushner — a senior adviser to the president who also happens to be Trump’s son-in-law — got involved in making it happen.

Ivanka Trump, who is married to Kushner and was a champion of child care and maternity leave during her father’s presidential campaign, was also at the meeting, seated prominently next to the prime minister.

She said she looked forward to hearing insights on how to “level the playing field” for women in business.

“It’s a smart thing if Canada proposed this,” said Nelson Wiseman, a professor of politics at the University of Toronto.

“It takes attention off of NAFTA. And from Trump’s point of view, it contributes to softening Trump’s image, and he’s got a problem with women.”

The council will be made up of 10 female executives — half from Canadian companies and the other half from American companies.

The Canadian members include CEOs Annette Verschuren, of NRStor Inc., Dawn Farrell of TransAlta Corp., Linda Hasenfratz of Linamar Corp. and Tina Lee of T&T Supermarket Inc., as well as Monique Leroux, chair of the board of directors from Investissement Quebec, are also around the table.

Those on the American side are CEOs Elyse Allan, of GE Canada, Tamara Lundgren, of Schnitzer Steel Industries, Inc., Julie Sweet, from Accenture, Mary T. Barra of General Motors and Indra Nooyi of PepsiCo.

Most of them were at the meeting.