OTTAWA – One of Prime Minister Justin Trudeau’s senior officials took Fox News to task for describing the alleged gunman in the Quebec City shooting as Moroccan.

Kate Purchase, director of communications in the Prime Minister’s Office, pointed out the “false and misleading language” in a letter to Fox News Channel co-president Bill Shine that was released to the media Tuesday.

“Canada is an open, welcoming country that stands by its citizens,” Purchase wrote in the letter, which goes well beyond simply asking for a correction.

“We are a nation of millions of immigrants and refugees, of hundreds of cultures, languages and religions bound by one, unwavering, unshakable belief: we are stronger not in spite of our differences, but because of them.

“These tweets by Fox News dishonour the memory of the six victims and their families by spreading misinformation, playing identity politics, and perpetuating fear and division within our communities.”

Refet Kaplan, the managing director for FoxNews.com, issued an apology.

“FoxNews.com initially corrected the misreported information with a tweet and an update to the story on Monday,” Kaplan wrote a statement sent by email Tuesday evening.

“The earlier tweets have now been deleted. We regret the error.” 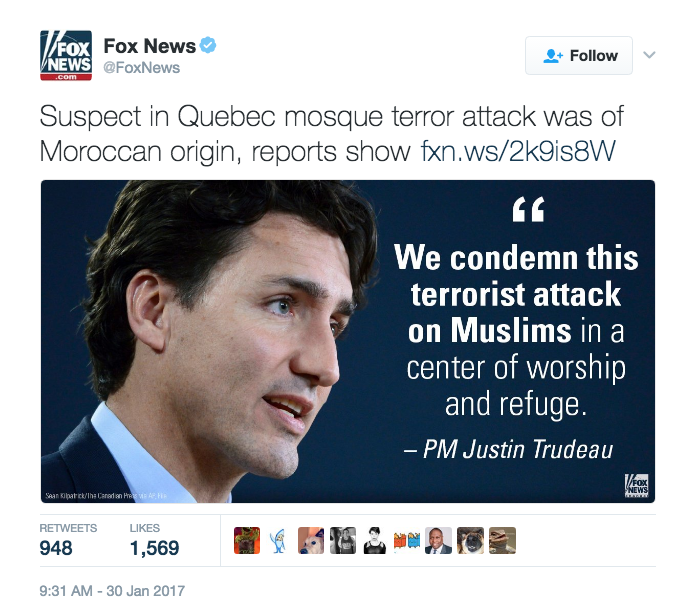 A tweet from Fox News containing inaccurate information. The Prime Minister’s Office has asked that it be retracted or updated.

The tweet had appeared to be a consequence of early police reports in the wake of the shooting that said two suspects had been taken into custody. Later reports said one of those people was not a suspect, but a witness.

Purchase noted the tweet appeared early Monday afternoon, but remained online even after police had confirmed that the sole suspect, Alexandre Bissonnette, is a 27-year-old man of French-Canadian origin.

Before it was deleted Tuesday evening, the tweet had been retweeted more than 900 times, and liked about 1,600 times. It also had about 7,200 replies, many of them pointing out the inaccuracy and calling for a correction.

A subsequent tweet posted Monday evening noting the second person in custody had been cleared was retweeted only 72 times and had 162 likes.

The PMO’s interest in the earlier, incorrect tweet may have a lot to do with the fact that it also includes an image of Trudeau and his quote from the night of the shooting: “We condemn this terrorist attack on Muslims in a centre of worship and refuge.”

It also links to a story published on the Fox News website that includes the updated information and notes that the earlier detail about a second suspect came from other media reports.

The PMO would not comment further on the letter, but confirmed it did not send any similar letters to other media outlets that had reported – and since corrected or otherwise updated – similar earlier misinformation.

As of Tuesday evening, Reuters UK had a post on Twitter from Monday afternoon describing two suspects – one as French-Canadian and one as Moroccan.

Meanwhile, a tweet from Montreal newspaper La Presse that also described one of the suspects as Moroccan was not deleted until sometime Tuesday evening. That one had been retweeted more than 500 times and liked nearly 300 times.

Purchase ended her letter by asking Fox News to either retract or update the tweet, but not before delivering a broader message that was likely intended for an audience much bigger than its named recipient.

“We need to remain focused on keeping our communities safe and united instead of trying to build walls and scapegoat communities,” she wrote.

Nor was the phrase about building walls the only veiled reference to U.S. President Donald Trump and his controversial comments and policies on immigration.

“Ramping up fear and closing our borders is not a solution,” Purchase wrote. “It distracts from the real issues that affect people’s day-to-day life.”