Friday's speech weighed in at just 1,700 words. But there's a lot of marching in these marching orders. 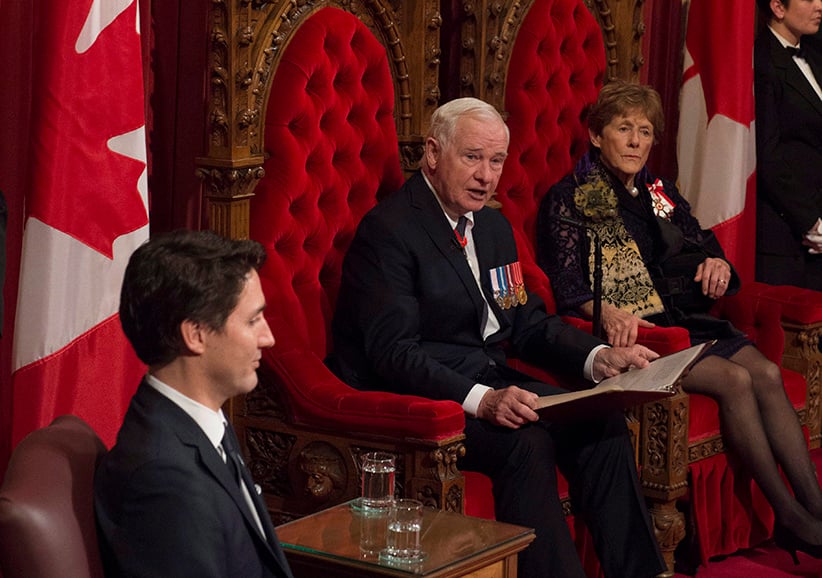 I never tire of the optics of Speeches from the Throne. Not the content of each speech, or not only that, but simply the geometry of the event. The feng shui of it. The Senators sit in their plushy red-lined digs and wait while servants run down the hall to fetch the rabble—the ordinary members of Parliament, elected by the grimy unwashed.

Trudging back down the hallway, MPs are permitted to stand at the door of the Upper Chamber but not to enter it. They listen, kids outside a candy shop, while the Queen’s man in Ottawa reads out their orders for the next few years. And then the Governor General tops it all off by handing these rowdy interlopers the bill. “Members of the House of Commons, you will be asked to appropriate the funds required to carry out the services and expenditures authorized by Parliament,” David Johnson said at the end of Friday’s Speech from the Throne.

They will, in point of fact, be asked to do rather more than that. Much has already been made of how short Friday’s speech was: 1,700 words, barely one-quarter as long as the last speech Johnson delivered at Stephen Harper’s behest in 2013. At the time I called that speech “a breathtaking spout of free-associating bloviation.” This one is a haiku by comparison, shorter by 700 words than any Throne Speech I have ever heard in my approximately 147 years on Parliament Hill.

But word length can be misleading. Ottawa is dedicated to the principle that you can speak forever without saying anything. Similarly, or inversely, or something, you can fit an epoch into a really short Throne Speech. There’s a lot of marching in these marching orders. They began with the wholly unsurprising news that “The Government will, as an immediate priority, deliver a tax cut for the middle class.” But the rest followed at a racehorse tempo: “the new National Child Benefit;” “significant” investments in infrastructure; enhanced pensions and Employment Insurance; easier access to post-secondary education; and a promise to “begin” work on a new health accord with provinces.

That’s just the first page of commitments from the new government. The second page promises electoral reform (“2015 will be the last federal election conducted under the first-past-the-post voting system”), Senate reform and House of Commons reform. After that came a price on carbon, a new “nation-to-nation” relationship with First Nations, 25,000 Syrian refugees by February, and legal pot.

None of this was new. That’s by design. Trudeau’s public statements, his written record to date, and the anecdotal evidence I’ve gleaned from people who work with him all suggest he wants to go back to the voters in 2019 with a concrete record of achievement, and he wants that record to resemble his promises in 2015. Repetition and persistence, he hopes, will help his government build that record.

Any single item on Trudeau’s list, or at least on my barely pared-down précis above, could wreck his government if botched. If the health accord negotiations lead to federal-provincial strife, or legalized marijuana turns into a lurid string of reefer-madness headlines about stoner kids, or the Syrian target isn’t met or if it’s exceeded or whatever, that’s a high-profile failure and a time sink that will distract Trudeau’s attention from everything else he’s trying to get done.

The tempo will be brisk. The refugee deadline is in February. I’m told to expect a second meeting of first ministers in March; a budget later that month; and a national plan for combating climate change for the beginning of April. By sometime later this spring, Trudeau will have filled at least the 22 current Senate vacancies under his new system with its theoretically non-partisan advisory committee, and if they’re duds, everyone will know it.

Even in a short speech, it was possible to note telling silences and lacunae. The Globe columnist Adam Radwanski pointed out, within minutes after the speech concluded, that it does not promise to implement “all” of the Truth and Reconciliation Commission recommendations. Tom Mulcair offered one-stop shopping for anyone wondering what else wasn’t in the speech: nothing on child care, nothing on at-the-door mail delivery. Many noticed there is no language about when the federal budget will be balanced again. Maybe never!

But Trudeau has loaded up his plate for his first years as prime minister. His opponents argued, in effect, that he wanted this job to be someone, not to do something. He is eager to prove them wrong. Every opportunity to succeed is an opportunity to fail, so it should be a fun ride.

Related: The Throne Speech is over. Now what?