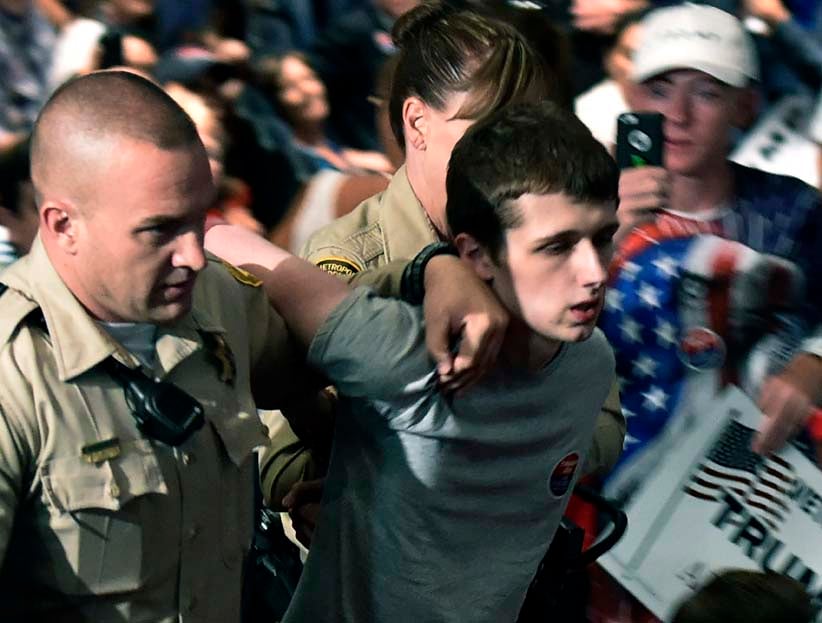 Standing before a judge in orange jail clothes with the word “detainee” across his back, Michael Steven Sandford acknowledged that he has been treated in the past for mental illness.

Court documents say Sandford previously told a federal agent that he drove from California to Las Vegas with a plan to kill Trump.

“I plead guilty, your honour,” Sandford told U.S. District Judge James Mahan when asked for his plea to being an illegal alien in possession of a firearm and disrupting an official function.

“I tried to take a gun from a policeman to shoot someone with, and I’m pleading guilty,” he said.

Sandford didn’t get the gun before he was arrested, and no shots were fired.

The judge said he was satisfied that Sandford was fit to enter the plea, even though the defendant said he had taken the anti-psychotic medication risperidone.

Sentencing was set for Dec. 13 and Sandford was ordered to remain in federal custody.

Under terms of his plea agreement, Sandford could face between 18 and 27 months in a U.S. prison for his two felony convictions. He will get credit for time served, accepting responsibility for the crime and avoiding trial, which had been set to start Oct. 3. He won’t be able to appeal.

Sandford could have faced up to 20 years in prison if convicted of both charges at a trial, and up to 30 years on the three charges he initially faced.

One charge of being an illegal alien knowingly in possession of a firearm will be dropped, prosecutor Nicholas Dickinson said.

Sandford is “almost certain” to be deported and banned from returning to the U.S., according to the plea agreement in which he acknowledges he overstayed his tourist visa and was in the U.S. illegally for almost 10 months at the time of his arrest.

Sanford’s pleas came after he met in custody last week with his mother, Lynne Sandford of Dorking, England, and a lawyer who arrived with her from London.

Chahal said earlier that a psychiatrist she enlisted to review the case determined that Sandford was delusional at the time of the attempted attack. Sandford also suffers seizures, obsession-compulsion, anxiety and autism spectrum disorders, Chahal said.

“Michael was not in control at the time of the events and needs help,” the attorney said in an email to The Associated Press before the hearing. “He is desperate to return to the U.K. to be near his family as he has no ties with the U.S.A.”

Court documents say Sandford acknowledged telling the Las Vegas police officer that he wanted a Trump autograph and then grabbing for the officer’s gun with both hands.

Sandford told a federal agent that he arrived in Las Vegas two days before the campaign rally, rented a 9mm pistol and fired 20 shots at a paper target at a Las Vegas gun range the day before Trump’s appearance, according to court documents.

Sandford told the agent it was the first time he had ever fired a gun.

It wasn’t clear if Trump recognized a threat before officers escorted Sandford out of the auditorium. But the candidate, now the Republican presidential nominee, noticed the commotion.

“We love you police. Thank you. Thank you, officers,” Trump said as Sandford was ushered out of the auditorium.

“The result was that no one was injured,” Bogden said.