By Jonathan Lemire And Zeke Miller, The Associated Press February 3, 2018 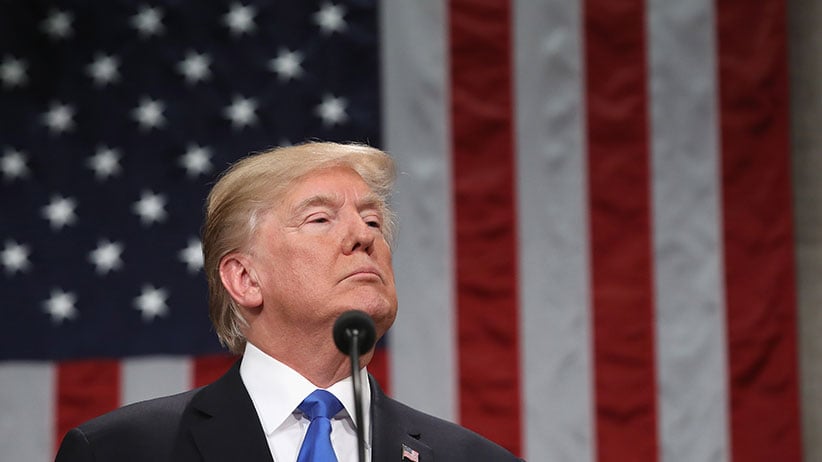 U.S. President Donald Trump delivers the State of the Union address in the chamber of the U.S. House of Representatives on Jan. 30, 2018 in Washington, D.C. (Photo by Win McNamee/Getty Images)

WASHINGTON — Even before he’d read the memo, President Donald Trump seized on what it could mean.

The president first learned of the House Intelligence Committee document last month from some Republican allies in Congress and he watched it take hold in the conservative media, including on some of his favourite Fox News programs, according to seven White House officials and outside advisers.

The classified memo sent to the Oval Office by the committee’s majority Republicans asserted that the FBI and Justice Department abused their surveillance powers to monitor the communications of a onetime Trump campaign associate. Trump told confidants in recent days that he believed the memo would validate his concerns that the “deep state” — an alleged shadowy network of powerful entrenched federal and military interests — had conspired to undermine the legitimacy of his presidency, according to one outside adviser.

That adviser and the others weren’t authorized to publicly discuss private conversation and spoke on condition of anonymity.

Trump’s decision to authorize the memo’s public disclosure was extraordinary, yet part of a recent pattern. Like few of his predecessors, Trump has delivered repeated broadsides against intelligence and law enforcement agencies, working in tandem with some conservatives to lay the groundwork to either dismiss or discredit special counsel Robert Mueller, who is leading the Russia investigation.

“This memo totally vindicates ‘Trump’ in probe,” the president tweeted Saturday from Florida, where he was spending the weekend. “But the Russian Witch Hunt goes on and on. Their (sic) was no Collusion and there was no Obstruction (the word now used because, after one year of looking endlessly and finding NOTHING, collusion is dead). This is an American disgrace!”

READ: The presidential masquerade of Donald Trump’s State of the Union speech

Trump had dismissed forceful pleas from the FBI director, Christopher Wray, and the second-ranking Justice Department official, Rod Rosenstein, to keep the memo under wraps. They said the four-page document was inaccurate and lacked critical context, and they made their views known in a remarkable public statement objecting to its release. Democrats said the memo, which disclosed material about one of the most tightly held national security processes, selectively used Republican talking points in an effort to smear law enforcement.

Trump, however, was undeterred.

Early last week, aides briefed him on the never-before-used-process that the House would use to release the classified memo. Lawyers at the White House and Capitol Hill worried about making dangerous missteps.

Trump told allies he believed the memo would reinforce his belief that accusations of collusion between his 2016 campaign and Russian officials were false and part of the conspiracy to discredit his victory. And the president signalled that he would approve the memo’s public disclosure if the House committee voted to pursue that course.

Several aides cautioned that the memo did not contain convincing evidence of a conspiracy, while others urged him to black out sections on intelligence-gathering methods, according to a White House official. Other advisers, inside and outside the West Wing, questioned why his administration had allowed the memo to become the dominant talking point during the week when he gave his first State of the Union address, overshadowing the well-received address.

But those worries, as well as fears that the disclosure could lead to retaliatory leaks from the Justice Department, did not hold sway in the Oval Office. Trump made clear to aides he was intent on seeing the memo released as soon as possible.

White House officials with concerns resigned themselves to the memo’s release. Trump put his chief of staff, John Kelly, in charge of making that happen, and Kelly called Justice Department officials multiple times to upbraid them for criticizing the likely disclosure.

Trump’s counsel, meanwhile, took issue with the House process. Don McGhan believed that if the president only allowed the memo to go out, rather than declassify it, that would set a dangerous precedent and curtail executive powers, according to a White House official.

A final decision to authorize the release, without any part blacked out, came Thursday, a day before the document was sent back to the House for publication. While many in Congress, including House Speaker Paul Ryan, R-Wis., denied that the release undermined the FBI or Mueller’s investigation, Trump seemed to acknowledge that the memo was explicitly political.

“The top Leadership and Investigators of the FBI and the Justice Department have politicized the sacred investigative process in favour of Democrats and against Republicans — something which would have been unthinkable just a short time ago,” the president tweeted on Friday.

Trump would not say on Friday whether the memo made him more likely or not to fire Rosenstein.

READ: The most dangerous thing Donald Trump has done yet

“You figure that one out,” Trump told reporters.

Later, two White House officials said Trump was not considering parting ways with Rosenstein, at least for the moment. But the memo’s release and Trump’s penchant for keeping Justice Department officials on their toes were just the latest signs that the president intends to keep the agency on a short leash.

Trump first asked Comey for loyalty before firing him. He repeatedly berated Sessions, publicly and privately, after the attorney general’s decision to withdraw from the Russia investigation, and railed about what he perceived as insufficient loyalty while urging the Justice Department to reopen its investigation into Hillary Clinton’s emails. He reportedly asked the FBI’s No. 2 leader, Andrew McCabe, which presidential candidate McCabe voted for in 2016 and targeted the deputy director for attack in the weeks before McCabe announced a sudden departure from the bureau.

Trump also has taken his cues from conservative media and latched onto to a number of stories — including anti-Trump text messages by FBI agents — to distract from the Russia investigation and call into question the integrity of Mueller’s work.

Sessions, eager to return to Trump’s good graces, seemed to tacitly agree with his boss’ criticisms of the Justice Department. “I have great confidence in the men and women of this department. But no department is perfect,” Sessions said.