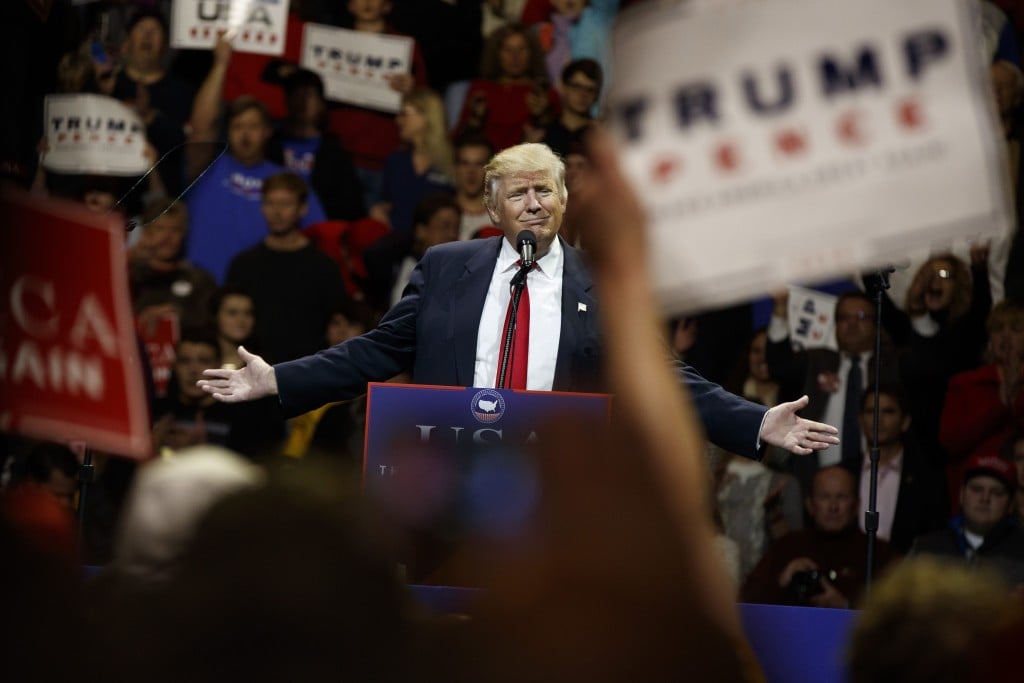 CINCINNATI – Donald Trump returned to his campaign roots Thursday in his first major public appearance since Election Day, resembling the pugnacious, brawling campaigner more than the traditional president-to-be as he held court in front of thousands of adoring fans – and even announced a Cabinet pick from the stage.

Trump’s first stop on this “Thank you” tour to salute his supporters was in Ohio and, ever the showman, he made the surprise announcement that he will be offering the post of Defence Secretary to retired Marine Corps Gen. James Mattis. Trump said he was supposed to unveil that Monday, so he jokingly warned the Cincinnati crowd to “not tell anyone.”

The raucous rallies during the Trump campaign road show often had the feel of a rock concert, and Thursday night in Cincinnati had all the hallmarks of a reunion tour: Trump took a veiled swipe at fellow Republicans. He remembered his general election foe by joking, “We had fun fighting Hillary, didn’t we?” He boasted about size of his victory and repeatedly bashed the media. Protesters briefly interrupted the proceedings. And the crowd chanted “Build the Wall” and “Lock Her Up.”

The president-elect had eased up on those campaign promises recently, suggesting the U.S.-Mexico border wall could be part-fence and indicating no willingness to pursue criminal charges against Democratic opponent Hillary Clinton.

Perhaps befitting an encore presentation, the downtown arena that Trump packed in October – drawing a crowd that was one of the loudest of the campaign – was only about half-full Thursday night. But the thousands who were there cheered Trump as he declared to restore American to greatness, saying, “Now is not the time to downsize our dreams.”

“Never again will anyone’s interests come before the interests of the American people. It’s not going to happen,” Trump thundered. “The old rules no longer apply. Anything we want for our country is now possible.”

Trump did nothing to downplay expectations before he takes office, declaring that “America will start winning again, big league.” Much like he did during the stretch run of the campaign, he read from teleprompters, but he was bombastic as ever, spending more than a dozen minutes bragging about his victory before outlining his economic plan.

He boasted about his wins in Midwest states that normally vote Democratic, declaring he didn’t just “break the blue wall, we shattered it.” He veered off-script to make fun of a protester, saying she was being ejected from the arena so “she could go back to Mommy.” He repeated his recent threat that, despite constitutional protections, “if people burn the American flag, there should be consequences.” And he repeated many of his signature campaign promises, including a pledge to “construct a great wall at the border.”

And he stunned his own aides when he announced the Mattis pick from the stage. Mattis, nicknamed “Mad Dog,” is considered one of the foremost strategic thinkers of his generation but to gain confirmation as Pentagon chief, he would need Congress to waive a requirement that a defence secretary be a civilian for at least seven years before taking up the post.

Mattis retired as chief of U.S. Central Command in 2013 after serving more than four decades in the Marine Corps. There is no sense of strong opposition to his nomination in Congress.

Trump, who has long spoken of feeding off the energy of his raucous crowds, first floated the idea of a victory tour just days after winning the election but has instead prioritized filling Cabinet positions. He is also expected to hold rallies in Pennsylvania, Florida, North Carolina and Michigan in the coming weeks, though details have yet to be announced. His supporters were thrilled that he had hit the road again.

“That he wants to do this, to take time out of his schedule to fly out here and personally thank the people … shows what kind of man he is,” said Josh Kanowitz, 43. “He’s one of us.”

But while Kanowitz largely praised Trump’s initial moves as president-elect, he visibly recoiled at the suggestion that he might pick Mitt Romney as secretary of tate, saying the 2012 Republican presidential nominee was “someone we should leave behind as we move forward.”

Others at the rally also expressed some hesitancy at Trump’s picks, with a few suggesting that choosing former Goldman Sachs partner Steven Mnuchin as Treasury Secretary was not exactly fulfilling Trump’s campaign promise to “Drain the Swamp” and eliminate corruption and elitism from Washington.

But most were inclined to give the president-elect the benefit of the doubt.

“He’s a businessman. He’ll pick talented people to work for him and then keep them in line,” said Jaime Bollmer, a 28-year-old teacher from Lockland, Ohio. “He’s a leader. That’s what leaders do.”

The rally in Cincinnati was the second stop on a victory lap through the Midwest on Thursday, coming hours after Trump saluted workers, owners and himself at a Carrier plant in Indiana. There he declared that a deal to keep a local plant open instead of moving operations to Mexico was only the first of many business victories to come.

Some questions remain about the extent of the victory at Carrier, which announced this week that it will keep an Indianapolis plant open. In February, the heating and air conditioning company said it would shut the plant and send jobs to Mexico, and video of angry workers being informed about the decision soon went viral.

During the campaign, Trump had often pointed to the Indiana plant’s moving plans as a result of poor Obama administration policies, and he pledged to revive U.S. manufacturing. Officials said this week that Carrier had agreed to keep some 800 union jobs at the plant.

Seth Martin, a spokesman for Carrier, said Indiana offered the air conditioning and furnace manufacturer $7 million in tax incentives after negotiations with Trump’s team to keep some jobs in the state.