The U.S., Britain and France carried out co-ordinated strikes aimed at punishing the Assad government for a suspected poison gas attack against civilians 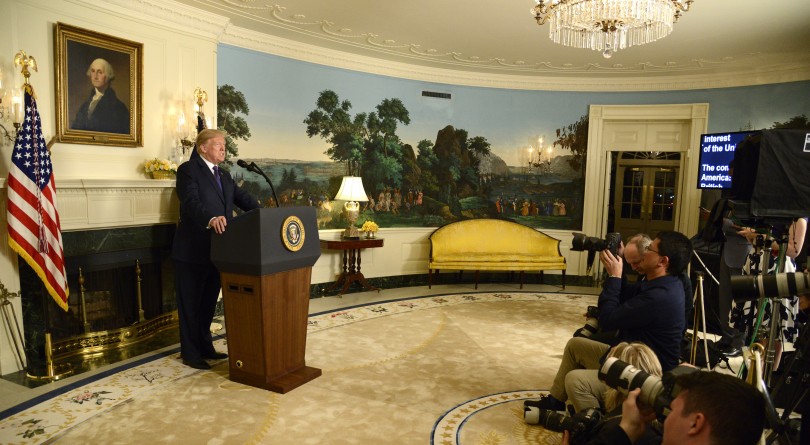 WASHINGTON, DC - APRIL 13: U.S. President Donald Trump makes remarks as he speaks to the nation, announcing military action against Syria for the recent apparent gas attack on its civilians, at the White House, on April 13, 2018, in Washington, DC. President Trump announced that a joint operation of "precision strikes" is underway in Syria with armed forces from the United Kingdom and France. (Photo by Mike Theiler - Pool/Getty Images)

WASHINGTON — Allied missiles struck at the heart of Syrian chemical weapons arsenal in a show of force and resolve aimed at punishing the Assad government for a suspected poison gas attack against civilians and deterring the possible future use of such banned weapons.

“A perfectly executed strike,” President Donald Trump tweeted Saturday in the aftermath of his second decision in two years to fire missiles against Syria. “Could not have had a better result. Mission Accomplished!”

A perfectly executed strike last night. Thank you to France and the United Kingdom for their wisdom and the power of their fine Military. Could not have had a better result. Mission Accomplished!

His choice of words recalled a similar claim associated with President George W. Bush following the U.S.-led invasion of Iraq. Bush addressed sailors aboard a ship in May 2003 alongside a “Mission Accomplished” banner, just weeks before it became apparent that Iraqis had organized an insurgency that tied down U.S. forces for years.

Syria’s chief allies, Russia and Iran, called the use of force by the United States, Britain and France a “military crime” and “act of aggression” with the potential to worsen a humanitarian crisis after years of civil war. The UN Security Council planned to meet later Saturday at Moscow’s request.

“Good souls will not be humiliated,” Syrian President Bashar Assad tweeted, while hundreds of Syrians gathered in Damascus, the capital, where they flashed victory signs and waved flags in scenes of defiance after the one-hour barrage launched Friday evening (early Saturday in Syria).

Before a planned Pentagon briefing Saturday, officials said Air Force B-1B strategic bombers launched JASSM “standoff” missiles for the first time in combat, evading Syrian air defences. In all, the Navy launched a little more than 100 Tomahawk cruise missiles from destroyers in the Mediterranean Sea. The officials, who provided details on condition of anonymity ahead of public announcements, said Syria’s air defences were ineffective.

Canada stood behind its allies after the strikes, with Prime Minister Justin Trudeau issuing a statement condemning the use of chemical weapons in eastern Ghouta on April 7.

Canada supports the decision by the United States, the United Kingdom and France to take action against the Assad regime’s ability to launch chemical weapons attacks. Statement: https://t.co/P5jkVJPriv

Trudeau went on to promise that Canada would “continue to work with our international partners to further investigate the use of chemical weapons in Syria,” adding: “Those responsible must be brought to justice.”

The Prime Minister is currently attending the Summit of the Americas in Peru, and was at a reception with U.S. Vice-President Mike Pence shortly before the news broke that the U.S. was preparing to launch strikes.

He had previously ruled out any Canadian involvement in a military strike, though a senior government official said Canada “was in the loop” before the attacks against Syria were launched.

A global chemical warfare watchdog group said its fact-finding mission would go as planned in Douma, where the apparent use of poison gas against civilians on April 7 that killed more than 40 people compelled the Western allies to launch their attack. Syria has denied the accusation.

Pentagon officials said the attacks, carried out by manned aircraft and from ships that launched cruise missiles from the Mediterranean Sea, targeted the heart of Assad’s programs to develop and produce chemical weapons. Russia’s military said Syrian air defence units downed 71 out of 103 cruise missiles fired by the allies.

Mattis said Friday there were no reports of U.S. losses in what he described as a heavy but carefully limited assault.

Trump said the U.S. was prepared to sustain economic, diplomatic and military pressure on Assad until he ends what Trump called a criminal pattern of killing his own people with internationally banned chemical weapons. That did not mean military strikes would continue; in fact, Gen. Joseph Dunford, chairman of the Joint Chiefs of Staff, said no additional attacks were currently planned.

Russian leader Vladimir Putin reaffirmed the Kremlin’s skepticism about the allies’ Douma claim, saying Russian military experts had found no trace of the attack. He criticized the U.S. and its allies for launching the strike without waiting for international inspectors to visit the area.

But British Prime Minister Theresa May cited reports she said indicated the Syrian government used a barrel bomb — large containers packed with fuel, explosives and scraps of metal — to deliver the chemicals. “No other group” could have carried out that attack, she said, adding that the allies’ use of force was “right and legal.”

Mattis disclosed that the U.S. had not yet confirmed that the Douma attack — the most recent suspected Syrian chemical weapons attack, on April 7 — included the use of sarin gas. He said at least one chemical was used — chlorine, which also has legitimate industrial uses and had not previously triggered a U.S. military response.

READ: Trump tweets missiles ‘will be coming’ to Syria

He said the targets selected by U.S., British and French officials were meant to minimize civilian casualties.

“This is difficult to do in a situation like this,” he said, in light of the volatility of chemical agents.

Defence officials from the countries involved in the attack gave differing accounts of how much warning was given to the Russians, Syria’s powerful ally.

Dunford said the U.S. did not co-ordinate targets with or notify the Russian government of the strikes, beyond normal airspace “de-confliction” communications. But the description from an ally put things differently. French Defence Minister Florence Parly said that “with our allies, we ensured that the Russians were warned ahead of time.”

READ: Understanding the effects of a chemical attack

At a Pentagon news conference alongside Mattis, and with British and French military officers beside them to emphasize allied unity, Dunford said the attacks targeted mainly three targets in western Syria.

Dunford said missiles first struck a scientific research centre in the Damascus area that he said was a centre of Syrian research, development, production and testing of chemical and biological warfare technology. The second target was a chemical weapons storage facility west of Homs. He said this was believed to be the main site of Syrian sarin and precursor chemical production equipment.

READ: How Israel became a defender of the Syrian people

British leader May said in London that the West had tried “every possible” diplomatic means to stop Assad from using chemical weapons. “But our efforts have been repeatedly thwarted” by Syria and Russia, she said.

“So there is no practicable alternative to the use of force to degrade and deter the use of chemical weapons by the Syrian regime,” May said. “This is not about intervening in a civil war. It is not about regime change.”

The Prime Minister @theresa_may has made a statement on Syria: https://t.co/bBfYyowUIo pic.twitter.com/QlTeFXmOkt

French President Emmanuel Macron said in a statement that a target of the strike was the Syrian government’s “clandestine chemical arsenal.”

Dozens of men, women and children were massacred using chemical weapons in Douma on Saturday, 7 April.
The red line has been crossed.
I have therefore ordered the French armed forces to intervene.https://t.co/mezFfV1Hh9 pic.twitter.com/7lVhMjhx9I

The Syrian government has repeatedly denied any use of banned weapons.

The decision to strike, after days of deliberations, marked Trump’s second order to attack Syria. He authorized a barrage of Tomahawk cruise missiles to hit a single Syrian airfield in April 2017 in retaliation for Assad’s use of sarin gas against civilians.

Trump chastised Syria’s two main allies, Russia and Iran, for their roles in supporting “murderous dictators,” and noted that Russian President Vladimir Putin had guaranteed a 2013 international agreement for Assad to get rid of all of his chemical weapons. He called on Moscow to change course and join the West in seeking a more responsible regime in Damascus.

In his nationwide address, Trump stressed that he has no interest in a longtime fight with Syria.

“As other nations step up their contributions, we look forward to the day when we can bring our warriors home,” Trump said. “And great warriors they are.”