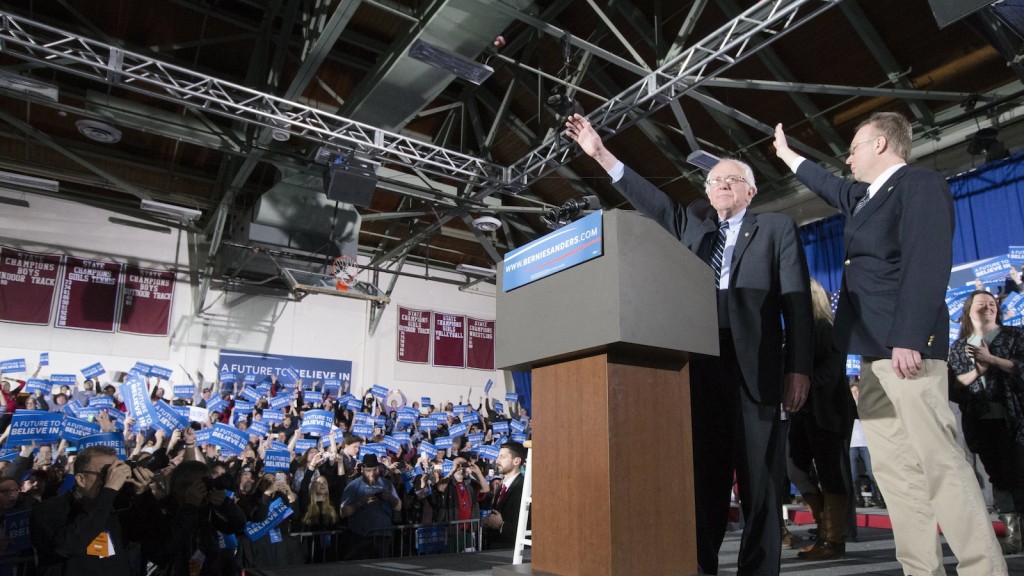 MANCHESTER, N.H. – Republican Donald Trump and Democrat Bernie Sanders were moving on Wednesday from commanding wins in the first-in-the-nation New Hampshire primary to more diverse states that will challenge their transformation from outsider candidates to their parties’ presidential nominees.

Tuesday’s outcomes would have been nearly unthinkable not long ago. Sanders, a self-described democratic socialist, easily beat Hillary Clinton, a former secretary of state and first lady once seen as the all-but-certain Democratic nominee. While Clinton remains the favourite in the national race, the win by the Vermont senator could be a springboard into a competitive, drawn-out campaign.

With more than 90 per cent of the vote counted, Sanders had 60 per cent to Clinton’s 38 per cent. He swept majorities of men, independents and young people. And Sanders and Clinton were evenly divided among women, a major setback for a candidate who aims to become the nation’s first female president.

For Trump, the brash real estate billionaire and television personality who has never held public office, the win was an important rebound after his loss to Texas Sen. Ted Cruz in last week’s Iowa caucuses, the first nominating contest. Trump has led national polls for months, and the New Hampshire victory proves he can win votes and gives credibility to his upstart populist candidacy.

Trump had 35 per cent, with Ohio Gov. John Kasich a distant second with 16 per cent.

“We are going to make America so great again,” Trump told a raucous crowd. “Maybe greater than ever before.”

For some Republican leaders, back-to-back victories by Trump and Cruz, an uncompromising conservative, add urgency to the need to coalesce around a more mainstream candidate. Tuesday’s vote did little to clarify who that might be.

Kasich, a more moderate Republican, poured nearly all of his campaign resources into the state. He pointed to his largely positive approach, saying, “Light overcame the darkness.”

Former Florida Gov. Jeb Bush and Florida Sen. Marco Rubio vied for third place along with Cruz, ensuring all would press on to the next contest – the Feb. 20 South Carolina primary. The state is a hotbed of conservative tea party groups and evangelical voters that will test Trump’s staying power.

New Jersey Gov. Chris Christie told supporters that instead of going to South Carolina, he’ll head home to “take a deep breath” and take stock of his struggling bid.

In her concession speech, Clinton echoed Sanders’ calls for taking on Wall Street banks and tackling income inequality. But she cast herself as more prepared to make good on her pledges.

“People have every right to be angry. But they’re also hungry, they’re hungry for solutions,” she said.

Clinton’s campaign argues she will perform better as the race heads to more racially diverse states, including Nevada and South Carolina. Both New Hampshire and Iowa are overwhelmingly white states that are far less diverse than the nation as a whole.

Nevada has been considered Clinton territory, in part because of her strong relationships to the Latino community and longtime Democrats in the state.

At stake Tuesday were less than 1 per cent of the delegates who, at party national conventions in July, will choose nominees to succeed Obama. But a strong showing in New Hampshire can give a candidate momentum ahead of state contests in coming weeks, including the March 1 “Super Tuesday” when 11 states vote.

Clinton remains ahead in the overall delegate count due to support from superdelegates – the party officials who can support the candidate of their choice at the convention. Overall, Clinton has amassed at least 392 delegates and Sanders at least 42; the magic number to clinch the nomination is 2,382.

There were only 23 delegates at stake in New Hampshire’s Republican primary, and they are awarded proportionally, based on the statewide vote. A candidate needs 1,237 delegates to win the nomination.