The age of 'extreme vetting' begins 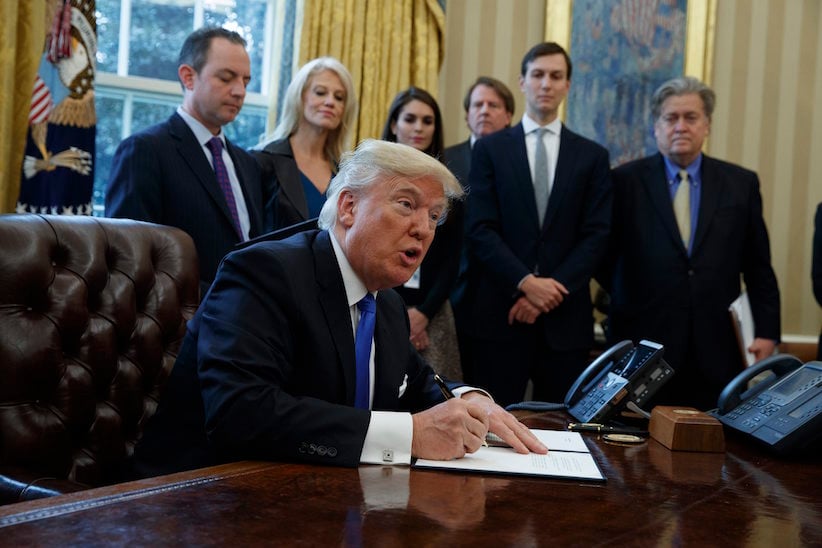 WASHINGTON – Setting a hard-line tone on national security, President Donald Trump on Friday ordered strict new screening for refugees to keep “radical Islamic terrorists” out of the United States and alternated tough talk with kind words in his diplomatic standoff with Mexico.

Trump travelled to the Pentagon where he joined Defence Secretary James Mattis for the signing of an executive action to bring sweeping changes to the nation’s refugee policies and put in motion his plans to build up the nation’s military.

However, it’s unclear from the law cited in the directive specifically which countries are affected. A draft of the order had designated seven predominantly Muslim countries: Iran, Iraq, Libya, Somalia, Sudan, Syria and Yemen. The White House did not immediately provide clarity on the affected countries.

Joined earlier in the day at the White House by British Prime Minister Theresa May, Trump reaffirmed the United States’ “special relationship” with Great Britain.

But he was also asked about more contentious issues, including his recent statements that torture “does work” in prying information out of terror suspects. Giving ground, he said his defence secretary’s opposition would override his own belief. Hours later he stood at the Pentagon as Mattis, the retired general, was sworn in as the military’s chief.

Trump was also pressed on whether he would revert back to Bush-era use of torture, in the news since The Associated Press and other news organizations obtained copies of a draft executive order signalling sweeping changes to U.S. interrogation and detention policy.

Trump said he would defer to the views of Mattis, who has questioned the effectiveness of such practices as waterboarding, which simulates drowning.

“He has stated publicly that he does not necessarily believe in torture or waterboarding, or however you want to define it. … I don’t necessarily agree. But I would tell you that he will override because I’m giving him that power. He’s an expert,” Trump said.

The draft order, which the White House said was not official, also would reverse Obama’s effort to close the military detention centre at Guantanamo Bay, Cuba – a place Trump has said he wants to fill up “with bad dudes.”

The draft also requests recommendations on whether the U.S. should reopen CIA detention facilities outside the United States. Critics said the clandestine sites have marred America’s image on the world stage

Trump held firm Friday on another controversy – trade and illegal immigration from Mexico. He told reporters at a joint news conference with May that he had a “very good call” with Mexican President Enrique Pena Nieto earlier in the day, but he reaffirmed his belief that Mexico has “outnegotiated and beat us to a pulp” on trade _ and that would change.

“We’re no longer going to be the country that doesn’t know what it’s doing,” he declared a day after the Mexican leader cancelled his visit to Washington in response to Trump’s plans to build a border wall and have Mexico pay for it.

While the refugee actions are aimed at thwarting terrorists, the border wall is more for keeping out immigrants trying to enter the U.S. for economic reasons _ though Trump has continually also raised concerns about criminals flowing north.

The flurry of national security moves and foreign policy outreach capped a hectic first week for Trump at the White House, giving Americans an initial look at how he intends to position the United States around the globe.

Trump, who met with the Joint Chiefs of Staff at the Pentagon, has the authority to determine how many refugees are accepted annually, and he can suspend the program at any time. Refugee processing was suspended in the immediate aftermath of the Sept. 11 attacks and restarted months later.

During the past budget year, the U.S. accepted 84,995 refugees, including 12,587 people from Syria. President Barack Obama had set the refugee limit for this budget year at 110,000.

Trump, according to the draft of the executive action, plans to cut that to 50,000. The draft order says that while the program is suspended, the U.S. may admit people on a case-by-case basis “when in the national interest” and the government will continue to process refugee requests from people claiming religious persecution, “provided that the religion … is a minority religion in the individual’s country.” That suggests it would allow the admission of Christians from Muslim-majority countries.

In an interview with CBN News, Trump said persecuted Christians would be given priority in applying for refugee status. “We are going to help them,” Trump said. “They’ve been horribly treated.”

RELATED: Trump calls for probe into his own unsubstantiated voter fraud claim

Applauded by some in his own party, Trump’s refugee action was strongly criticized by some Democrats.

“Tears are running down the cheeks of the Statue of Liberty tonight as a grand tradition of America, welcoming immigrants, that has existed since America was founded has been stomped upon,” said Senate Minority Leader Chuck Schumer of New York. “Taking in immigrants and refugees is not only humanitarian but has also boosted our economy and created jobs decade after decade. This is one of the most backward and nasty executive orders that the president has issued.”

Trump’s order was signed on Holocaust Remembrance Day, which brought to mind the global effort to help refugees during World War II and its aftermath.

On another international issue, Trump is expected on Saturday to speak by phone with Russian President Vladimir Putin. During the news conference with May, he was asked if he was considering lifting U.S. sanctions against Russia. But Trump was noncommittal, saying, “We’ll see what happens. As far as the sanctions, very early to be talking about that.”

Obama’s administration and the European Union slapped Moscow with sanctions for its annexation of Ukraine’s Crimean Peninsula and support for a pro-Russia insurgency in eastern Ukraine. Relations have plunged to post-Cold War lows over Ukraine, Putin’s backing of Syrian President Bashar Assad and allegations of Russian meddling in the U.S. elections.

May, for her part, said the United Kingdom supports continuing the sanctions for now.