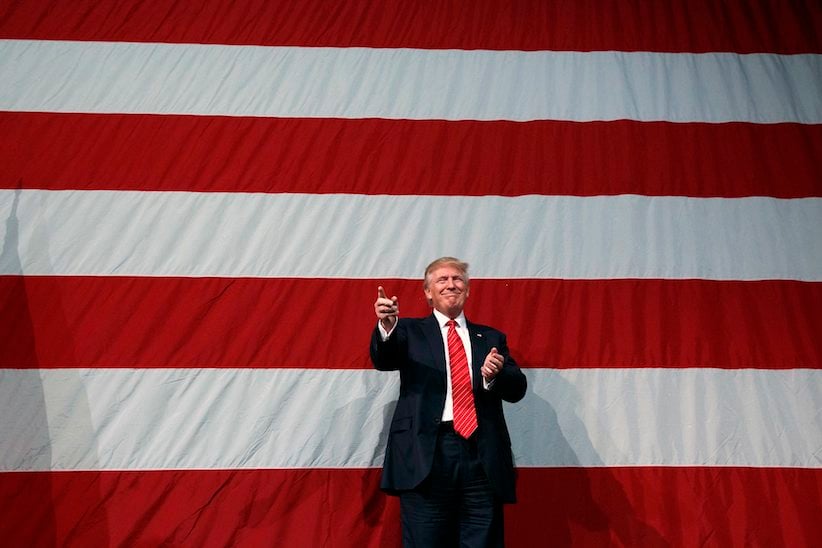 PALM BEACH, Fla. – The scramble to shape his administration underway, President-elect Donald Trump’s team has simultaneously begun turning its attention to raising tens of millions of dollars for festivities related to his Washington inauguration.

Trump, who vowed during the campaign to “drain the swamp” of special interests corrupting Washington, has set $1 million donation limits for corporations and no limits for individual donors, according to an official on the Presidential Inaugural Committee with direct knowledge of tentative fundraising plans. At the same time, Trump’s inaugural committee will not accept money from registered lobbyists, in line with his ban on hiring lobbyists for his nascent administration.

Barack Obama set stricter limits on donations for his first inauguration, in 2009, holding individual donors to $50,000 each and taking no money from corporations or labour unions, as well as none from lobbyists and some other groups. Plenty of corporate executives, though, gave individually and often at the maximum amount. And he opened the spigots for his 2013 inauguration, setting no limits on corporate or individual donations.

More: In Washington, D.C., the political swamp monsters prowl on

The new details, confirmed Thursday on the condition of anonymity because the official was not authorized to disclose private deliberations, came as Trump gathered with family at his Palm Beach estate Mar-a-Lago on Thanksgiving.

Trump’s team would not say exactly which family members joined him for dinner, although he arrived in Florida earlier in the week with his wife, Melania, and youngest son, 10-year-old Barron.

It was a working holiday of sorts for Trump, who suggested on Twitter that he was engaged in trying to prevent an Indiana air conditioning company from moving jobs to Mexico.

“I am working hard, even on Thanksgiving, trying to get Carrier A.C. Company to stay in the U.S.,” Trump tweeted. “MAKING PROGRESS – Will know soon!”

The company, which has announced plans to move 1,400 jobs to Mexico from Indiana in the coming years, confirmed Thursday it “has had discussions with the incoming administration,” but said there was “nothing to announce at this time.”

On the eve of the national holiday, the president-elect offered a prayer for unity after “a long and bruising” campaign season.

“Emotions are raw and tensions just don’t heal overnight,” Trump said in a video message on social media. He added, “It’s my prayer that on this Thanksgiving we begin to heal our divisions and move forward as one country strengthened by shared purpose and very, very common resolve.”

Related: The dawn of the strongman era is here

Unity has emerged as a common theme during Trump’s limited public appearances in the days since his stunning general election victory, which followed a campaign season in which he rained extraordinary personal attacks on his opponents in both parties, the media and his many Republican critics.

Unity would also be a theme for the incoming president’s Jan. 20 inauguration, the official said.

While Trump’s fundraising plans have not been completed, he is expected to raise significantly more than the $43 million Obama raised for his 2013 inauguration. Taxpayers cover the cost of official activities such as the swearing-in, but outside donations pay for the many related balls and parties.

Trump has focused most of his attention in the two weeks since his victory on building a White House team from scratch.

He injected the first signs of diversity into his Cabinet-to-be on Wednesday, tapping South Carolina Gov. Nikki Haley to serve as U.S. ambassador to the United Nations and charter school advocate Betsy DeVos to lead the Department of Education. They are the first women selected for top-level administration posts. And Haley, the daughter of Indian immigrants, would be his first minority selection after a string of announcements of white men.

Retired neurosurgeon Ben Carson on Wednesday said “an announcement is forthcoming” on his position, which would make him the first black choice _ possibly as secretary of housing and urban development. But he also suggested he’d be thinking about it over the Thanksgiving holiday.

Trump is also expected to select billionaire investor Wilbur Ross Jr. to lead the Commerce Department, a senior Trump adviser said on condition of anonymity because the adviser was not authorized to disclose internal deliberations. The 78-year-old Ross, who is white, is chairman and chief strategy officer of private-equity firm W.L. Ross & Co., which has specialized in buying failing companies.

Trump is spending the Thanksgiving holiday at Mar-a-Lago after a week of interviewing potential appointees in New York, punctuated by announcements of members of his national security team.

He is expected to stay in Florida through the weekend.