Ahead of a final election result, the former vice-president told supporters he's confident about Wisconsin and Michigan and expects to win Pennsylvania 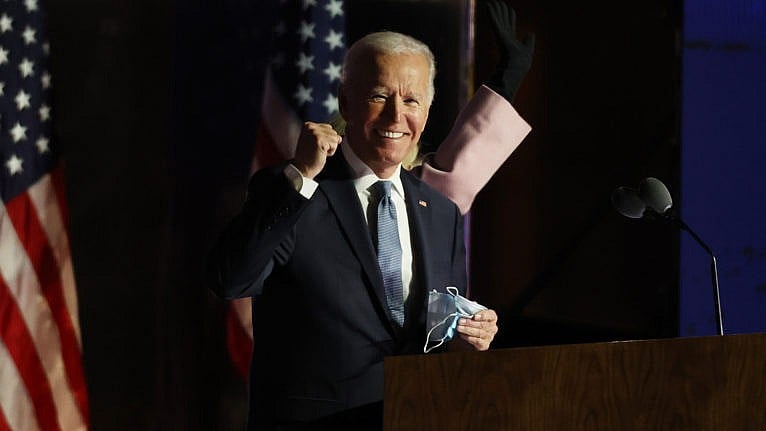 Joe Biden spoke to supporters in Delaware early Wednesday morning, when the election was still too close to be called. Here are his remarks:

Good evening! Your patience is commendable. We knew this was going to go long, but who knew we were going to go into maybe tomorrow morning, maybe even longer.

But look, we feel good about where we are, we really do. I’m here to tell you tonight, we believe we’re on track to win this election. We knew because of the unprecedented early vote and the mail-in vote, that it was going to take a while. We’re going to have to be patient until the hard work of tallying the votes is finished. And it ain’t over until every vote is counted, every ballot is counted.

But we’re feeling good, we’re feeling good about where we are. We believe, one of the nets suggested we’ve already won Arizona, but we’re confident about Arizona, that’s a turnaround. We also just called it for Minnesota. And we’re still in the game in Georgia, although that’s not one we expected. We’re feeling real good about Wisconsin and Michigan. And by the way, it’s going to take time to count the votes—we’re going to win Pennsylvania. I’ve been talking on the phone to Philly, Alleghany County, Scranton, and they’re really encouraged by the turnout and what they see.

Look, you know, we could know the results as early as tomorrow morning, but it may take a little longer. As I’ve said all along, it’s not my place or Donald Trump’s place to declare who’s won this election, that’s the decision of the American people. But I’m optimistic about this outcome.

And I want to thank every one of you who came out to vote in this election. And by the way, Chris Coons and the Democrats, congratulations here in Delaware. Hey, John, the gov, yeah, the whole team, man, you’ve done a great job. I’m grateful to the poll workers, to our volunteers, our canvassers, everyone who participated in this democratic process. And I’m grateful to all my supporters here in Delaware and all across the nation. Thank you, thank you, thank you.

And folks, you heard me say it before, every time I walked out of my grandpa’s house up in Scranton, he’d yell, “Joey, keep the faith!” And my grandma, when she was alive, would yell, “No Joey, spread it!”