U.S. Election 2020: The four states everyone is watching now 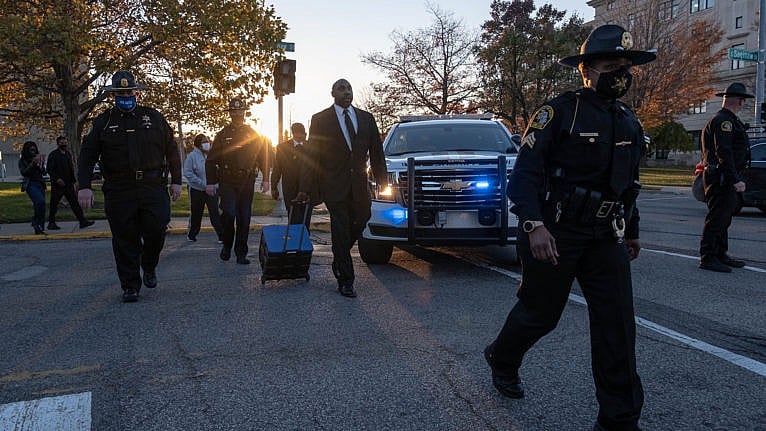 Officers from the sheriff's department in Flint, Mich. take absentee ballots filled out by people in pretrial custody for counting on Tuesday—just some of the votes being tallied that could determine the outcome of the U.S. election. (Seth Herald/AFP/Getty Images)

It was an election like no other thanks to COVID-19, and as the votes came in, it became clear that election night was just the beginning of the end of it. An unprecedented number of Americans voted by mail, a practice Democrats encouraged, and Republicans criticized—without evidence—as insecure and ripe for fraud. Some states reported mail-in and early votes first, but a handful of key battlegrounds were still counting them two and, in some cases, three days after the polls had closed.
With results neck and neck, officials warned it could take until the end of the week to decisively declare a winner. They were good on their word. And since Democrats were more likely to mail in their votes, the final tally seemed certain to look significantly different at the end of that process than it did at the beginning, when Trump held leads in several of them. Here’s a look at what’s going on in four key states.

Georgia! A key tossup state in a presidential election! This year is just full of surprises. The southern state hasn’t voted for a Democrat for president since 1992 and Trump opened up an early lead in it that appeared solid. But that lead slowly evaporated as mail-in ballots were counted on Thursday,  and early on Friday morning, after 99 per cent of ballots had been counted, Biden eclipsed Trump in the state with a narrow lead of just 917 votes. Georgia’s 2020 election experience has been rocky, with long lines and technical difficulties plaguing both voting and ballot counting. But with 16 electoral college votes, Georgia could be key to tipping the balance in favour of a winner. If he wins it, Biden would be only one vote shy of outright victory.

Pennsylvania is the big, fat prize of the rust belt, with 20 electoral college votes. And Trump polled better there than he did in other states in the region. But based on Biden’s standing early Friday, it would be enough to secure him an outright win. Trump’s initial nine-point lead had shrunk to just a half-point, or just over 18,200 votes, with 94 per cent of ballots counted. Voters have returned about 1.4 million absentee ballots in the state, but like Wisconsin and Michigan, election officials were legally prevented from counting them early. Data from the secretary of state suggest those absentee voters were overwhelmingly Democrats, and there too, Trump’s lead dwindled through Thursday, it looked poised to flip to blue. The state had said it expected to be able to report a final result by the end of the week.

The Democrats held this state for decades until Donald Trump won it by a narrow margin in 2016. Joe Biden has been consistently polling ahead of Trump there and posted a slim lead of 0.6 points with 97 per cent of ballots counted just before noon Wednesday. Officials in Wisconsin have their work cut out for them—the state’s 1,800-plus municipalities are responsible for conducting their own elections, rather than running them through a central office like most states. Clerks weren’t allowed to start counting ballots until polls opened on election day, but Gov. Tony Evers has said he hopes to be able to report full results by the end of the day Wednesday.

—Update as of 2:30 p.m. ET Wednesday: The Associated Press has called Wisconsin for Joe Biden. The Trump campaign says it will seek a recount under state law.

Michigan is a state of contradictions: A labour union stronghold and a bastion of American gun culture, with a Democrat for a governor and a far-right paramilitary group—one of several in the state—whose members concocted a thwarted plot to kidnap said governor because of her COVID-19 lockdown measures. Like Wisconsin, Michigan went solidly Democrat in presidential elections for decades until Trump came along, winning it by just over 10,000 votes in 2016. And like Wisconsin, Biden had been consistently polling ahead of Trump. As of noon Wednesday, Biden was leading by 0.7 points with 92 per cent of votes counted. Michigan election officials were only allowed to start counting ballots 10 hours before election day and the state expects to be one of the last states to report results, predicting it will be Friday or later. A possible Supreme Court challenge around when ballots can be received and still be counted could tie things up even longer.

—Update as of 6 p.m. ET Wednesday: The Associated Press has called Michigan for Joe Biden. The Trump campaign said it was filing suit in the state for better access for its observers to sites where ballots are being processed.